Rev. George Lubbers celebrated his 70th birthday on August 6. Even though “retired,” Rev. Lubbers has been active preaching this summer. Upon request, Rev. Lubbers preached in Randolph, Wisconsin on August 5. Rev. Lubbers was the first pastor of the Randolph congregation, serving from 1944 – 1958. He was also scheduled to preach in Hope (Walker, Michigan), Hudsonville, and Holland during the month of August.

Also this summer, Professor Robert Decker preached in Doon and Hull, Iowa, and Edgerton, Minnesota churches. This was a kind of ‘home-coming’ for Professor Decker, as Doon was his first charge as pastor after graduating from seminary.

Hope Church (Walker) with the Mission Committee is responsible for mission activities in the Lansing, Michigan area. Candidate Steven Houck (who has also received the call to serve as home missionary here) is presently working in this area. A note in their bulletin invited the Hope congregation to attend the mid-week Bible classes held on Wednesday evenings at their meeting place, the University S. D. A. Church, 149 Higland, East Lansing. The Houck’s address is 5737 Pine Ridge, Haslett, Michigan 48840.

The Hudsonville consistory has decided to initiate two changes in the order of worship. First, there will be silent prayer before the service in unison after the consistory and pastor enter the auditorium. The pastor will announce the silent prayer which will be concluded with the playing of the organ. Reasons for the change include: 1) to avoid the confusion of prayer while others attempt to enter a specific row of seats; 2) to encourage also the children to participate in this prayer; 3) to promote unity and oneness in prayer; 4) to conform with the practice of many of our other churches. The second change will be the reading of Scripture after the congregational prayer instead of before the prayer. This is also the practice of many of our churches. It brings the Scriptural passage into a closer relationship to the sermon about to be preached.

Beginning in September, the consistory of our Faith Church in Jenison, Michigan, has decided to allow the deacons to sit with their families during the worship service.

The convocation service of our Seminary was scheduled for September 5 in Southwest Church. Professor H. C. Hoeksema was scheduled to speak on “Pass the Word.”

With the approval of the Church Council, the Evangelism Committee of our church in South Holland, Illinois is planning the second annual series of Reformed lectures for this fall. The dates are October 24, October 31, and November 7. The theme for this series of speeches is, “A Serious Calling to a Reformed and Holy Life.” Scheduled speakers are Rev. G. Van Baren, Rev. M. Joostens, and South Holland’s pastor, Rev. D. Engelsma.

In preparation for the fall meeting of Classis West, the congregation of our church in Isabel, South Dakota was requested to come to church the evening of Friday, August 31 to help clean the church. Due to an anticipated large increase in visitors attending worship services the last two Sundays in July, our congregation in Redlands, California, met in the University of Redlands Chapel. The reason for the influx was the annual Protestant Reformed Young People’s Convention hosted by Redlands. The convention included three main speeches: “Redeeming the Time in the Age of Ignorance,” by Rev. M. Kamps; “Redeeming the Time During the Sex Revolution,” by Rev. D. Kuiper; and ” Redeeming the Time in the Fun Loving Generation,” by Rev. R. Miersma. 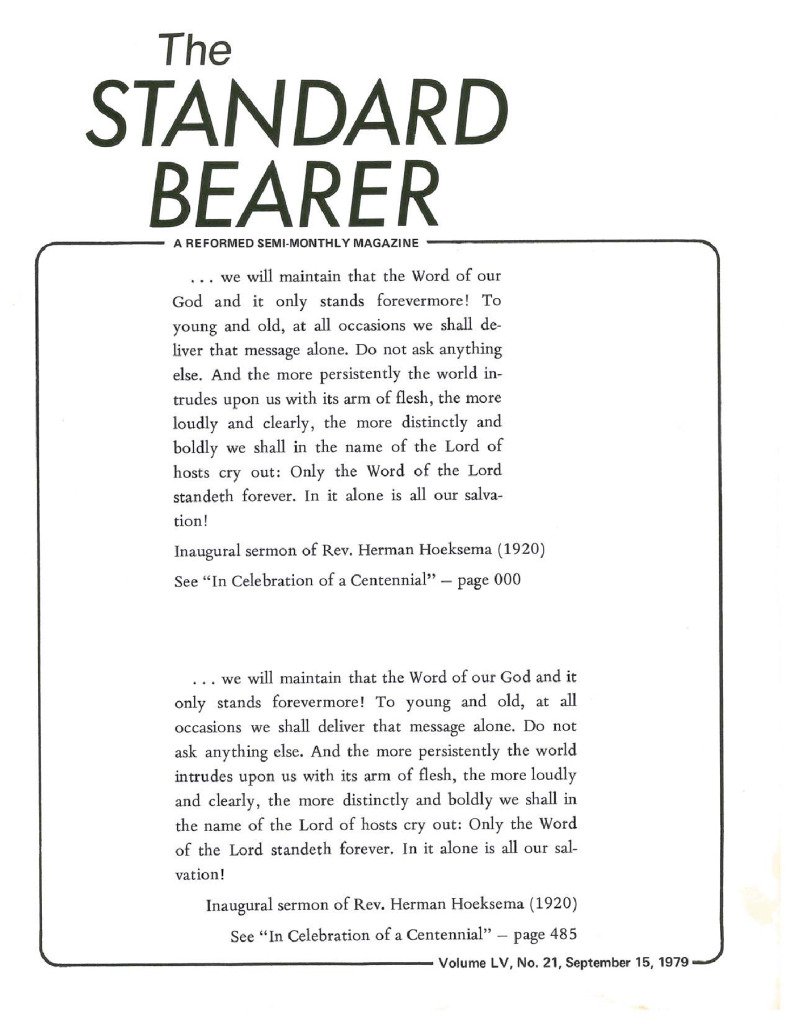