The Hope PRC in Walker, MI, the calling church for the minister-on-loan to Singapore, called Rev. C. Haak (Bethel, Roselle, IL) to be the next minister to replace Rev. J. Kortering in 2002. Rev. J. Laning, pastor of the Hope PRC in Walker, MI, declined the call he received from the Randolph, WI PRC.  Their new trio is Rev. W. Bruinsma (Kalamazoo, MI), Rev. J. Slopsema (First, G.R.), and Rev. R. VanOverloop (Georgetown, Hud—sonville). Rev. C. Terpstra, pastor of the First PRC in Holland, MI, declined the call he had been considering to serve as the next pastor of the Lynden, WA PRC.  Lynden’s new trio consists of the Revs. B. Gritters (Hudsonville, MI), K. Koole (Faith, Jenison, MI), and R. VanOverloop (Georgetown, Hud—sonville).

Classis West met in an extended session in early March, beginning Wednesday morning and not adjourning until late Friday afternoon.  The length of this meeting made pulpit exchanges in many of our congregations in the west the norm for Sunday, March 11.  It almost appeared that no congregation had their own pastor that Sunday.  For example, Rev. R. Miersma (a.m.) and Rev. S. Key (p.m.) led the worship service at the Doon, IA PRC.  Their pastor, Rev. R. Smit, preached in Immanuel PRC in Lacombe, AB; Rev. D. Kleyn preached in Loveland, CO; while Rev. G. Eriks preached in Edgerton, MN (a.m.) and Hull, IA (p.m.) and Rev. R. Miersma preached in Edgerton in the evening.

Rev. R. Moore, our churches’ missionary to Ghana, had the privilege of bringing the Word of God recently to the Morning Star Junior Secondary School.  He was able to speak to about sixty-five students between the ages of 15 and 18 on God’s sovereignty in salvation and all things, also applying this to the exams they will be taking to determine their placement in secondary schools. We are also happy to let you know that, the Lord willing, on Sunday, March 25, the group in Ghana was able to worship in their new building in Ashaley Botwe for the first time.  Plans called for a formal dedication service on the 3rd of April to bring thanks to God.

The first week in March, Elder Ray Ezinga, from the Loveland, CO PRC, the calling church for Rev. T. Miersma, our missionary in Spokane, WA, along with Mr. Gord Terpstra, a member of the Domestic Mission Committee, visited the mission field in Spokane as part of the oversight of our missionary and his work, and also to encourage our missionary, his family, and the group there.

Approximately 70 members of the choir of Covenant Christian High School in Grand Rapids, MI, along with their director, Mr. Andy Kamper, and several chaperons left school in the early morning hours of March 16 for a brief overnight trip to Wisconsin.  They were privileged to give two concerts that afternoon.  First for members of a rest home in Randolph and then for the students of Faith Christian School.  Following refreshments the choir then drove to a hotel located near the Wisconsin Dells and spent the night at an indoor water park before returning home the next afternoon.

On March 16 an open house was held for students and parents interested in attending the new high school which will start, the Lord willing, this fall in Lansing, IL.  This open house was at First Lansing Church of the Nazarene, 2158 E. 175th Street, Lansing, IL.  The event included a dinner of pizza and an opportunity not only to see the facility, but also spend time in the gym enjoying that part of the facility.

Also on March 16, Faith Christian School in Randolph, WI held their annual Hostess Dinner and Program.  This event is a fund-raiser for a school building which Faith hopes to be able to build in about four or five years.

The Promoters of East Side Christian School in Grand Rapids, MI scheduled an Enrichment Program on March 15.  Glen Van Andel, Professor of Physical Education and Recreation at Calvin College, spoke on “Vacations with a Vision, What Christians Should Know.”  Vacations need to be viewed like the Old Testament Sabbath, a period of time when we restore our relationship with God, others, and His creation.

A recent note from the bulletin of the Doon, IA PRC caught our attention.  It appears that during the month of February, Doon was able to celebrate four wedding anniversaries of 50 years or more.  We rejoice with them and pray that these marriages may continue to be worthy examples and beautiful reflections of Christ and His church. 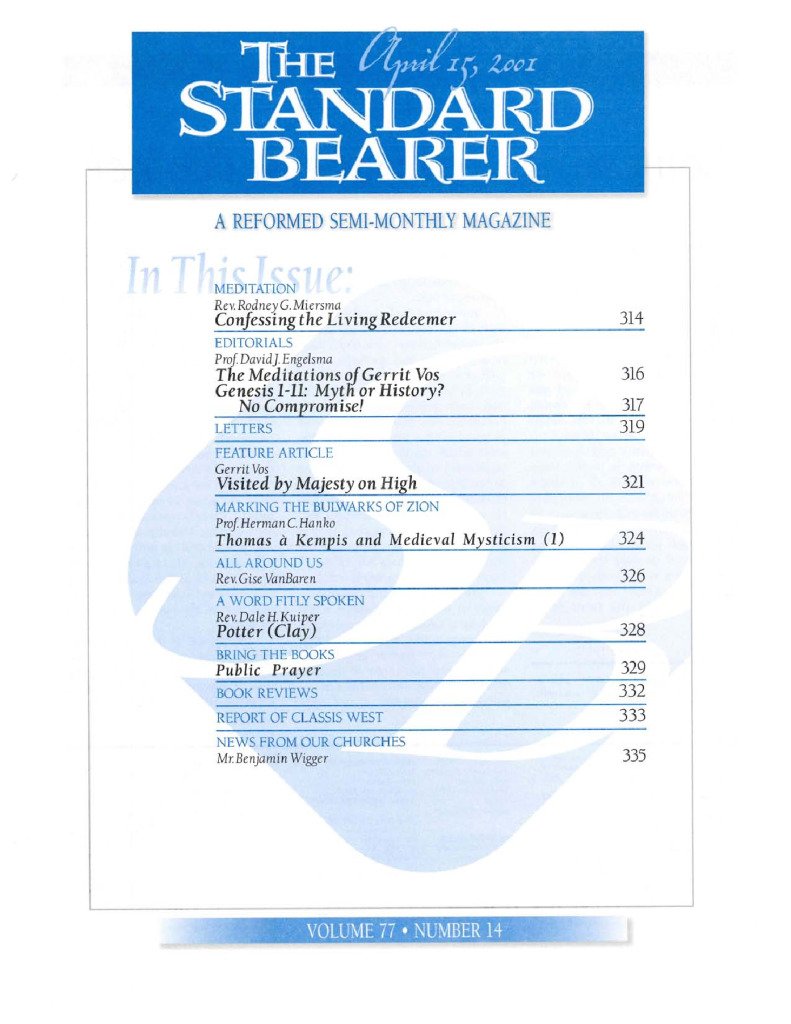