The- Congregation of Edgerton extended a call to Rev. B. Woudenberg; Rev. C. Hanko received the call from Hull: Randolph, chose Rev. H. Hanko from a trio which also included the Revs. G. Vanden Berg and M. Schipper.

REPORT OF CLASSIS EAST held January 6, 1960 at First Church, Grand Rapids, Mich. Rev. B. Woudenberg, chairman of the October Classis, led in devotions. All the churches were represented by two delegates except Grand Haven which had only one delegate present.

Most of the matters before Classis were of a routine nature.

A brother addressed a letter to Classis against his consistory which Classis declared was not legally there since no copy of same was given to his consistory and also because his consistory had no time to treat his protest.

Rev. B. Woudenberg was appointed counselor for the church at Grand Haven whose minister, Rev. G. Lanting, had accepted the call to Holland.

The report of the committee to thank the ladies of First Church for their excellent catering services was received for information.

The Questions of Article 41 of the Church Order were asked and answered satisfactorily.

Classis decided to meet next-time on the 6th of April, D.V., in Hope Church.

The chairman made a few appropriate closing remarks, and Rev. G. Vos closed the meeting with thanksgiving.

The Deacons’ Conference was scheduled for January 22 at Hudsonville. The speaker, the Rev. G. Vos, was to speak on the topic, “What are the fundamental requirements of a deacon.”

Holland’s congregation is announcing the completion of the purchase of a parsonage to house their new minister’s family. It is located at 111 E. 22nd St., Holland, Mich.

“Saved By Grace” was the title of the hymn sung at the Jan. 14th meeting of the Hope Prot. Ref. School Circle. The thirty-nine members present sang that hymn “in memory of our beloved sister in the Lord, principal of our Hope School, Miss Alice Reitsma, who was called to her eternal home in the early morning hours on Dec. 21, 1959.” The program sheet handed out at the meeting was headed with this text from Rev. 14:13: “Blessed are the dead which die in the Lord from henceforth; yea, saith the Spirit, that they may rest from their labors; and their works do follow them.”

From Hope’s bulletin, announcing a collection to be taken to help Lynden pay for their parsonage: “We who have property of our own ought to help our fellow saints who have not, especially when it is difficult for them to pay for such large projects. In this way we reveal the unity of faith and love.”

From Lynden’s bulletin, the Sunday that Lord’s Day 45 was treated: “Nothing is revealed to us to be expected from the Lord for which we are not likewise enjoined to pray; so true it is that prayer digs out those treasures which the Gospel of the Lord discovers to our faith.” (Calvin)

We note from the bulletins that many of our churches have issued their 1960 Church Directories; the first one to reach us was from Doon’s pastor; that directory also includes in its last pages the birthday and wedding anniversaries of the members of the congregation.

Finally, this comforting passage from Holy Writ, “There are many devices in a man’s heart; nevertheless the counsel of the Lord, that shall stand.” Prov. 19:21 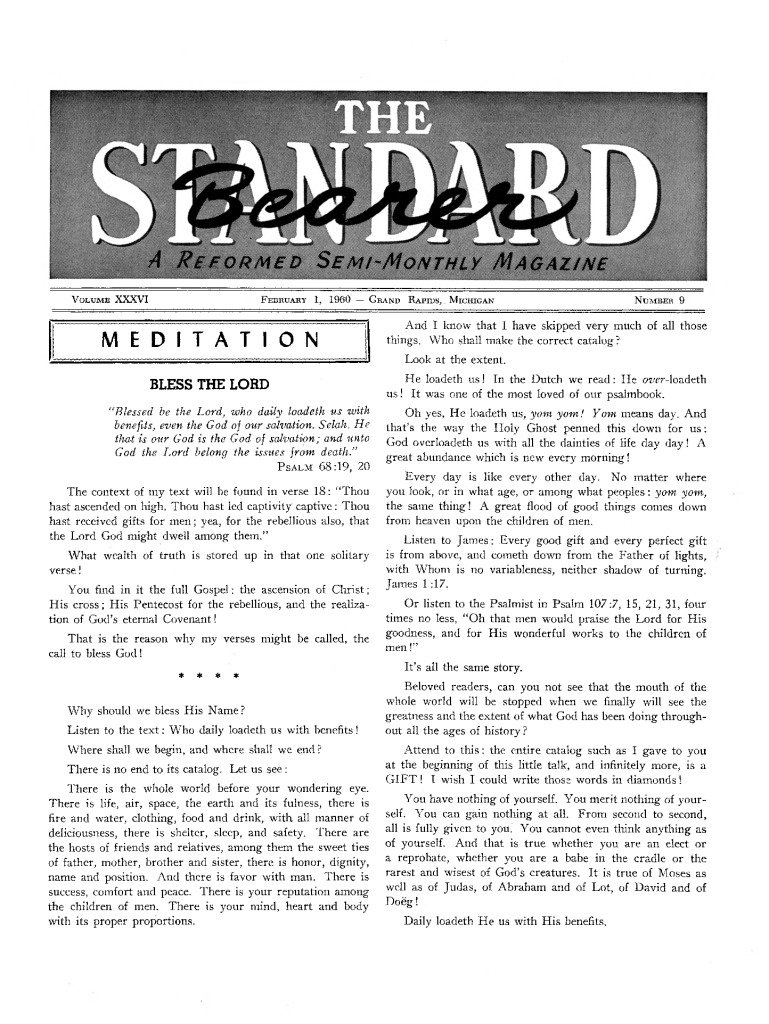