Candidate Steven Houck has accepted his call from Hope in Walker, Michigan, to serve as Home Missionary in the Lansing—Charlotte, Michigan, area. Candidates Houck and Carl Haak were examined by Classis East on September 12. Candidate Haak was installed as pastor of Southeast Church in Grand Rapids on the evening of September 13.

Candidate Ronald Cammenga was examined by Classis West during their regular fall meeting held on September 5 in Isabel, South Dakota. No doubt candidate Cammenga has been installed by now as pastor of our church in Hull, Iowa. Reports on these Classis meetings should be forthcoming soon.

Rev. Arie den Hartog, pastor of our church in New Jersey, has accepted his call from Doon, Iowa, to serve as foreign missionary in Singapore. This means that he has declined the call extended to him by Hudsonville to serve as ‘minister-on-loan’ to Christchurch, New Zealand.

Just where our Covenant Protestant Reformed Church is in New Jersey is just a little bit complicated. The congregation has been meeting in Prospect Park. The parsonage and official church mailing address and the location of the property on which their new church is to be built is in Wyckoff. Effective on September 9, the congregation has changed their place of worship to the Franklin Lakes United Methodist Church building, 454 Pulis Ave., Franklin Lakes, New Jersey. Services are scheduled at 11:30 AM and 7:00 PM. One of the purposes of this move from the Legion Hall in Prospect Park to a real church building is so that a nursery could be provided during the worship services.

Covenant has extended a call to Candidate Ronald Hanko. Their trio included also Rev. David Engelsma and Candidate Steven Houck. This congregational meeting to call a pastor was scheduled for the evening of September 3, Labor Day.

Covenant has attempted to do quite a bit of advertising in their area. They have advertised their new meeting place in the local paper and have attempted to arouse interest in the two Bible study classes they hold each week by sending out about 5,000 invitations to persons in the local area. The Wednesday class is busy with the study of the miracles of our Lord Jesus Christ. The young couples Bible class held on Friday evenings is using as its study guide the book on marriage by Rev. D. Engelsma.

Rev. C. Hanko commemorates the 50th year of his ordination into the ministry this September. To mark this important event, and to give thanksgiving to God, the consistory of our Hudsonville church has planned a special program for Friday, September 28.

Rev. Robert Harbach is planning to retire in early October. The council of our Hope Church (Walker) is planning a special evening in connection with this on October 5. Rev. M. Schipper will speak and there are special numbers planned. All of this is in order that we may give thanks to God for the many years Rev. Harbach has given to our churches—on the pulpit and on the mission field.

The League of Eastern Men’s and Ladies’ Societies will hold their Fall League meeting on October 1 at Southeast Church. Professor H. C. Hoeksema is scheduled to speak on “The Declaration of Principles: Its History, Content, and Value for Us.” There is a little story connected with the selection of this topic. When the Men’s and Ladies’ Leagues effected a merger a few years ago, they found that they should have a new constitution. It was proposed that the constitution have as its basis the Word of God as expressed in the three forms of unity and the Declaration of Principles. The inclusion of the Declaration caused a bit of discussion among the League Board—and prompted the suggestion that this would be a good topic for a League meeting speech.

Last winter, you may remember, First Church in Grand Rapids conducted worship services in Bradenton, Florida, as part of their church extension activity. The consistory, through its committee established for that purpose, has been working to re-establish this witness in Florida and have it continue on a year-around basis. Work is now being done to set up a schedule of ministers who can spend a month or more at a time in this area. Services should resume about mid-November in the same location as before—the Manatee Hotel. Rev. Wilbur Bruinsma, pastor of our Faith Church in Jenison, Michigan, is scheduled to be the first minister in Bradenton this fall. 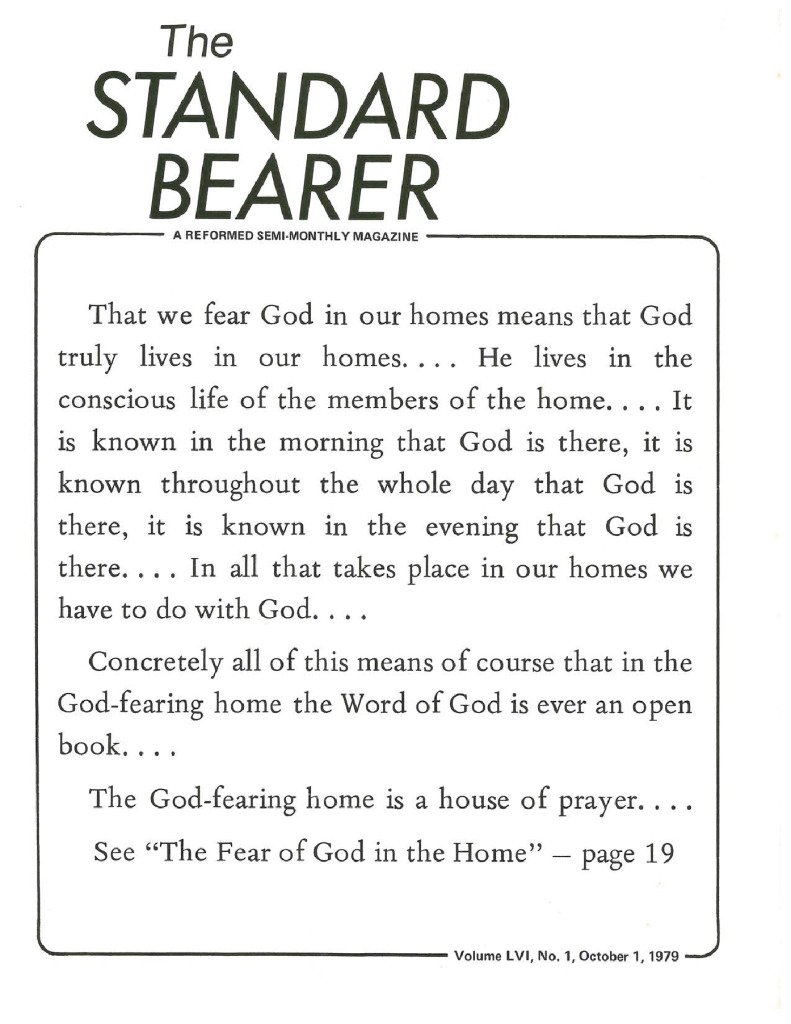