After welcome contributions from the clerks of Classis West and Classis East, it is again up to your news editor to fill this page. There may, however, be another contribution from the clerk of Classis East, as the Classis was scheduled to meet in special session on October 30. This session was called to examine Candidate Ronald Hanko who accepted the call of our Covenant Church in Wykoff, New Jersey to become their second pastor. Their first pastor, Rev. Arie den Hartog, has accepted his call to serve as missionary to Singapore.

Our church in Lynden, Washington formed a trio of Rev. Wayne Bekkering, Rev. John Heys, and Rev. Bernard Woudenberg. A call was extended to Rev. Woudenberg to serve as home missionary in Washington state.

Hudsonville Church has formed a trio for minister-on-loan to Christchurch, New Zealand, consisting of Rev. Bekkering, Professor H. C. Hoeksema, and Rev. Woudenberg. The congregation will vote to call one of these men during the course of their annual congregational meeting at the end of November.

Rev. Bekkering declined the call extended to him by our Hope Church in Grand Rapids.

The former pastor of Hope Church, Rev. Van Overloop, is now serving as home missionary in the Birmingham, Alabama area. The following short report of his work appeared in the South Holland bulletin: “After about two months of being in Birmingham, we can report that we believe things are going very well. We have been holding worship services twice a sabbath in a meeting room of the downtown Holiday Inn. We are also conducting mid-week meetings in various homes. We are experiencing the Lord’s blessing for we are learning what is involved in the work and how best to perform it. For that we earnestly covet your continued prayers. ” You may write to the Van Overloop family at 5080 Sunny Dell Drive, Hueytown, Alabama 35020. They would be more than. pleased to receive your letter.

The installation service for the new pastor of our church in Hull, Iowa, Rev. Ronald Cammenga, was conducted by Rev. Marvin Kamps in Hull on September 12. A welcome program for the Cammenga family was held on Monday evening, September 17. After the program, a lunch and social hour took place in the Hull Christian School building.

At the request of First Church in Grand Rapids, the consistory of our Faith Church in Jenison, Michigan has granted permission for their pastor, Rev. Wilbur Bruinsma, to labor in ministerial work for four weeks in the Bradenton area of Florida. The Lord willing, Rev. Bruinsma is expected to be preaching in Bradenton Sunday November 11 through Sunday December 2. Services are, scheduled in the Manatee Hotel. First Church is currently directing this work under its church extension committee and will be sending a number of ministers of our churches there beginning in November.

Since the early ’60s our churches have been conducting mission work on the Island of Jamaica. The 1979 Synod of our churches appointed First Church to care for the Jamaican Mission Field. Since its formation, the Jamaican Missions Committee, appointed by First Church Consistory, has been meeting almost weekly. Time has been spent in reviewing the history and attempting to ascertain the needs of the field and how best to meet these needs. Detailed plans are now being made to send emissaries to Jamaica in January of 1980. Another major goal of the committee is to prepare for the calling of a missionary to Jamaica after the 1980 Synod. This work is being carried out in cooperation with the Synodical Mission Committee and its Jamaican Sub-Committee.

The Reformed Witness Committee of our Hope church is sponsoring a discussion group of Protestant Reformed people which will meet starting on Tuesday, November 6, and meet on alternate weeks at 8:00 PM at the Lamont Christian School in Coopersville, Michigan. The proposed topic for discussion is the 37 articles of the Belgic Confession. The meetings are to be led by Professor H. Hanko.

The fall meeting of the Western Ladies League was held in Doon, Iowa, at 1:00 PM on October 11. Rev. Kamps spoke on the topic “Peace and Hope that Endureth.” The speech was based on Romans 5:5-9. The annual church cleaning in Hull was scheduled for Tuesday, September 25 beginning at 9:00 AM. Cleaners were requested to bring pails, stepladders, and vacuum cleaners. Dinner, however, was to be furnished.

The following is a THOUGHT FOR CONTEMPLATION found in the South Holland bulletin. It was taken from the writings of John Calvin. “God is sought in two ways, either by prayer, or by studying to live a holy and an upright life; and, indeed, the one is always inseparably joined with the other.” 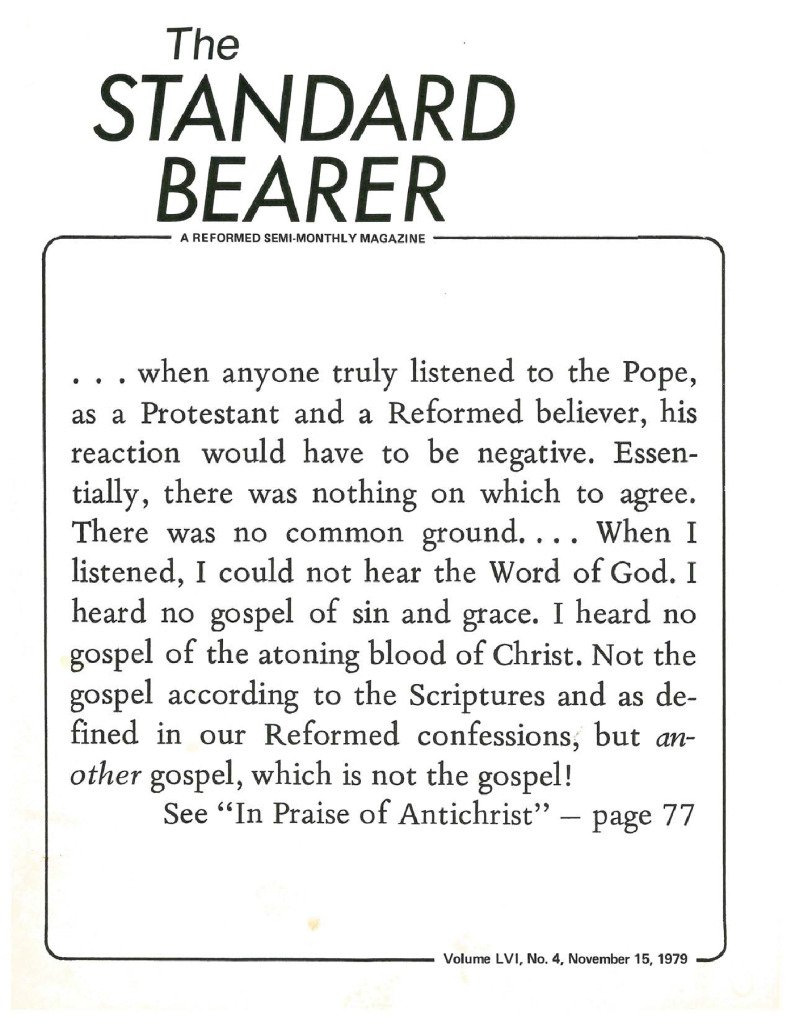