Hope’s congregation held a 50th Anniversary celebration, recently, and the celebrants included the one remaining charter member, Mr. Richard Newhouse. The main speaker on the program was Rev. D. Engelsma, a son of the church. Greetings were given by former pastors, Revs. H. Hanko, H. Veldman, and J.A. Heys. Rev. Kortering conducted the opening devotions. Mr. John Moelker rendered the organ prelude and postlude; a piano-organ duet by Lois Engelsma and Bonnie Meulenberg, and singing by a mass choir composed of the Hope Heralds and the Choral Society completed the program. The children of the late Rev. G.M. Ophoff, Hope’s first pastor, were also invited to share this occasion with the happy congregation. Rev. Heys made some closing remarks and led in prayer. The Anniversary Booklet included a brief history of the church, pictures of the lone charter member, their present and the former pastors, the old—the re-built—and the new churches. The message from their pastor found in the booklet concluded with this paragraph: “We do not know what lies ahead. We learn from the past that even though there were moments when our shout of ‘Ebenezer’ had to be mingled with tears, Jehovah never forsook us. Our calling today is not to ‘try and carry the load of the future by anticipating what trials may be our portion, no, we must walk by faith and say, ‘Hitherto hath the Lord helped us.’ Having reviewed the past, let us rejoice in the present and be renewed in courage to press on, placing our trust in Jehovah’s promises. Ebenezer! This is our shout of victory for time and unto all eternity!”

Five young people made public confession of faith in Doon’s afternoon service, May 5. Their pastor chose I Peter 5:8, 9 as his text, preaching on, “Exhorted to Vigilance,” suitable for young and old; but specially directed to those who would be celebrants at the Lord’s Table for the first time the following Sunday.

Lynden’s pastor, Rev. Woudenberg, has inaugurated a group discussion series with “Understanding Ourselves in Relation to Others” as the subject to be discussed. Two groups have been formed, one meeting on Tuesday evenings and the other on the following evening. This is quite a challenging undertaking and will, no doubt, be very beneficial to all the members, especially because this psychology study will be under the direction of a minister of the Gospel who uses the Bible as his text-book.

The Reformed Witness Hour has secured another outlet—this one in Lynden, Wash., on station KLYN-FM. May 5 carried the sermon of Prof. H. Hanko on “Submission to Government,” the answer to the spirit of lawlessness prevailing in the world today. This station is also being used by Lynden’s small congregation as a witness by broadcasting a taped service of the previous week. The musical portion of the program is by the Radio Choir of Grand Rapids, and has been spliced into the hour-long tape which carries the sermon of Rev. Woudenberg of the past Sunday. This service is on the air at 2 P.M. and the Reformed Witness Hour is at 4 P.M. each Sunday. Congratulations, Lynden!

The above paragraph naturally calls our attention to the great amount of work that is accomplished by a small number of people on the Radio Committee. This dedicated group of workers tirelessly perform the duties related to the taping of sermons, mailing of tapes, securing the speakers, the purchase of prime time on your local station, paying the bills, and making decisions which result in flawless radio programming. Have you ever sat down to write the Radio Committee a letter of appreciation? Our program is one of the few which does not beg for responses—so our responses must be voluntary. Will you be such a volunteer this week? The address is: The Reformed Witness Hour, P.O. Box 1230, Grand Rapids, Mich. 49501.

Redland’s May 5 bulletin carried a reminder for the young people of the Young People’s Convention to be held in far-off Grand Rapids, Mich., in August. That is quite an event for their delegates, to which they can look forward!

The League of Mr. and Mrs. Societies met Friday evening, May 10, in Southwest Church. Prof. H.C. Hoeksema was the speaker, who was asked to speak on, “Our Calling as Reformed Christians with respect to Social and Political Involvement.” Special music was provided by a male quartet, and refreshments were served in the renovated church parlors.

Hudsonville’s congregation shared in celebrating the 95th birthday anniversary of one of their members, Mr. Cornelius Woudwijk, with an “open house” in the church basement from 3 P.M. to 9 P.M. May 1.

Joanna Schwarz, 5th grade reporter of Loveland’s school Ledger, writes, “The boys are digging a tunnel in the ground,” but neglects to divulge the aim of the other end of it. Could it be a secret return to the schoolroom? From the same Ledgerwe learn that their school has existed seven years, with four grades for the first few years, and now including six grades. The last increase necessitated the moving of a wall of the schoolroom in August of 1967. The Ledgerreveals an ever-increasing awareness of the desirability of additional grades as soon as it becomes economically possible. 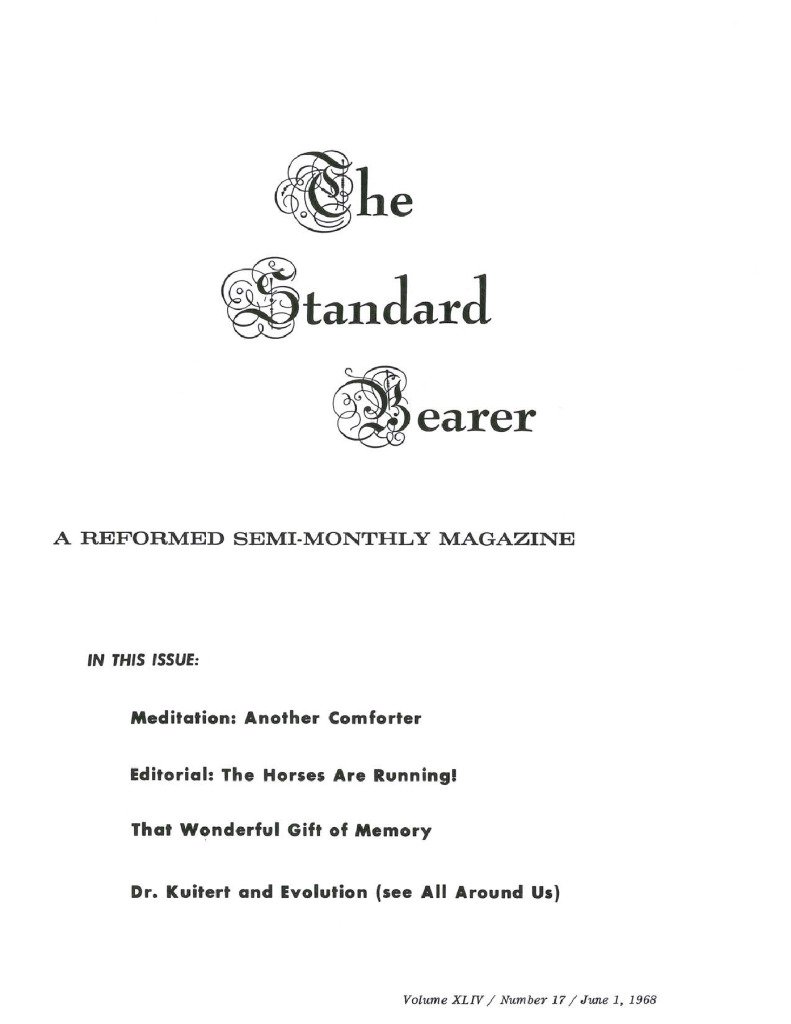