Mr. Wigger is a member of the Protestant Reformed Church of Hudsonville, MIchigan.

Rev. Michael DeVries, pastor of the Wingham, ON, PRC, declined the call he had been considering to serve as our churches’ next missionary to the Philippines, and the Berean PRC.

On Sunday morning, September 2, Rev. Rodney Kleyn announced to his congregation, the Trinity PRC in Hudsonville, MI, that he was declining the call he had been considering to serve as missionary in Sioux Falls, South Dakota.

A special congregational meeting was held August 22 at the Wingham, ON, PRC. The purpose of that meeting was to consider a proposal from their consistory regarding submitting an offer to purchase the Lucknow Christian School property. At this special meeting it was unanimously decided to submit an offer for the purchase of the school property. However, Wingham was notified the following week that Lucknow Christian School had received an offer substantially higher than theirs, which they would pursue at this time. In all these things may we ever commit our way unto the Lord.

The congregation of Immanuel PRC in Lacombe, AB was informed that the Board of Genesis PR School had found an alternative facility in town for their school. In the Lord’s providence, a vacant church building in town became available in late August, and now the school plans for the 2007-2008 school year to rent and hold classes in that facility instead of in their own church building. For this positive development the Immanuel congregation gives humble thanks to our heavenly Father, who again shows that He faithfully and amazingly supplies all our needs (Phil. 4:19).

Members of our churches in Iowa and Minnesota were reminded to reserve Labor Day morning, September 3, for a pancake breakfast for the Midwest Society for PR Secondary Education. Not only was the breakfast good, but those who attended enjoyed good Christian fellowship, and had the opportunity to support a worthy cause, all at the same time.

At the request of Faith Christian’s Education Committee and School Board, the consistory of the Randolph, WI PRC has given their pastor, Rev. Doug Kuiper, permission to teach Bible in the lower room for the 2007-2008 school year, if no full-time teacher is hired by the start of the school year.


Christianity on Campus and Grace PRC of Standale, MI had separate booths at Grand Valley State University’s annual Campus Life Night on September 4. The booth, hosted by members of Grace, was there to introduce and welcome students to Grace and their worship services, and to invite students to the weekly meetings of C on C held on the campus of GVSU each week.

The Bible study at Trinity Christian College in Chicago, IL, begun last year by Rev. Jai Mahtani and the congregation of the Bethel PRC in Roselle, IL, will continue this school year. Pastor Mahtani planned to meet with all interested students the first Thursday of each month at the Alumni Hall classroom. The first meeting was scheduled for October 4 at 6:00 P.M. All PR students attending Trinity were encouraged to attend and also to invite others to join this Bible study.


This year’s annual Seminary Convocation, marking the beginning of another school year for the preparing of men for the ministry of the gospel, was held September 5 in the auditorium of the Grandville, MI, PRC. Prof. Ronald Cammenga spoke on the topic, “The Reformed Minister as Man of God.” The Hope Heralds once again this year provided the special music for the Convocation.


Rev. Jason Kortering, one of our denomination’s “retired” pastors, along with his wife, planned to move to Sioux Falls, South Dakota, and the Heritage PR Fellowship, the last week of August. Plans called for Pastor Kortering to preach and work in that mission field until the middle of December, or until a full-time missionary is obtained through calls extended by the Edgerton, MN PRC.


We can only imagine the mixed emotions going through the hearts of the South Holland, IL congregation on Sunday evening, September 2, when they met together for the final time in their recently sold church building. Their pastor, Rev. Allen Brummel, preached a confession of faith/last service sermon from Psalm 48:14. After the service everyone was invited to stay for a song service marking the event. Rev. Brummel read a history of South Holland, and the grade school children sang Psalter 243. There was no coffee that night because all the coffeepots, cups, etc. had been moved out already. In an interesting side note, the South Holland church building had two block faces, one with the date of organization, and the other with the date the church was erected. These were removed and replaced with blank stones. Behind one they found a copper box that was placed there when the church was erected. There were pictures of the consistory and council, bulletins, a copy of a court-ruling about the name of the church, and documents discussing the choices for general contractor. The Lord willing, the block face with the organization date and the original copper box, with updated information, will be used when South Holland builds their new church. 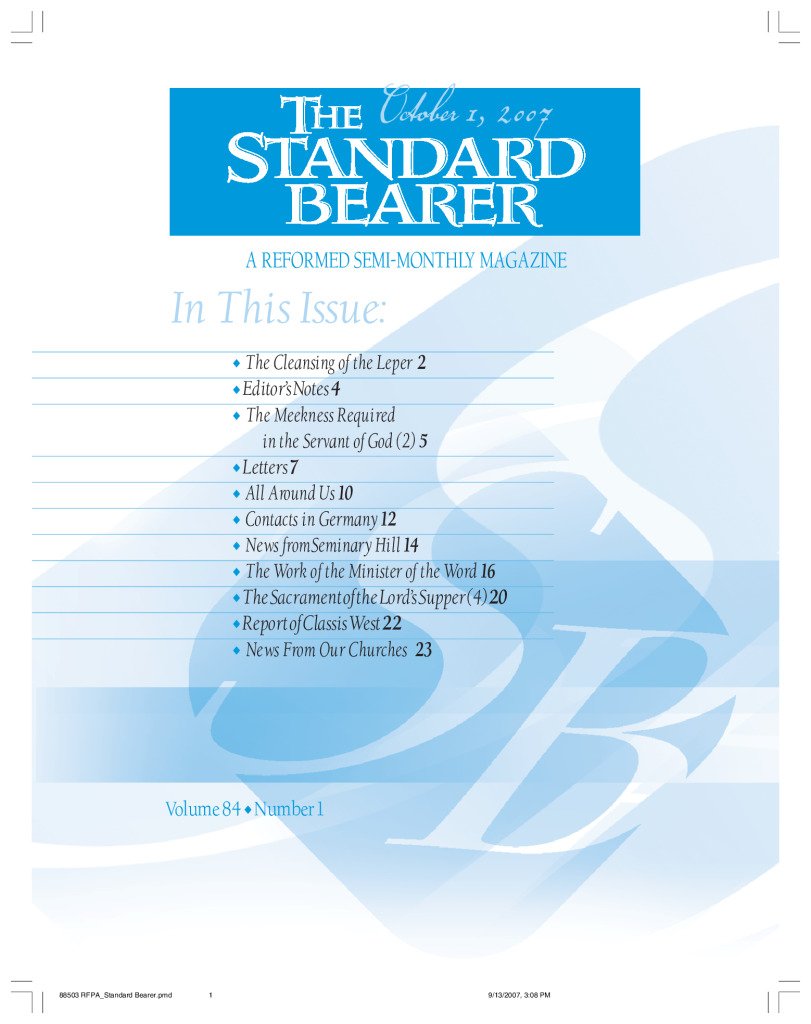