Hudsonville’s congregation was also disappointed March 13 when it was announced that Rev. J.A. Heys of South Holland, Ill. declined their call.

According to the custom in our churches, all our ministers’ are preaching a series of Lenten sermons. Rev. C. Hanko, of Redlands, is treating the passion and death of our Savior from the viewpoint: “Scripture Fulfilled;” while Rev. D. Engelsma, of Loveland, chose for his point of view the “Battling King.”

South Holland’s consistory has appointed a committee to arrange for the dedication of their new church edifice in the near future. This year also marks the 40th anniversary of the organization of their congregation. The souvenir booklet to commemorate this anniversary is expected to contain a pictorial history of the life of the congregation with pictures of former meeting places, consistories, etc. We can soon expect to publish a picture of their new church in the series that has been started in our Standard Bearer.

Jamaican News: Results from the correspondence course undertaken by the Jamaican ministers have already been noted in the hearing of a taped sermon by Rev. Frame preaching the truth embodied in the Five Points of Calvinism. Rev. Frame, himself, expressed his thanks under a Feb. 24th dateline as follows: “I am very glad for this course of instruction. I have learned to know the truth. I am delighted very much in these truths, and I shall teach them to all the brethren of the Protestant Reformed Churches here in Jamaica.” Rev. Heys, instructor of the course, attributes the production of this work, to a great degree, to the help he receives in the typing, mimeographing, and taping of his material by Mrs. R. Meyer, Dale Kuiper and Henry VanderWal of Grand Rapids.

The second in the series bf lectures sponsored by our Mission Committee was held in First Church March 3. Prof. H. Hoeksema spoke to a full house when he lectured on, “The Creation Record—Literal, or Not?” Rev. M. Schipper, chairman of the lecture series, was vindicated as a prophet, having predicted “a packed house if weather conditions are favorable.” Special music was furnished by the Adams St. School Choir; under the direction of Mr. Roland Petersen. The choir sang three numbers after an opening recitative of, “Let the words of my mouth, and the meditation of my heart, be acceptable in thy sight, O Lord my strength and my redeemer.” Mrs. C. Lubbers very capably filled her task at the console of the pipe organ. The speaker divided his lecture into three parts: The Issue at Stake, Various Interpretations of the Record, and, The Proper Scriptural Interpretation. The Professor postulated the real issue to be, Creation versus Evolution; that Evolution is not a mere theory, but an entire philosophy of the world; that it should be beneath the dignity of a believer to enter into debate with an Evolutionist, whose evolution is a monstrosity of sin. The speaker affirmed that the question is not: what the scientist thinks, what this or that theologian thinks, what this or that church teaches, what the early church fathers maintained, what the Confessions say about it (for they are also subject to the authority of the Scriptures); but that the only Court of Appeal is the Bible. The Professor concluded with the statement that the whole question is a matter of Exegesis, and that the exegesis of Holy Writ is an exact science, unbiased except by faith to believe, “In the beginning God. . . .” It was certainly heartwarming to us to see such a large group of people, including Baptists, Reformed, Christian Reformed, and Protestant Reformed, who would come out for a lecture of this type. Truly, we may rejoice that God “has reserved seven thousand who have not bowed the knee” to the Baal of Evolution! The next, and last of the series, will be held March 31 in First Church’s auditorium. The subject: “Genesis and Science.”

Doon’s Consistory and Congregation are anticipating their June guests with eagerness, and possibly with some trepidation. Doon will be host to the 1966 Synod of the Prot. Ref. Churches of America. Their March 6th bulletin already asked for housing for the delegates. They are evidently proponents of the old adage, “a task well begun is a task well done.”

Oak Lawn’s Men’s Society is announcing a public lecture they are sponsoring to be held March 25. Prof. H. Hanko will speak on, “Our Calling with Respect to Ecumenism.”

Rev. G. Lanting, of Holland, Mich. was scheduled to lecture in Edgerton, Minn. on Feb. 28. His topic, “The Place of Confessions in the Church Today.”

The Denver Adult Bible Class, of Loveland’s congregation, has decided to merge with the class that meets in Loveland Thursday evenings. Loveland’s Young People sponsored an ice-skating outing (weather permitting) for Feb. 28. They especially invited all the people of the congregation “who can skate or like to learn to skate” to join them. That was a brave challenge!

Reformed Witness Hour schedule, with Prof. H.C. Hoeksema at the microphone: Apr. 3—”The Suffering Servant and the Father’s Will;” Apr. 10—”The Risen Lord and the ‘Must’ of God’s Counsel.” 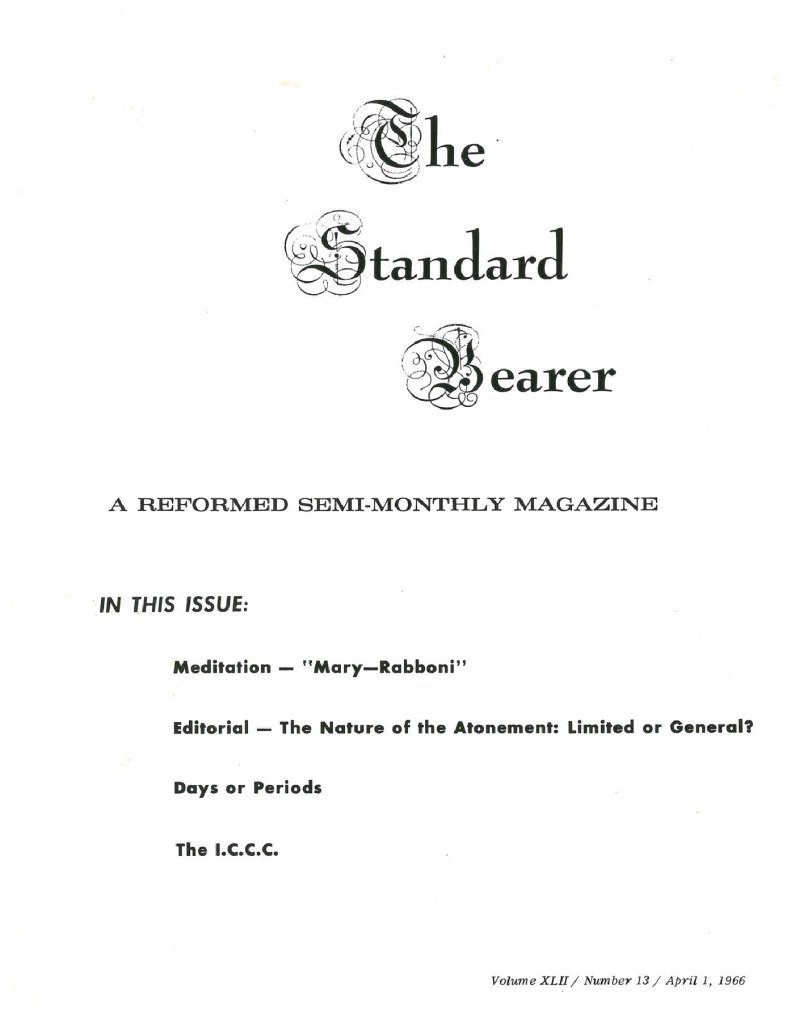