Rev. G. VanBaren was chosen from a trio which included the Revs. C. Hanko and M. Schipper to receive the call from our South Holland Church.

Lynden’s pastor, Rev. B. Woudenberg, combined a Classical appointment to Forbes, N. Dak., with the September meeting of Classis West which was held in Edgerton, Minn.

Holland’s congregation welcomed their pastor back to his pulpit Sunday, Aug. 25, after his stay in Jamaica this summer. Rev. Heys enjoyed his visit and his heavy work-load on the Island again. But he was also happy to be back in his own church, to take up his duties in the new season of activities that awaits him. Everyone is eager to hear about the work accomplished by Rev. Heys and Mr. Feenstra on this trip.

The Dedication of Covenant Christian High School has been scheduled to take place Sept. 19. A program is in the planning, which will include a tour of the building and refreshments.

With the 1968 Young People’s Convention being held in Grand Rapids, there was much activity in First Church. Besides the event specially designed for the young people, parents and friends shared with them three evenings of speech and song: a pre-convention hymning, a Friday evening Mass Meeting and the next Sunday’s convention hymning. These brought out large and enthusiastic crowds. The Mass Meeting was held on a hot, sultry evening which also produced an electrical storm accompanied with hard winds. The Keynote Speaker was Rev. G. Lanting, of Edgerton, Minn. His topic was “How Great Thou Art—in Creation.” Prof. H. Hanko gave an afternoon send-off speech; Rev. VanBaren and Rev. C. Hanko provided the other main’ speeches; the former’s topic was “How Great Thou Art—in Salvation,” and the latter’s topic was, “How Great Thou Art—in Glorification.”

The Convention’s theme, “How Great Thou Art” was also carried out at the two hymn sings. The song leader at the first one, Arnold Dykstra, and Chas Westra, who led the second sing, chose the songs in harmony with the three divisions of the theme as it was reflected in the main speeches. There were many special numbers by talented young people. Some of them were, a tenor solo by Gary Bylsma, a trumpet solo by John Hoekstra, a violin solo by Mary Klop, a reading by Pat Kamps which was a meditation by the late Rev. H. Hoeksema written up in a 1926 issue of the Standard Bearer, a piano-organ duet by Ellen and Mary Kregel, another piano-organ duet by Linda Ekema and Shirley Gritters, and a sextet of girls who sang an excerpt from Etc. 12. The Kregel sisters accompanied the singing at both sings. The 1968 Convention was labeled a success, and the young folk are already looking ahead to next year. Their gaze is fixed to the West, as far west as they can go, for Redlands, California beckons them.

Randolph’s 25th Anniversary celebration was a joyous occasion for them and for several visitors from Grand Rapids who shared the festivities with them. Saturday’s event was held in Fond du Lac County Park and included a potluck dinner and program. Mr. Dewey Alsum, vice-president of the Consistory opened the afternoon program with prayer, followed by audience singing and a special number by representatives from the Adult Bible Class. A taped message from Rev. C. Hanko was heard in which he related several interesting facts about the origin and inauguration of the congregation, a part of their history in which Rev. Hanko played no little part. The clerk of the Consistory gave a more detailed account of the church’s history, its joys and sorrows, their pastors, and the periods of vacancy, as well as their appreciation of their present pastor, son of Rev. H. Kuiper who served them from 1951 to 1954. Then a letter was read from Rev. G. VanBaren who served them three years until 1965. A speech by Rev. D. Kuiper was followed by a reading by Tim Tamminga of the Y.P. Society. Before Rev. Lubbers, Randolph’s first pastor, closed the program with prayer, he called upon three members of the congregation to sing “Consider the Lilies” a repeat of a number given at Rev. Lubbers’ Installation program. This was a surprise number, even to the trio which sang it—and the pianist, all who did this without benefit of a music book! Twenty-five years did not erase it from their memory. The piano was trucked from Bill Huizengas for the day, but it was reported that the lady of the house wanted it moved to another spot anyway, so it went there by the way of the County Park. Sunday’s commemoration was in the regular worship services, both of them led by Rev. Lubbers, the one sermon based on Ex. 14:15, and the other an exposition of II Peter 1:19-21. The readers of the Standard Bearer congratulate you, Randolph, and wish you the blessings of the King of His Church until He returns on the clouds of Glory!

Pure religion and undefiled before God and the Father is this, To visit the fatherless and widows in their affliction, and to keep himself unspotted from the world. 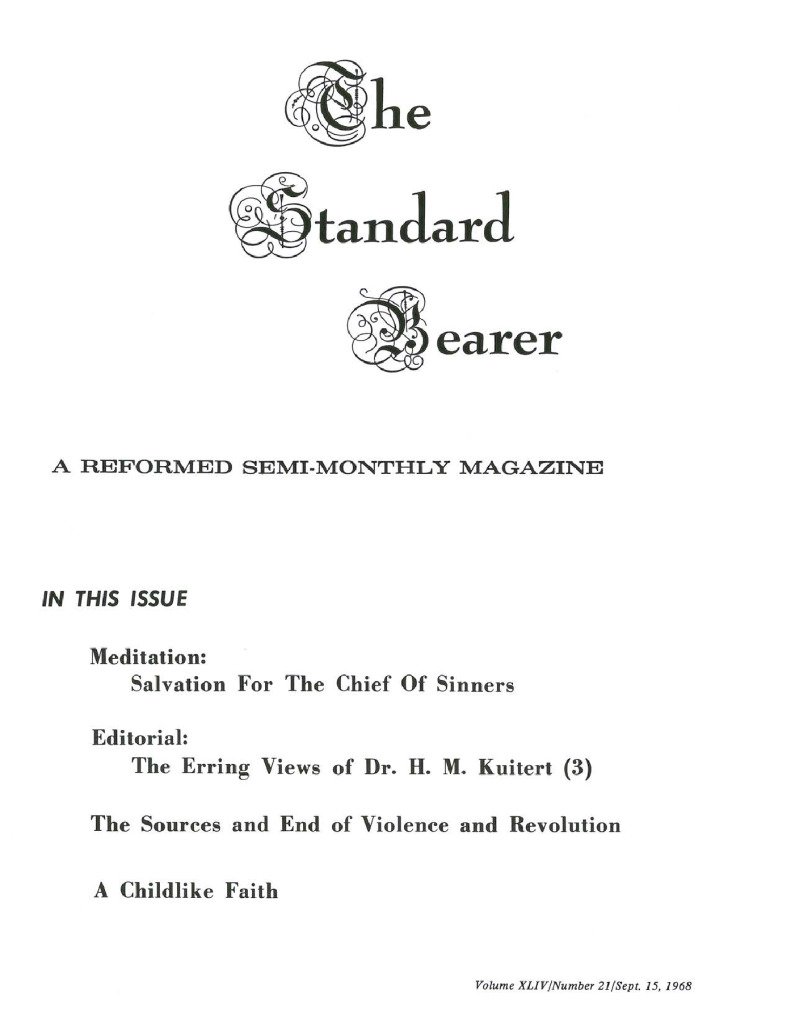