Immanuel PRC in Lacombe, AB, Canada now has its own web site at www.reformedalberta.ca. The site not only introduces and gives directions to Immanuel, but is intended for the purpose of evangelism throughout Canada. It contains a wealth of material, including the confessions with full proof texts, entire books, and most of the pamphlets of our churches. There are many areas that are still “under construction,” and new material will be added as time permits. Take time to check out this valuable resource, to which you can also refer family and friends.

The Building Committee of Providence PRC in Hudsonville, MI invited the men and women of their congregation to attend a PowerPoint informational meeting on Monday, May 3, at Heritage Christian School. The presentation consisted of possible scenarios of purchasing an existing facility, or purchasing land with the intent to build a facility, along with costs, budget scenarios, Building Fund amounts, and number of years and number of families needed to achieve these goals.

With thanksgiving to God, we join with the readers of the Standard Bearer in celebrating the organization of our new congregation in Sioux Falls, SD. On April 23, Rev. Dennis Lee, pastor of the Edgerton, MN PRC, the calling church for our denomination’s mission work in Sioux Falls, led the service, preaching from I Peter 2:4-6, under the theme, “Lively Stones Built Up a Spiritual House.” A collection was taken for the newly organized Heritage PRC Building Fund. The event was held in the Starlight Room of the Holiday Inn, City Center in Sioux Falls. Heritage becomes the 31st congregation in our small denomination, and the first in South Dakota in 18 years. A congregational meeting was held immediately after the service, at which two elders and one deacon were elected out of the fifteen charter families, to provide spiritual leadership for the new church. The roster of the newly organized congregation will include thirty confessing members and ten baptized children. And Rev. Brummel accepted their call to serve as their first pastor.

The congregation of Trinity PRC in Hudsonville, MI invited their community and our area churches to a conference, “Equipping Ourselves for the Office of Elder,” on April 30 and May 1 at Trinity PRC. Prof. Robert Decker spoke on “Shepherding,” and Mr. Deanne Wassink spoke on “Equipping Ourselves for the Task of Counseling.” There was also a panel discussion on the office of elder. The conference was streamed live at www.trinityprc.org.

On Thursday evening, April 15, the congregation of First PRC in Edmonton, AB, Canada approved a proposal presented by their council to install new furnaces and ducting in their church. The work is scheduled to be completed in early June, hopefully well before needed.

The Peace PRC in Lansing, IL hosted a Marriage Conference at their church on April 30 and May 1. Prof. Barry Gritters spoke on “God’s Will for Marriage”; Rev. Ron VanOverloop spoke on the theme, “The Calling of Husband and Wife”; and Rev. Garrett Eriks spoke on “Building Your Marriage.” The two-day event also included time for questions and answers, coffee breaks, and good Christian fellowship.

Heritage Christian School in Hudsonville, MI extended an invitation to their support family to come together on May 1 to celebrate and give thanks and praise to God for twenty-five years of Christian education. A great day was planned, with a focus on a program in mid-afternoon, with a special number by the kindergarten and first grade students and a keynote message by Rev. David Overway, a member of Heritage’s first graduating class. The day also included games and dinner.

Eastside Christian School in Grand Rapids, MI sponsored a meeting on April 26, featuring Mr. Don Vander Ark, a respected educator and former Christian school principal in Western Michigan. Mr. VanderArk addressed school board members and future school board members concerning the what, why, and how of being a board member. This helpful meeting also included a question and answer period.

The Young People’s Society of First PRC in Holland, MI scheduled their bike-a-thon fundraiser for this year’s convention for Saturday, May 1. Holland’s congregation was also invited to join in biking the twenty-six miles with the young people. 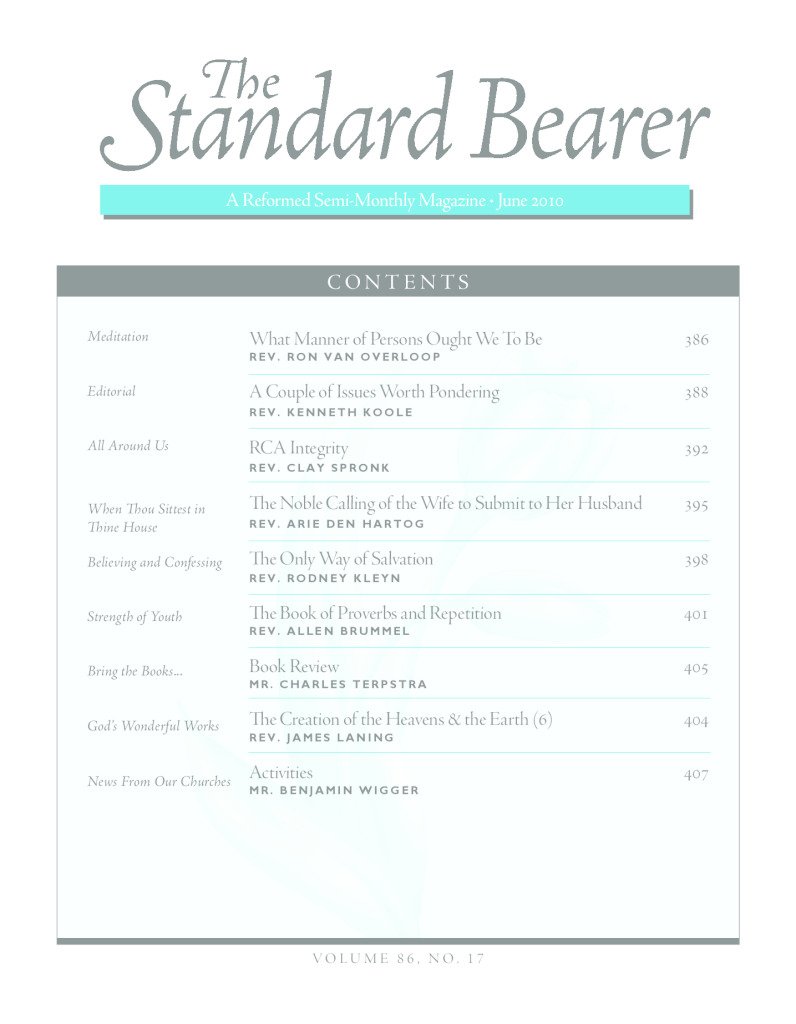