By our count, this was the 70th annual convention, and the 8th sponsored by the Hudsonville, MI PRC. This year’s convention developed the theme, “The Truth Shall Set You Free,” based on John 8:32. Rev. G. Eriks spoke on “Free from Sin’s Bondage”; Rev. R. VanOverloop spoke on “Set Free by Christ’s Death”; and Prof. B. Gritters spoke on “Set Free to Live Obediently.” Overall, the convention went very well, even with a few glitches, like losing power the last night, the death of a fish, and a few who were sick or had sprained ankles, etc. About 360 conventioneers and about 40 chaperones, plus Hudsonville’s support staff, enjoyed a week of edifying fellowship together, behaved in a godly way, and left Friday morning refreshed spiritually, although very tired. We look forward to hearing our young people who attended tell about their experiences. It is our prayer that the Lord may use this week to strengthen the bonds of faith and love among our youth.

We should also add here that, the Lord willing, the 2011 Young People’s Convention will be hosted by the congregation of the Randolph, WI PRC. The convention will take place on August 8-22 at the Green Lake Conference Center in Green Lake, WI. Visit Randolph’s web site for more details: www.randolphprc. org.

The Young People’s Society of the Faith PRC in Jenison, MI sponsored their 3rd annual Beach Volleyball Tournament on Saturday, July 17, at Holland State Park. This event was held before the August convention, but was the first fund-raiser by Faith’s young people for the 2011 convention. We mention this to remind all of us that fund-raising for conventions has now become a year-round event. So support your young people when you have the opportunity!

The young people of the Calvary PRC in Hull, IA enjoyed what Calvary called a Survivor Camping experience on August 6 and 7. Even though details of the event are somewhat unclear, we are happy to report that Calvary’s bulletin, the following week, reported that there were survivors.

The Adult Fellowship Society of the Hope PRC in Redlands, CA met together on Saturday, August 21, for a time of fellowship and swimming at Huntington State Beach. Lunch was served around 1 p.m., with Fellowship members asked to bring a dish to share, along with lawn chairs and drinks. Water for swimming was provided.

The congregation of Heritage PRC in Sioux Falls, SD sponsored a booth at the Sioux Empire Fair the week of August 10-14. Heritage members were encouraged to get involved in this endeavor by making time to sit at the booth sometime during the week. We also note here that in Heritage’s bulletin the week following the fair we read that the experience served as a powerful reminder that God alone is able to soften hearts, and that any fruit of their labors at the fair is of His grace and goodness alone. Heritage rejoiced that God was pleased to use them in strength and weakness as means to fulfill His will.

The Consistory of the Heritage PRC also recently approved Heritage’s hosting a Senior’s Retreat in Sioux Falls in 2012, D.V.

The congregation of the Georgetown PRC in Hudsonville, MI was invited to stay after their evening worship service on August 8 for a potluck supper. After going through the line and getting their supper, the congregation heard a brief update from their India Outreach Committee on their on-going work there and how the Lord alone spreads the precious gospel. The short program also included one special number.

The congregation of the Immanuel PRC in Lacombe, AB, Canada enjoyed a church campout for three nights on August 2-4 at the Lakeview Group Camping site at Aspen Beach Provincial Park. Even if members could not camp, they were encouraged to join those who could for supper and group devotions around the campfire each evening. The three-day event also provided an opportunity for Immanuel’s annual church picnic.

A Men’s Bible Study began at the Grace PRC in Standale, MI in mid- July. Plans called for the men to meet on Friday mornings at 6 a.m. at a nearby restaurant. The men started their study in the book of Mark.

The first worship service held in the new church building of the South Holland, IL PRC was on August 22. A dedication service was scheduled for September 17.


Saints from Northern Ireland, the Republic of Ireland, Scotland, Wales, England, Germany, Spain, Portugal, France, Italy, China, the United States, and more, enjoyed the 11th Biennial British Reformed Fellowship Family Conference in South Wales on August 7-14. Profs. D. Engelsma and H. Hanko spoke on the theme, “The Word of God for Our Generation,” speaking on topics such as, “The Reformed Believer and Money,” “The Sexual Revolution,” and “Toward a One-World Government.” There was also opportunity for swimming, tours, and trips. May God bless the outreach of this conference for the good of His people worldwide.


On Sunday evening, August 22, the Trinity PRC in Hudsonville, MI extended a call to Rev. Doug Kuiper to “come over and help.”

Rev. M. DeVries preached his farewell sermon on August 22 as pastor of the Wingham, Ontario PRC. He preached from II Thessalonians 2:13, 14 under the theme, “A Secure Church in an Anti-Christian World 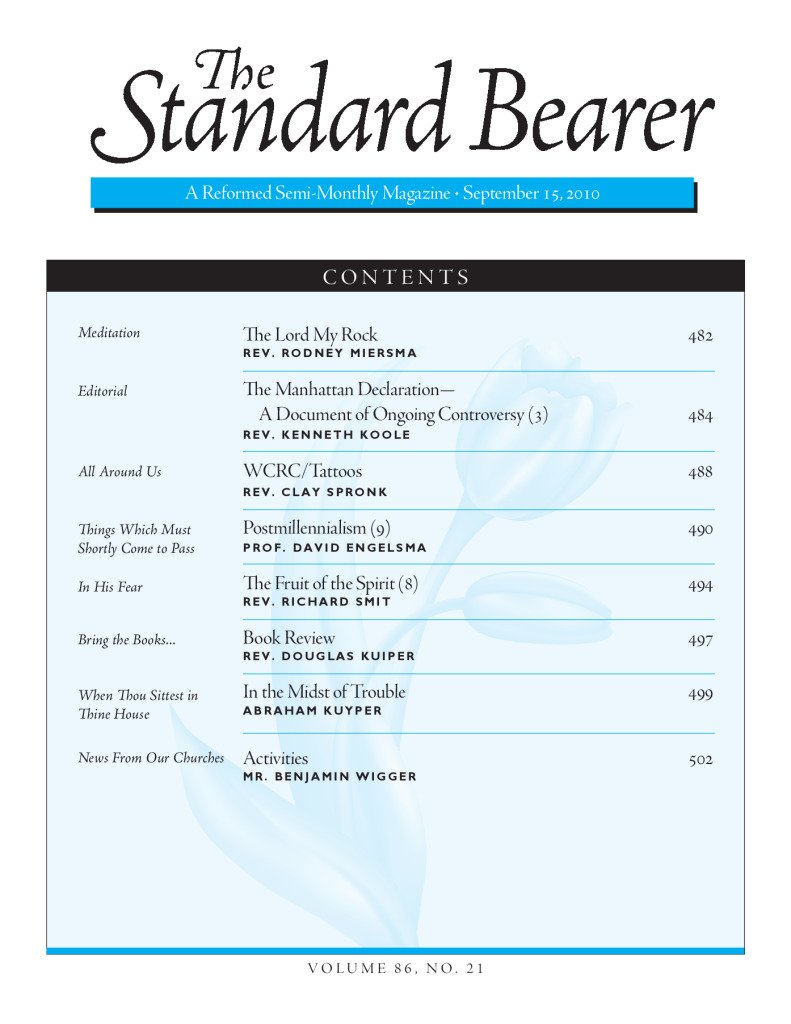