Our missionary pastor, Rev. Robert Harbach, now has a more ‘permanent’ address. The Harbachs have rented an apartment at 55 Bay Street, Victoria, British Columbia V9A 6X9 Canada. Rev. Harbach is holding regular church services, a mid-week Bible study class in Reformed Doctrine and two catechism classes on Friday evenings, with a third class planned to begin soon. The missionary also visits with those who have expressed an interest in our churches.

First Church in Grand Rapids held a special congregational meeting on October 10 to call a minister from a trio consisting of Rev. David Engelsma, Professor Herman Hanko, and Rev. Ronald Van Overloop. Professor Hanko received the call. The consistory informed the congregation prior to the meeting that Prof. Hanko, were he called and were he to accept the call, would be obliged to complete the year of instruction at our seminary. A farewell program is scheduled for Rev. Van Baren and family on Friday, October 28. The plan at this writing is to hold the installation for Rev. Van Baren in Hudsonville on November 6. Hudsonville is rushing their new parsonage to completion in order that their new pastor may have a place to live.

According to a note in the Isabel, South Dakota, bulletin, the Mission Committee of our churches has decided to ask the consistories of Redlands and Kalamazoo to release their pastors for 4 to 6 weeks in order that they may labor in Jamaica.

Soon after Labor Day in September most of our churches resumed society meetings which had been recessed for the summer months. Some of the churches, including Holland, Michigan, held an inspirational meeting to mark the beginning of the society season. This year, Seminarian DeVries was the speaker. One of the reasons for society attendance listed on the Holland Bulletin was: “We are called, young and old, to redeem the time for the days are evil. And before our covenant God we have an obligation to be busy with the things of His kingdom, building one another up in the faith.”

Holland scheduled a special congregational meeting on October 6. Decisions were to be made concerning the financing of the new church addition and in, regard to covering the floor in the auditorium.

The first Sunday in September our church in Hull, Iowa, switched from an evening service they had scheduled during the summer to an afternoon service at 1:30.

The Hull Protestant Reformed School began with a half-day of classes on August 29 and a Convocation Service in the Hull Church the same evening. Rev. Hoeksema spoke on “The Beginning of Wisdom.”

Another special congregational meeting was called—this time in South Holland on October 3. The Council brought a proposal that the church parking lot be repaved.

Our annual Reformation Day lecture in the Michigan area is scheduled for October 27 in Hudsonville Church. Prof. Hoeksema plans to speak on, “Reformation—Option or Mandate?” 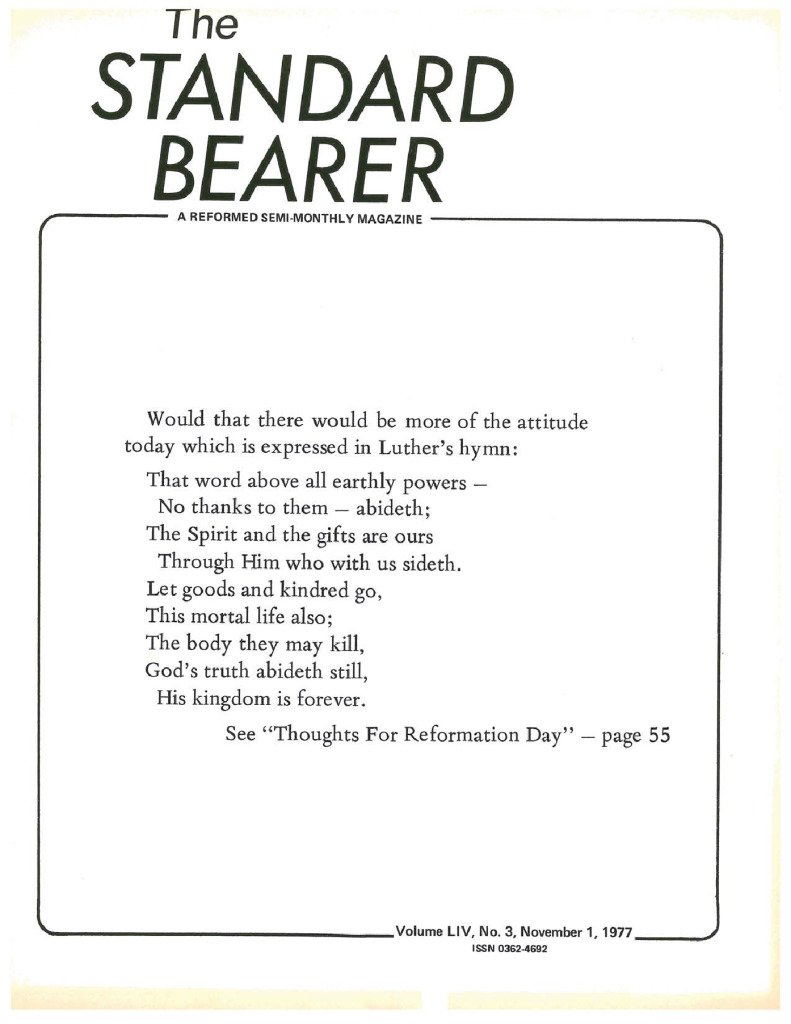