Rev. H. Veldman, of Hope Church in Grand Rapids, has accepted the call to “come over and help us” tendered him by our Hudsonville Church. He plans to take up his new charge within the month.

Rev. G. Lubbers, of the Southwest Church in Grand Rapids, has declined the call which he had received from our Edgerton, Minnesota Church.

Contribution from our Young People over the signature of Mr. Charles Westra, president of the Host Society of this year’s convention:—

The 1966 Convention of the Protestant Reformed Young People’s Federation was held at Southeast Church from August 19 thru the 22nd. The theme, “Faith” and the various subtitles: “Seeds of Faith,” “Growth of Faith,” and “Fruits of Faith” were developed and explored by a series of dedicated ministers and lay leaders in lectures, discussion groups, a debate, and one film presentation.

Several innovations marked this year’s convention; it was held over a weekend, the discussions of the first day were used to acquaint the convention with the topic and thereby make the mass meeting more meaningful, and one major address was worked into the outing schedule. Also the events were scheduled so that each complimented those scheduled adjacent to it, e.g., the recreation events were placed to allow “letting off steam,” thereby preventing restlessness during the more serious meetings.

Some one hundred sixty delegates and visitors registered the first evening, and the number swelled to over two hundred twenty-five by the time of the banquet which marked the end of the event.

The theme was developed with dedication and skill by each speaker; the applications to everyday life were vivid and challenging; the tone of the convention was that of enthusiasm, and the attendance at meetings indicated that the conventioneers were vitally interested. Next year—on to Hull!

News from our own schools is meager at this writing except that Mr. Franklin Block has accepted the post of Principal at Adams; Miss Hulda Kuiper has chosen to leave Oak Lawn to fill a position in Loveland; and Miss Hilda Meelker of Redlands, has signed a contract to teach at Adams.

Doon’s servicemen, Marvin Mantel and Jay Stellinga, write that they miss society and church life in their new vocation. They, like all our servicemen, also confess that they would appreciate letters from the members of their congregation.

Rev. G. VanBaren, pastor of First Church in Grand Rapids, has begun his annual Family Visitation with vigor. The first week he scheduled almost forty calls in five afternoons and evenings. This year he will officially visit the half of his congregation not included in last year’s schedule.

We lifted the following paragraph from Southeast’s bulletin for general interest in our churches:—The song, “Perfect Peace”, written by the late James Jonker, has finally come off the press. If you are interested in obtaining a copy of this sheet music please contact Mrs. H.C. Hoeksema, 1842 Plymouth Terrace, S.E., Grand Rapids, Mich. The price is fifty cents, and the family has stipulated that the proceeds will go to the Protestant Reformed Scholarship Fund.

The latest publication (pamphlet) of “The Reformed Witness” is a dissertation by Rev. B. Woudenberg, of Lynden, Wash., on, “The Totality of Sin.” Those on their mailing list who carefully read this pamphlet will surely be pleased to note that there still are ministers who dare to preach the truth of the totality of sin as it has overcome all men. This sin, this division between God and Man, wrote Rev. Woudenberg, “all began in Paradise, or even before that, in heaven when Satan and his cohorts aspired to take over the throne of God. From there it spread to the earth into Eve first, and then to Adam until they too were instilled with the ambition to be ‘as gods’, to take the right and authority of the Most High as their own. And this spread has continued, It has permeated the whole human race, each individual and the thrones of nations . . . . ” Do you agree?

First Church of Grand Rapids, has announced a special congregational meeting to call a Missionary from a trio which include, the Revs. R.C. Harbach, J.A. Heys and M. Schipper. Besides that item of business, approval will also be sought on several proposals dealing with improvements on their property and use of their Mission Endeavor Fund. 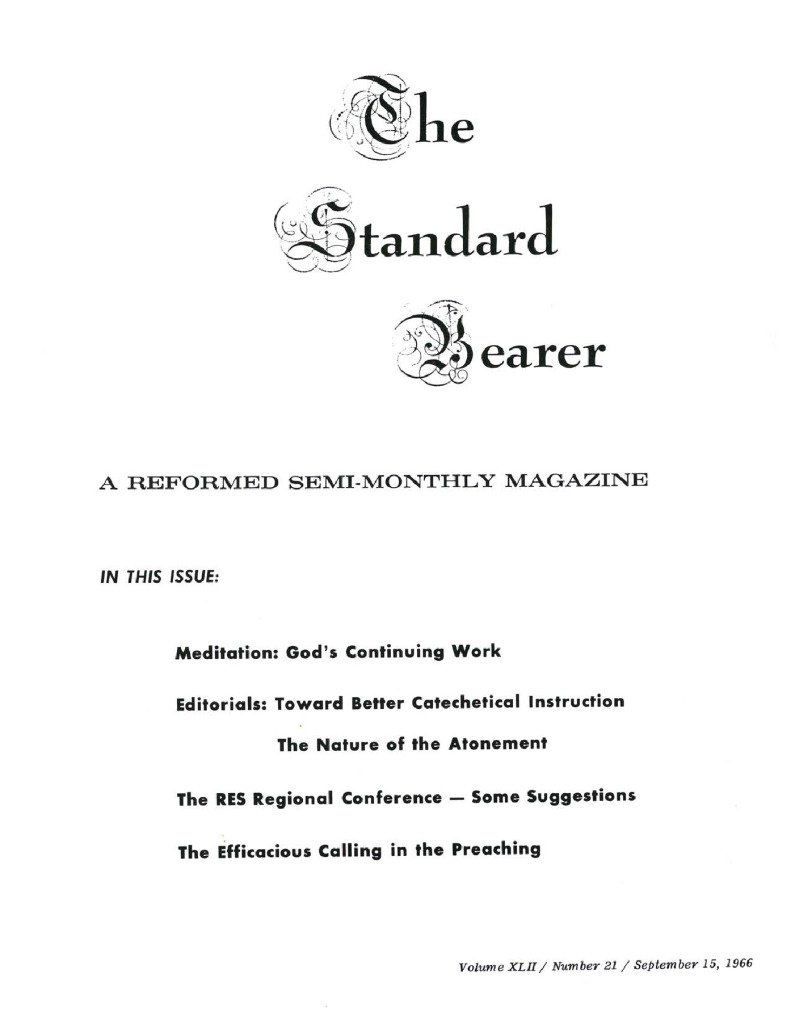