On Sunday, January 9, Rev. R. Kleyn, pastor of the Covenant of Grace PRC in Spokane, WA, began a commitment to speak on the Reformed Witness Hour for several months. During the time that Rev. Kleyn is on the radio, Covenant of Grace will be sponsoring additional broadcasts of the RWH in Spokane on the FM network of ACN at 5 p.m. on Sundays, 106.5, but also broadcast in the Tri-cities, Walla Walla, Wenatchee, Moses Lake, and Yakima. This broadcast began already on January 2, and Rev. Kleyn received a phone call the following Monday from a listener. The RWH is also broadcast locally on Sundays on KQNT 590 at 9 a.m. and KTW 630 at 9:30 a.m.

The Heritage PRC in Sioux Falls, SD, decided to discontinue the Domestic Mission Committee-sponsored broadcast of the Reformed Witness Hour over radio station KWSN 1230 AM at the end of 2010. This decision was made after Heritage, first through the efforts of their missionary pastor, Rev. A. Brummel, and then, after their organization, through the efforts of their pastor, Rev. A. Brummel, tried over a period of three years to build a listening audience. Regrettably, at this time those efforts have not resulted in a listening audience, so Heritage faced the question of whether it was worth their support to continue to fund a local RWH program when one can hear the same program via another station in the area. So for now Heritage will continue to work with the Reformed Witness Committee, which is a joint evangelism committee of the area PR churches, to sponsor the RWH already broadcast in Pipestone MN over KLOH 1050 AM at 8 a.m. on Sunday mornings or KDCR Sioux Center, IA 88.5 FM at 5:00 p.m. Sunday afternoons. However, if in the future Heritage finds that there is local interest, they could possibly once again sponsor the RHW on a radio station in Sioux Falls.

The Evangelism Committee of First PRC in Holland, MI has decided once again to lead a chapel service at the Holland Rescue Mission in 2011. First will lead chapel services the fourth Thursday of every odd month in 2011, starting, D.V., on January 27, then again in March, May, July, September, and November.

The congregation of First PRC in Grand Rapids, MI was asked to join their Evangelism Committee on December 20 as they went caroling to a local neighborhood to introduce First Church and to invite neighbors to worship with them on Christmas Day. All ages were welcomed to join the Evangelism Committee, and they were reminded to come bundled up with hats, gloves, and boots. Hot cocoa and goodies were promised afterwards at church.

The Evangelism Committee of the Randolph, WI PRC continues to be busy in many different areas of outreach. Among items they are currently working on is the organization of their church pamphlets and books. They also continue with efforts to add some of that literature to the libraries of the Fox Lake and Waupun prisons. They are also in the process of setting up an account on sermonaudio.com, a website where people can search for sermons either by the name of the preacher or by topic. Randolph will be posting their sermons on that website, as many of our PR churches currently do.

The congregation of the Berean PRC in Manila, the Philippines decided to take a break from their study of the parables of Jesus to watch, via DVD, the lectures that Prof. D. Engelsma and Prof. H. Hanko gave at the British Reformed Fellowship Conference in Wales last year. The first lecture that they watched, on January 4, featured Prof. Engelsma on the topic, “Reformed Life and World View,” which was followed on January 11 by Prof. Hanko on the topic, “The Organic Development of Sin.” The Berean congregation plans to view all the lectures in the set, DV.

With much thanksgiving to our God, we, the Consistories of the Berean PRC in the Philippines and the First Reformed Church of Bulacan, jointly announce to our respective congregations today, December 26, that we desire to work and will be working together towards the establishment of a federation of PR churches in the future and with the Lord’s blessings.

So begins a letter in the December 26 bulletin of the Berean PRC. The letter goes on to say that the consistory expects this goal to take many, many months of work. There are many details that will take time to work out, including having both congregations getting to know each other, and the guidance of both consistories in the details and obligations of a federation of churches. The consistories covet the prayers of their congregations, and we add here our prayers as well, as they work together towards this important and necessary goal of a federation of self-governing and self-supporting Filipino PR Churches. In this work let us all commit our way unto Jehovah (Ps. 37:5).

The young people of the Hope PRC in Redlands, CA hosted a Christmas singspiration on Sunday, December 26, after their evening worship service. The singspiration was a fundraiser for this year’s Young People’s Convention. The young people of the Calvary PRC in Hull, IA were invited to a fun night of pizza, bowling, foosball, and games at the Dordt Sub on Monday evening, January 3.

Rev. C. Spronk declined the call he received to serve as the next pastor of the Edgerton, MN PRC.

The congregation of the Hope PRC in Walker, MI extended a call to Rev. C. Spronk to serve as their next pastor.

On Sunday, January 2, the Wingham, Ontario PRC voted to extend a call to Rev. Marcus to serve as their next pastor. 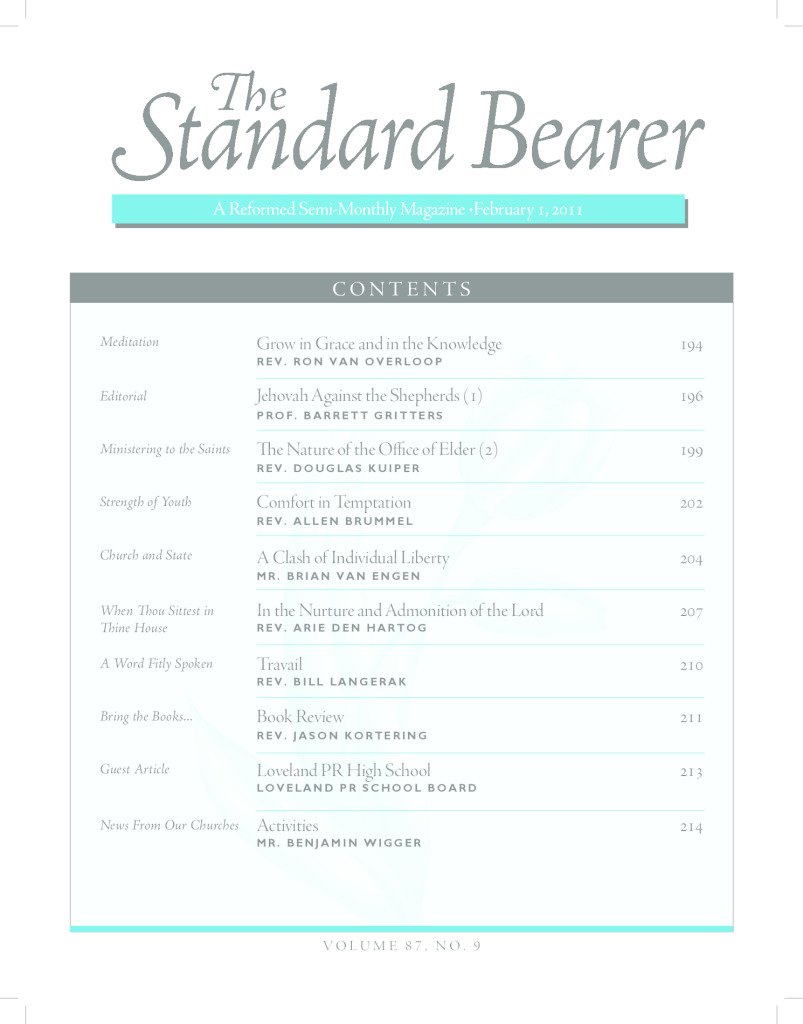