Southwest Church, by the way, has recently organized a Choral Society which will present its first program on Sunday evening, January 3, at 9:00 in the church auditorium. Perhaps their former pastor will be in attendance, for we read that Rev. Lubbers expects “to be home here for a brief visit beginning on Dec. 21.”

From our school in Edgerton, Minnesota, we have some news of interest, gleaned from the “Northern Lights,” seasonal news bulletin of the Free Christian School. The school, incidentally, is currently under the administration of Mr. Tom DeVries, formerly of Grand Rapids. According to Mr. DeVries, Edgerton was the site, on Nov. 6 & 7, of what might be called a regional Protestant Reformed Teachers’ Institute Convention. The Convention was attended by “the six teachers from our three western schools, Misses Beverly Hoekstra and Barbara Zandstra from Loveland, Mr. John Kalsbeek and Mrs. Walter Fair from Doon, and Mr. and Mrs. Tom DeVries.” Several ministers were also, at least part of the time, in attendance—Rev. C. Hanko, Rev. Kortering, and Rev. Lanting spent some time there.

At the first session of the convention, the western teachers shared, by means of tape recordings, part of the program of the convention of the eastern teachers. The forum of The Christian and Ecology, presented at Hope School by Mr. John Buiter, Mr. Tom Newhof, and Prof. H. Hanko, was taped at the request of the western teachers. This tape, then, was the basis for discussion in the first meeting at Edgerton. In another of the meetings, “Mr. Kalsbeek gave a talk on individualized reading.” Mr. DeVries writes that “the rest of the time was spent in discussing other areas of Christian instruction.” And, further, “We are thankful to God for the opportunity of meeting as Protestant Reformed teachers, and felt it was profitable to all. We hope that this may become an annual event.”

Further along in the same newsletter, we find that plans are being made for a chapel exercise in Edgerton, with the students of our school in Doon also attending, and with Rev. Engelsma, pastor at Loveland, as guest speaker. One could probably be excused for calling that togetherness.

Then there’s the speech by Rev. Heys, given at the fall meeting of the Mr. and Mrs. League. His topic was “Training Our Youth in Covenant Distinctiveness.” He began by reminding those in his audience that they were in the most important period of their married life—the time in which they must teach and train their children in covenant faithfulness. He mentioned that, because of the fact that we are living in days of rapid development of sin, the task is harder for them than it was for their parents, and would, no doubt, be still more difficult for their children. The task is difficult, he stated, because, by virtue of the fact that corrupt stock brings forth a corrupt offspring, the simple fact is that every child born into this world is born an unbeliever. They, therefore, lust for the things of the world. Our children are, by nature, no different than children of the world. But, thanks be to God, we can say more than that. Besides being children of our sinful flesh, they are also born of the Spirit of God. There is, therefore, in them the desire to ask, “Lord, what wilt thou have me to do?” and at the same time an attitude characterized by, “Who is the Lord, that I should obey His voice?” But it is precisely because they have the new life, that theycan be trained.

Very important, in this training, Rev. Heys mentioned, is instruction by example. Children must not only betold what to do, but shown how to do it. Mothers, for example, who wear short minis, cannot expect their children to get as far away as possible from that sin. “Sin in which the parents walk, their children run.”

We’ve probably already passed our space limit so we’ll just add his concluding remarks. In spite of the disappointments and failures on our part, as parents, we count it a blessed privilege that God is using us as his chisel, with which He forms this people to Himself.

Did you know that our church in Redlands was broken into on Thanksgiving Day and relieved of about $600?

Note to editor-in-chief—Why don’t you delete a paragraph from somebody else’s column this time, so that all of mine can fit in? 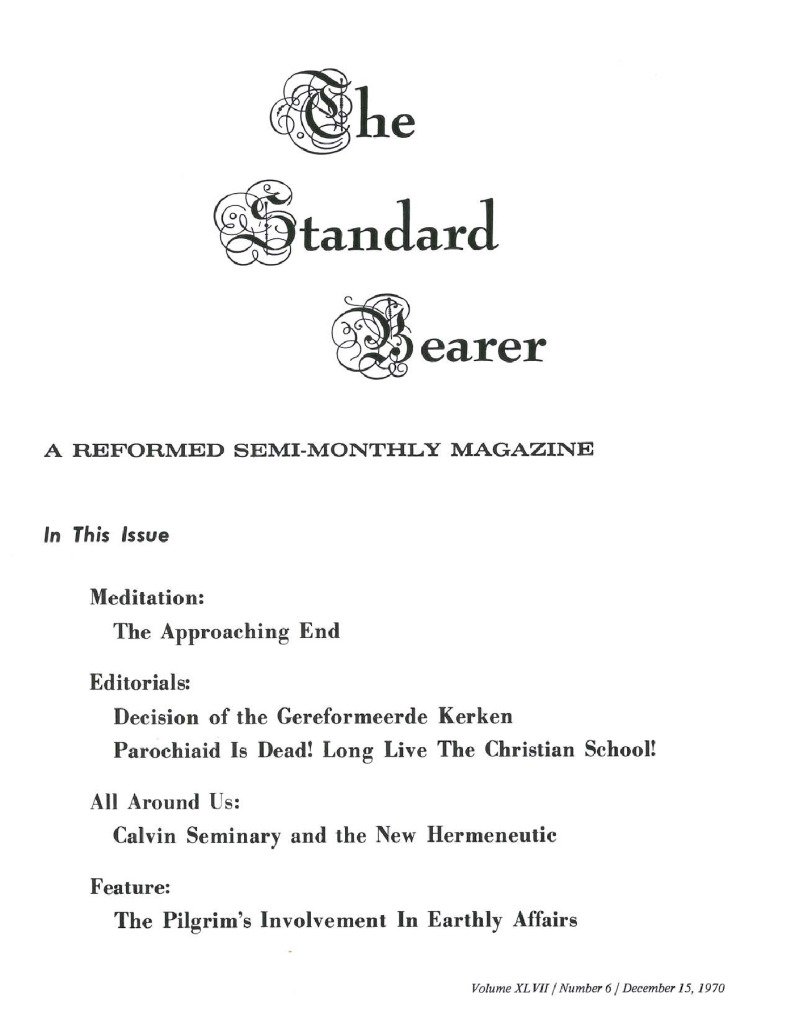