The diaconate of Hope Church in Grand Rapids was happy to announce that the recent Jamaican Clothing Drive was very successful. On November 10, no less than 3000 lbs. of clothing was sent to Jamaica.

On the evening of November 13, Hope Church of Isabel, South Dakota, held a dedication program in gratitude for their new church building. According to that church’s bulletin, “Rev. C. Hanko will speak for this occasion.” And, further, “May God grant that we may dedicate ourselves to the upholding of God’s Truth in this building as we have in the old.”

We notice also that Isabel’s pastor, Rev. Moore, has recently begun a weekly “study class,” to which all the members of the congregation are invited. Their present topic for discussion is “the doctrine of last things.”

From various sources we learn that some ministers in the Grand Rapids area have recently entertained a rather interesting guest in the person of Rev. Stanley Baxter from the country of England. According to a South Holland bulletin, he is pastor of the St. Paul’s Free Church of England. According to Rev. Harbach’s Kalamazoo bulletin, that church is the “sister church of the Reformed Episcopal Church” in America. It seems that he came to America particularly to make contact with the Reformed Episcopal Church in Philadelphia. But several years ago he had begun correspondence with several of our ministers—first with Rev. VanBaren and shortly after with Prof. Hoeksema. He decided, therefore, to spend a few days in Grand Rapids, Two of those he spent at the home of Rev. VanBaren, and two at the home of Prof. Hoeksema.

According to Grand Rapids church bulletins, on Dec. 3 he met with some of our ministers, who found him to be a very knowledgeable person, and one who is “deeply interested in not only Calvinism, but the Reformed truth.” He met for a time also with our Seminary, and after rather lengthy discourse, the conclusion drawn was that there seemed to be virtually no area of real disagreement.

Rev. Baxter also spoke at the after-recess program of the Junior Mr. and Mrs. Society of First Church. He painted a rather dismal picture of the ecclesiastical situation in England. He spoke of theological colleges which are openly liberal, and of churches, therefore, either going the same way or gone. He mentioned that his particular church is a member of a denomination consisting of 42 small churches. And he noted, also, that in his church there are no families—onlyindividuals who have been attracted to his church either from a modernistic church or from no church background at all. He said that he has to “preach the idea of the covenant, by faith,” since his congregation does not know it from experience.

We’re spending, in this news column, quite a bit of time with Rev. Baxter. That’s partly because there’s not a whole lot of news, anyway, and partly because we find it very interesting to learn that we are establishing contact with brethren, in a different land, who are interested in us because they feel themselves to be, for good reason, it seems, one with us.

Since there’s a little space left yet, we’ll deal with one more of Rev. Baxter’s visits—this one to the student body of Adams Street School. By the very nature of this case, this will be in a lighter vein; but then you’ll get the whole picture. We’ll quote from a news sheet from Adams (we trust that the author will not object).

“A special assembly was held at 12:30 last Wednesday to give the 6th through 9th graders an opportunity to hear him. And what a treat it turned out to be! He spoke for 1/2 hour, during which time he, among other things, gave his impressions of America, as compared to England. He noted a difference in ‘spice’:—which meant very little to the audience until they discovered that the sounded vowel in ‘spice’ rhymes with that in ‘todiy’ and ‘Michigan stite.’ By the time he mentioned that the English pliy cricket, which is their national gime, the students were so accustomed to his British English that they didn’t bit an eyelish. After speaking for about 30 minutes, he offered to answer any questions the students might have. Questions were a little slow in coming at first, but once the audience got wound up, there was no stopping them. The speaker was asked concerning the length of skirts in England. The reply—’I can tell you what it was like 2 weeks ago when I left, but I can’t guarantee what it’ll be when I get back.’ He was asked how the English celebrated Christmas. The answer—’In the usual pagan way, just as in America.’ The students enjoyed every minute of it, and when, 50 minutes later, the proceedings finally had to be called to a halt, hands yet waved. We’re sure that the tremendous and spontaneous applause at the close of the meeting was all the thanks needed by Rev. Baxter.” 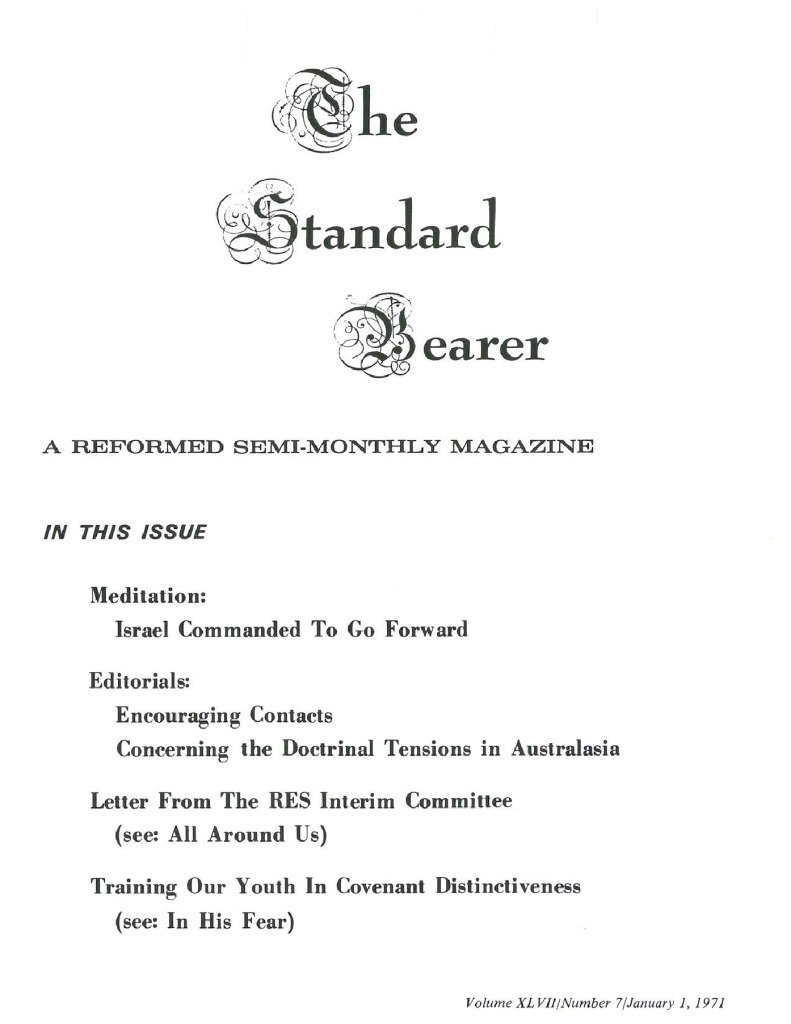