Rev. D. Engelsma, pastor of the Loveland congregation has declined the call from Doon, Iowa; and shortly thereafter he received another call—this time from our church in Randolph, Wisconsin.

The congregations of Hudsonville and Holland, Michigan, have decided to jointly assume the financial support of the Reformed Witness Hour broadcasts over WJBL on both Sunday and Tuesday. Since that time we’ve been treated to some news “From Our Radio Listeners” in Hudsonville’s Sunday bulletins. Here’s one from New York: “Dear Sirs, I heard the Reformed Witness Hour on KLTR about 14-15 years ago. I have almost every sermon except for ’67-’68 in notebooks. Then you went off the air, but I kept getting the sermons. We moved two years ago—and while I cannot hear you, I can keep the sermons, which are better because you can always go back and review. It was because of your sermons that I. came to value and understand my salvation and could understand the fine line of know and know about; and realize how little we men have to do with salvation—or even wanting it. Knowing how much depends on God, and how little depends on me, is a great source for peace of mind. I know how strong He is and how weak I am.”

A couple of our churches have undergone, or will soon undergo, some remodeling and repair. The congregation at Hull has decided to completely rebuild the pulpit area of the auditorium. And our Holland church no longer has the problem of “nylon-snagging”—”all the seats have been reupholstered along the leading edge.”

The Mr. and Mrs. Society of Hudsonville had what must have been an interesting after-recess program a few weeks ago. Two Grand Rapids police officers were asked to speak to them concerning what it means to be a Christian police officer.

Weather was a factor in Michigan news during the month of January. There were, in fact, two blizzards in one week—the second of which made it necessary for Rev. Veldman to cancel his Saturday catechism classes in Hudsonville.

If you happen to be in or near Grand Rapids on the 15th of April, you might be interested in knowing that there’s a public lecture, by Rev. G. VanBaren, scheduled for that evening in First Church.

Rev. VanBaren, as secretary of the Mission Committee, has received several letters of thanks from the Protestant Reformed Churches of Jamaica. He has made a couple of these available for the Standard Bearer news column. We’ll quote a little from two of them. “We, the brethren of the Protestant Reformed Church of Jamaica by the hand of Rev. George C. Lubbers, through our covenant God which provides for us, the poor in Jamaica. May we give thanks to all the brethren in U.S.A., and more than all for the three forms of unity. Likewise we thank God for our teacher, Rev. G.C. Lubbers.”

The other letter read, in part: “We are grateful to the Mission Committee for the help which has been granted to us for the building project.” Those were from Elder T. Wright of Belmont and Elder A. Wright of Reading, respectively. Though our quotations were not word for word, we trust that we’ve done justice to the intent of the authors.

The Mission Committee also received an informational letter from Rev. Lubbers, a summary of which has appeared in some church bulletins. He writes that he and his wife are doing well, though he, himself, is still troubled with a persistent cough.

Rev. Lubbers spends two days each week giving instruction at Lacovia to four young men who are preparing for the ministry. His instruction ranges from a course in Old Testament history (for which he makes occasional use of tapes made by Rev. Heys) to a course in English composition and grammar (for which he makes use of a few textbooks on loan from our school in South Holland). Rev. Lubbers noted that one of his copies of the English texts was a Teacher’s Edition; and he added, parenthetically, “I now know why my teachers knew all the answers in English!”

Our missionary also recounted the “considerable work and frustration” involved in gaining possession of the clothing from the last clothing drive made in the states. Now that he has it, he writes that his wife “unpacks it, sorts it, arranges it tidily in boxes, and we deliver it to the various churches, attempting to make the delivery coincide with preaching, and the routes taken for school, etc.” He testifies to the very real gratitude of the Jamaican brethren.

Rev. D. Kuiper and Mr. C. Vander Molen from Pella, Iowa, have recently visited the island, during which visit Rev. Kuiper preached the Word in both Shrewbury and Ft. Williams.

Rev. Lubbers concludes by requesting, “Remember us in your prayers before the Throne of God that boldness may be given us to preach the Word in the opening of our mouth as we ought.” 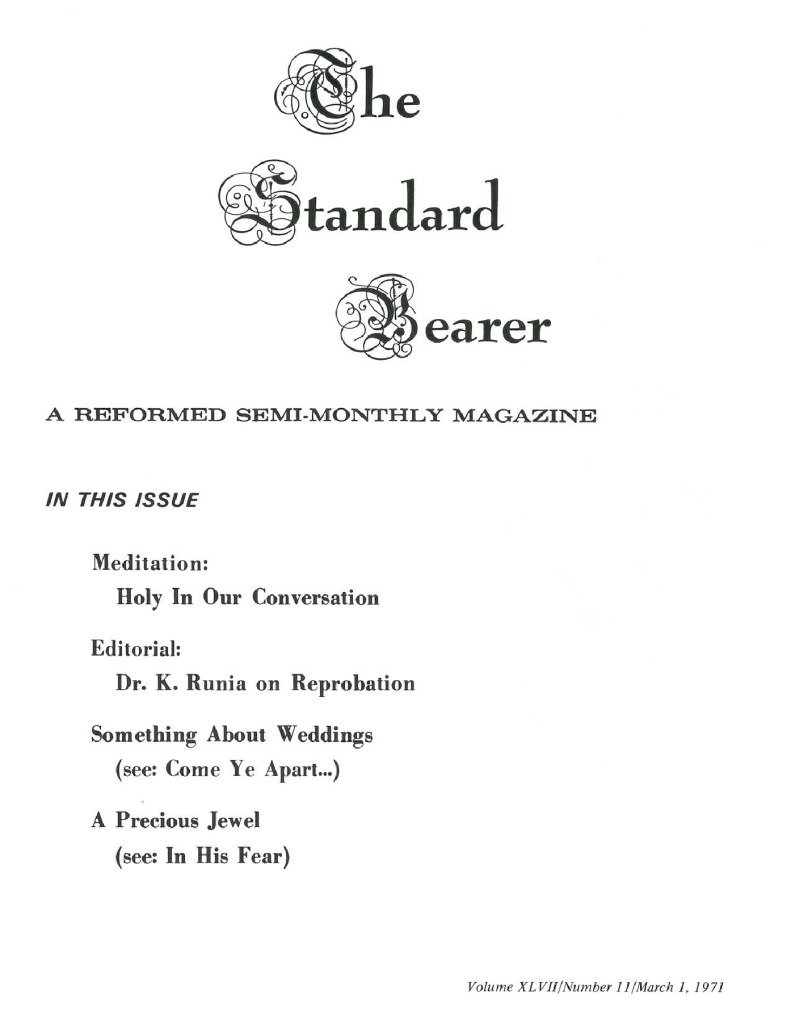