Rev. Woudenberg declined the call from our Kalamazoo Church. Rev. Lubbers, who accepted the call from Pella, was to be installed in the ministry there on Friday, January 3.

Rev. Heys, who has not been feeling at all well lately, submitted to surgery for the removal of his gall bladder, during the week of December 16. According to Southwest’s bulletin, the prognosis was for “complete recovery, D.V.”

In the stack of bulletins I’ve received during the past two weeks, there are, understandably, numerous references to Christmas programs of various kinds. There was, for example, a Christmas Mass Meeting, for the young people of the Grand Rapids’ area, held in Southeast Church on Sunday afternoon, December 22. Rev. Van Overloop was the speaker. That evening there was a Christmas Hymnsing in First Church. According to Southeast’s bulletin, an interesting program was planned for the occasion. “Selected passages will introduce the songs shared by the audience, and the Radio Choir. A brass quartette will also contribute music to celebrate the advent of our Lord.” That was after the evening church service. A “Special Invitation” was extended to the congregation of First Church, via the bulletin, to come to church early and enjoy a “very pleasant surprise” before the evening service. And a pleasant surprise it surely was, for, from the rear balcony of the auditorium came the strains of beautiful music, as members of the Radio Choir sang various Christmas carols, a capella, under the direction of Mr. Roland Petersen.

Sunday School Christmas Programs were also presented in most of our churches. The one in Hull, however, was the only one I noticed that was held on Christmas Eve.

One final Christmas Program yet—this one held in Loveland on the 15th of December. It featured the Loveland Protestant Reformed Choral Society. In addition to numbers by the Choir, the program included also a tenor solo, and a men’s quartet, as well as some singing of carols by the audience. At the top of the printed program, incidentally, was a pair of names which has long been familiar to those who have attended musical programs in our churches in Grand Rapids. The Loveland Choral Society performs under the direction of Mr. Gerald Kuiper (now the teaching principal in our Loveland School) and is accompanied by Mrs. Kuiper.

The December 29 bulletin of Southwest included a paragraph which looked at 1974 in retrospect. In it were presented statistics through which, the writer said, “we can see the Hand of our Faithful Father in Heaven in His many blessings to our congregation.” Among the statistics from this relatively small congregation, were the following: eighteen confessions of faith, the addition of twelve young people and five families through transfers, five marriages, and seven baptisms. The Lord’s blessing on a particular congregation is not Tao be measured in terms of numerical growth, of course, but we rightly rejoice when our Covenant God sees fit to give us that, too.

The Council of Southeast Church has inaugurated several changes in that congregation’s order of worship. They include silent prayer in unison at the beginning of the service, Scripture Reading immediately before the Sermon, and the, congregation’s audible recitation of the Apostles’ Creed in unison with the presiding minister.

Mr. Vander Wal has again slipped me a couple of samples of many interesting pieces of correspondence he continues to receive. One came from a reader in Johannesburg, South Africa. In payment for the Standard Bearer subscription, he made out a check payable to Mr. Vander Wal personally. In the accompanying letter, he offered this explanation: “I have done this to facilitate matters, as I can send money out to individuals without any questions asked, but to send out money to church organizations takes over three months to get permission granted, etc. The government has put these strictures on money sent to church organizations because of the World Council of Churches’ support of terrorists.”

The writer concludes with the gratifying statement that he continues “to appreciate the excellent material found in the Standard Bearer, and to follow with keen interest the news of the Protestant Reformed Churches. May the Lord continue to bless the work and witness in your churches and missionary labors.”

Perhaps there’s room to squeeze in one more. From Oregon, this: “I have purchased locally, and have been reading Herman Hoeksema’s Reformed Dogmatics, and his exposition of the book of Revelation, Behold He Cometh. I find them to be a refreshing and delightful—if that term is not too undignifying—exposition of Reformed faith and thought. I would appreciate any information which is available concerning other publications you may have, or design to have for sale.”

Needless to say, we are thankful for such evidence that God uses our witness, not only as it extends to the far reaches of the country, but also of the globe. 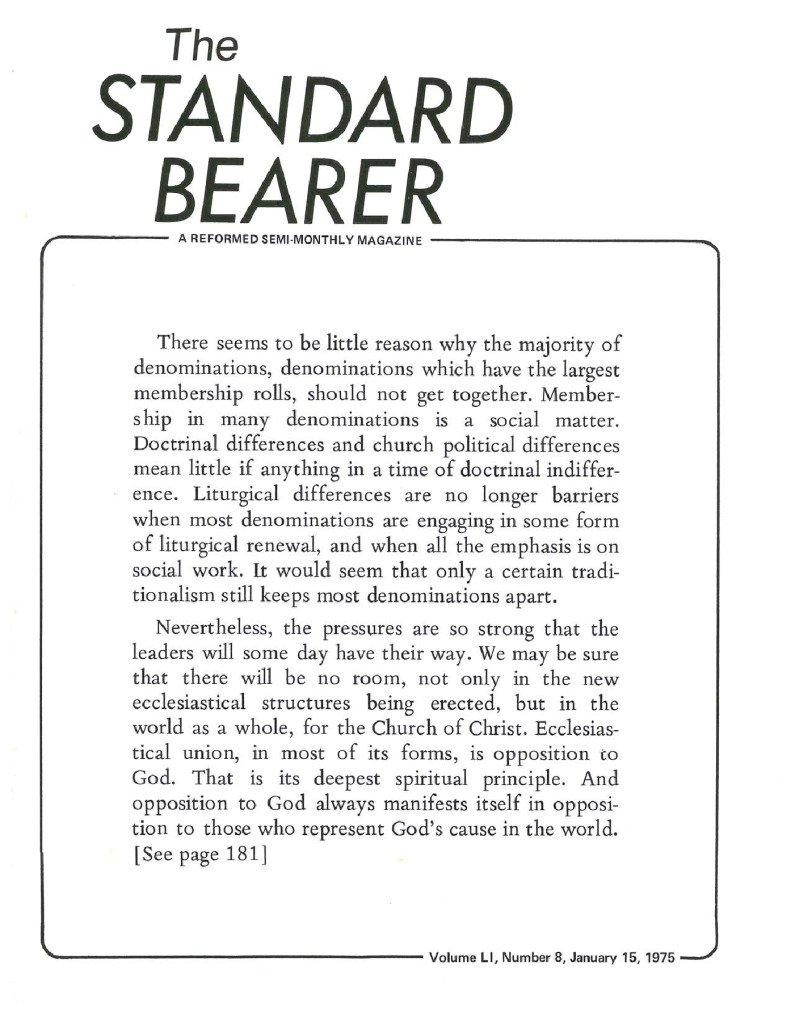