As we mentioned before, Rev. Veldman has accepted the call from Southwest. He preached his farewell sermon at Hudsonville on Sunday, April 25. The congregation held a Farewell Program for him the following Tuesday. The congregation of Southwest, meanwhile, was preparing for the arrival of Rev. Veldman as their pastor. Some work was done in the parsonage, the ladies doing the cleaning, and the men some repairing and remodeling.

According to the bulletin of Southwest, Rev. M. Schipper officiated at the installation of Rev. Veldman on Sunday, May 2. The consistory, in that same bulletin, thanked Classis East and the Seminary for providing pulpit-supply during the time in which Southwest was without a pastor.

With the vacancy at Hope and Hudsonville, the Seminary students certainly have plenty of opportunity for “practice” preaching in our denomination. We notice that, on March 28, at Holland, Seminarian Mark Hoeksema joined the ranks of those students engaged in such practice. That brings to six the number of seminary students who have appeared on one or another of our pulpits. There are at present seven students, one of which (Mr. Rod Miersma) will graduate this June. There are, also, two young men attending the Dogmatics class, both of whom might soon be fulltime students in our seminary. The class which they attend is one which is attended by all seven full-time students as well. The room is equipped to accommodate eight comfortably. A folding chair must be brought in for the ninth one. Can you imagine that? Our seminary is outgrowing its classrooms!

There is, in our churches, another area in which the blessing of God is manifest in an increased number of laborers. We have in mind the area of instruction of covenant seed in our Protestant Reformed day-schools. We learn from Loveland’s bulletin that Miss Hoekstra and Miss Zandstra intend to return, for the 1971-1972 school season, to our school in that city. We understand that Mr. Tom DeVries and his wife will again be in Edgerton. As far as we know, Doon is all set, and so are Adams, Covenant, Hope, and South Holland. In the history of our schools it has never been a simple task for all the Boards to acquire a complete staff of teachers—and this year it’s been done before the end of April. That, by itself, is a pretty good indication that the teacher-supply situation is improving. But, if our information is correct, it’s also true that there are more than a dozen of our young people, presently attending college who intend to enter the teaching profession. For our schools this is very welcome news.

We should mention something, yet, about recent lectures. One of them was entitled “Holy Scripture Wholly Divine,” and given by Prof. H. C. Hoeksema in South Holland, on April 19. The other, which you’ve seen advertised in the Standard Bearer, was by Rev. G. Van Baren in Grand Rapids, on April 22. The rather unusual topic, “Ted and Alice and Groppi . . . and Grace,” might have had something to do with the size of the audience. Certainly it is true also, of course, as the speaker mentioned, that the size of the audience was an evidence of the deep concern about the departure from the truth which we see in the Reformed community. First Church was nearly filled. If you missed the lecture, we understand that it will appear in the Standard Bearer, and that tapes of the lecture will be available, on request, from Mr. H. Vander Wal, whose address can be found on the first page of this magazine.

In addition to lectures, there were also plenty of end-of-society-season speeches in the last several weeks. Rev. H. Veldman, for example, spoke in Southwest at the league-meeting of Mr. and Mrs. Societies. His topic was, “The Christian’s Calling of Love.” In speaking of the manifestation of that love in the communion of saints, he mentioned such things as the content of the discussion in visits with friends. But he laid the stress, in his speech, on another aspect of that love, namely, preparation for society meetings. Our societies can be very useful as a means of mutual edification through discussion of a passage of God’s Word. This can be done well, however, only in the way of prior study. A lack of preparation makes it impossible for an individual member to benefit as he should from his society attendance. However, by a lack of preparation a person is also saying something about his attitude toward the communion of saints as it is evidenced in the united study and mutual edification made possible in our societies. That message of Rev. Veldman could well be repeated at the beginning of next season. 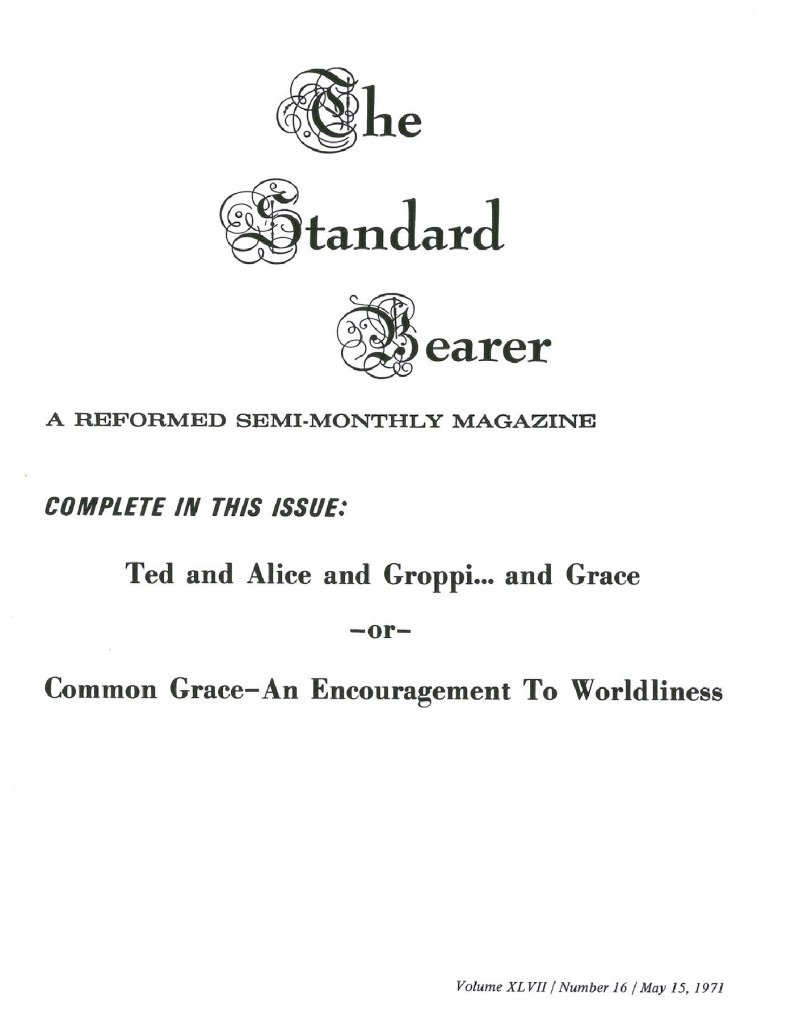