Because of the Classes Reports in the last two issues of the Standard Bearer, a considerable amount of news for this column has been accumulating—so much so, in fact, that I hardly know where to begin. The flurry of news concerning current mission efforts of our churches is certainly of special interest at this time, so perhaps I should begin with that, and see what space yet remains for other items.

From a February bulletin from Isabel we read of that congregation’s efforts to “spread the light of the gospel in yet another way than by the regular preaching on Sunday.” According to the announcement, “plans are now underway to air over the local radio station, KOLY, thirteen 15-minute sermons provided by the Mission Committee and the Loveland consistory. The Lord willing, this will begin as soon as a time slot is made available that is favorable to both the station and us.”

A news bulletin distributed to members of Southeast’s congregation, tells of further use of the an-ways. Part of it reads as follows: “Our Radio sub-committee, in conjunction with the Reformed Witness Hour Committee, has made a contract for one year to broadcast our Reformed Witness Hour program over WXUR—Media, Pennsylvania. This station is located on the outskirts of Philadelphia—has AM & FM frequencies—and covers a highly populated area where there are over a million potential listeners. The cost of this station is $54.00 per half hour, and broadcast time: 3:00 – 3:30 P.M. Sunday afternoon. The Mission fund of our churches will bear half of this expense, and Southeast Church the other half.

“We are informed that there is some good response already, and this broadcast will greatly assist the man we will have working in this area. As you must already know, Rev. Engelsma spent several weeks in Philadelphia. Rev. VanBaren is there now as follow-up, and Rev. Kortering will be going there for the summer months we are told.”

This same Southeast newsletter made mention of the fact that, while Rev. Engelsma was working in Philadelphia, “he also made substantial contacts with people in New Jersey.” As a consequence of those contacts, a group of people there has requested that our Mission Committee send a man to engage in further work among them. Rev. Decker, subsequently, was released by his consistory to spend the four Sundays of May in that area.

In further developments, which seem to be occurring with such rapidity that it’s difficult to keep up with them, a request from Maine has led to a decision that Rev. Schipper spend some time with a group of people in that state.

From Grand Rapids’ Hope Church’s bulletin we learn that a congregational meeting was scheduled for May 4 to call a home missionary, to labor specifically “in the Philadelphia area of the eastern United States.”

A couple of other bulletin announcements could be quoted, yet, to give a better understanding of what is really happening in the different areas in which our churches have been laboring. From that of First Church we quote the following: “A report, via phone to the clerk, from our pastor informs us that he conducts worship services twice each Sunday, with a catechism class on Sunday mornings. He also held a Good Friday service as he would have had at home. He meets with a group each Thursday evening, discussing the Neth. Conf. and intends now to discuss with them the Antithesis in the area of Christian Living—a real issue with them as they understand Christian liberty versus the things of the world . . . Most of his evening time is spent visiting various families, discussing our doctrines as they are embodied in our Confessions and as they relate to our walk in sanctification. Rev. VanBaren expects to be back home May 8, and we gather that he will be eager to take up his labor of love in our midst again. He appreciates our prayers in his behalf as he works in Philadelphia . . .”

Rev. Veldman has long since completed his six-week stay in Florida, but it should not be inappropriate to add a few lines about that work, taken from Southwest’s bulletin of March 18. It included excerpts from a letter the consistory had received from Rev. and Mrs. Veldman. Here they are: “. . . The Sundays of Feb. 25 and March 5 were spent by preaching in a Holiday Inn to some twenty-seven persons, ten of which were not members of our denomination. Beginning March 11, services will be held in the chapel of a funeral home . . . Several contacts have been made and much literature has been distributed . . . A man from Winter Haven has requested us to preach there to about 60 souls, some of whom live there permanently. We are both well and enjoying this work very much. It is so wonderful to witness of our truth to others.”

That last line of Rev. Veldman’s is a good one with which to close our news for this issue. These contacts and apparently “open doors” are exciting and, of course, heart-warming. Information concerning them, therefore, is likely to appear elsewhere in this issue. I hope that what’s on this page is not too repetitive to be of interest. 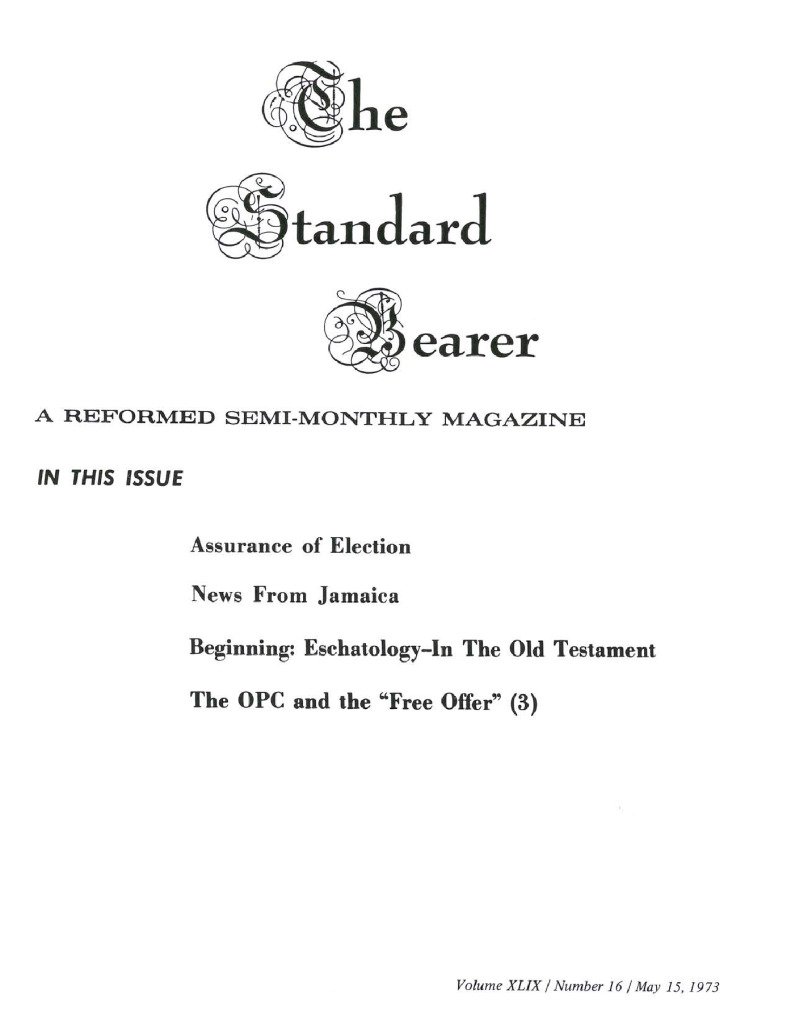