The month of June has brought graduation for many of our young people. It might be appropriate, therefore, to include a “note to our graduates” which appeared in a bulletin of Hull Protestant Reformed Church in May of 1971. It comes, very likely, from the pen of Rev. Kortering.

“Graduation is a highlight in your life. Whether you receive your 8th (or 9th) grade diploma or high school diploma, it means years of hard work and represents a real achievement. “Graduation is a moment of reflection. What have you learned? The diploma doesn’t tell you the answer. Your academic standing in your class doesn’t reveal it. Rather your life will indicate whether your education has achieved its purpose that, ‘the man of God may be perfect, throughly furnished unto all good works’ II Tim. 3:17.

“Graduation is a time of aspiration. You have mixed feelings about the future, either you leave a school for another, or you have completed your formal education. The future is uncertain for all of us. Yet the faith you have is not in yourself, not in your neighbors, but in your God. This gives you the stamina to implement your instruction in all areas of your life that God may be glorified through you. Continue to learn that, ‘They that wait upon the Lord shall renew their strength, they shall mount up with wings as eagles’ Isa. 40:31.”

In addition to our grade school and high school commencement exercises, there was the June 13th graduation ceremonies of three of our seminary students—Candidates Bekkering, Kamps, and VanOverloop. Rev. H, Veldman, in his introductory remarks at that program, called attention to the fact that we were witnessing a “mass graduating exercise.” It’s been a long time, he reminded us, since we’ve had a graduating class of more than one. But, he added, significantly, even more important than the quantity is the fact that we have quality. Both of those factors, it would seem, made of those ceremonies ‘
Notices concerning the Young People’s Convention have appeared, it seems, in all of our churches’ bulletins. There’s no doubt that this is an important event for our young people, especially for those of the Loveland Society which will host the convention. In fact, the convention looks to be of considerable import ante to the entire Loveland congregation. According to a newsletter prepared by the Young People’s Society for that congregation, an estimated 250-300 young people will converge on the community on July 24. “We need lodging,” the newsletter continued, “for about 250 young people in the homes of the congregation on Monday evening.” According to the calculation of the committee, that “will average out to about 8 or 10 young people in each home.” After the suggestion that “bunks in garages” will suffice, there was that nice little abbreviation, “etc.” What that includes is anybody’s guess, I suppose, but if my memory of the 1961 Loveland convention serves me correctly, barns and back yards are definitely not to be excluded.

To reminisce a little further, Loveland’s present pastor tented in one of those back yards, at that convention eleven years ago; and, further, on Sunday of the convention week, he occupied Loveland’s pulpit—though, at that time, as Seminarian Engelsma.

As you know, Rev. Engelsma spoke at the program commemorating the 25th anniversary of Hope Protestant Reformed Christian School. When he was in Grand Rapids, for that occasion, we learn, he was also asked to deliver a lecture on “Modernism and Neo-Orthodoxy” for the modern church history class at Covenant Christian High School. A similar visit was that of Prof. Hanko to a 9th grade class at Adams School, where he spoke about extra-sensory perception and about tongue-speaking.

Last, but hardly least, is a message from our ever-enthusiastic business manager, Mr. Vander Wal.

“In the June issue of our STANDARD BEARER you included in your column a report concerning the geographical coverage our paper has been receiving of late. Your news item ended with the hope that we might receive a subscriber residing in the State of Alaska. Well, thanks to your column, we ‘got one!’>

“A subscriber to our magazine submitted and paid for a ’10 for 2′ Introductory Offer for a 6 months’ subscription for The Anchorage Public Library, Anchorage, Alaska. How about that!? Now it’s Maine to California, Alaska to Florida. Any reader wish to submit the name of a prospective reader residing in the State of Hawaii? 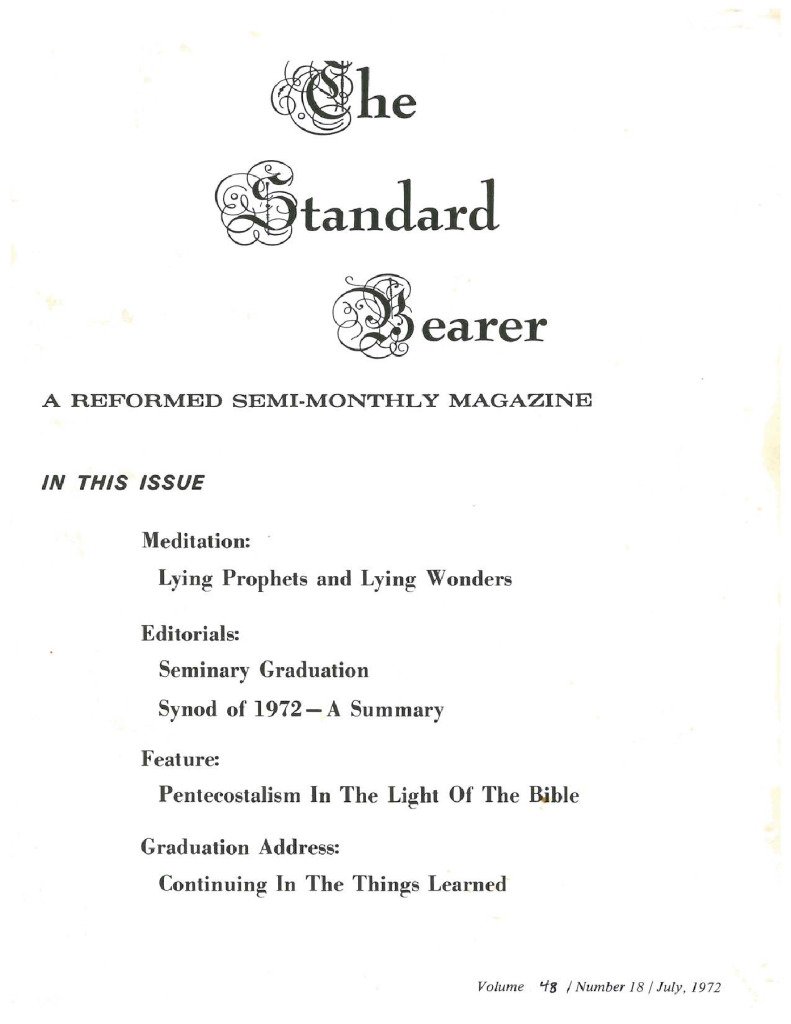