Classis East met in regular session on June 27th, 1973 in the First Prot. Ref. Church. All the churches were represented by two delegates. Rev. G. Lubbers, on furlough from his work in Jamaica, who also present and was given advisory vote.

Rev. G. VanBaren led the classis in opening devotions and Rev. R. VanOverloop was given the privilege of chairing Classis East for the first time.

Most of the business of classis was considered “routine” but there were two notable exceptions. The first was a report of a study committee appointed in the January 1973 Classis. After considerable discussion of this report and the attendant church political questions, the classis decided to refer this report to the consistories for study and response by the January 1974 Classis. The other non-routine business was an overture from the consistory of Hope requesting classis to declare itself on the propriety of membership in the Consolidated Independent Union, Local 951 (commonly known as the Meijer Union). Classis, however, declared this overture to be out of order since it violated Article 30 of the Church Order.

There was an interesting sidelight to this session of classis. Elder John VanBaren was appointed to thank the ladies for their catering services; but in trying to fulfill his mandate he could find no ladies, for it so happened that classis had the distinct privilege of being catered to by a waiter, Mr. Art Bult. Mr. Bult very capably handled his duties and did indeed merit the thanks of the classis.

The questions of Article 41 of the Church Order were asked and satisfactorily answered, the chairman in his closing remarks asked God’s blessing upon the decisions taken in this session, and Rev. Lubbers offered a prayer of thanksgiving to close this session of classis. Classis East stands adjourned until the 3rd of October when the next regular session will be convened in Hudsonville.

Good news from Rev. Bekkering, pastor of our Randolph congregation: “We are finished with the foundation and basement and are beginning with the superstructure.” He was referring, of course, to the construction of Randolph’s new church building. This summer will no doubt be a memorable one for that congregation.

And we have a little radio news this month. A member of the Radio Committee of our Reformed Witness Hour has submitted the following:

“The Lord willing, Rev. R. Decker, pastor of our South Holland Prot. Ref. Church, will occupy our ‘radio pulpit’ for a while. His series of radio sermons, entitled ‘JESUS, REJECTED BY HIS OWN IN NAZARETH,’ begin on Sunday, August 12. The first three have already been taped—and what powerful and inspiring messages they are! One Sunday, August 19, his topic will be, ‘WILL YOU ALSO GO AWAY FROM JESUS?’ (Don’t miss this one!) Then on August 26th, Rev. Decker’s theme is, ‘GOD’S PEOPLE DESTROYED FOR LACK OF KNOWLEDGE.’

“We remind our readers that printed copies of these messages are available (free of charge), and also that the sermons can be obtained on taped recordings at a small charge. Address your requests to—THE REFORMED WITNESS HOUR, P.O. BOX 1230, GRAND RAPIDS, MI 49501.” 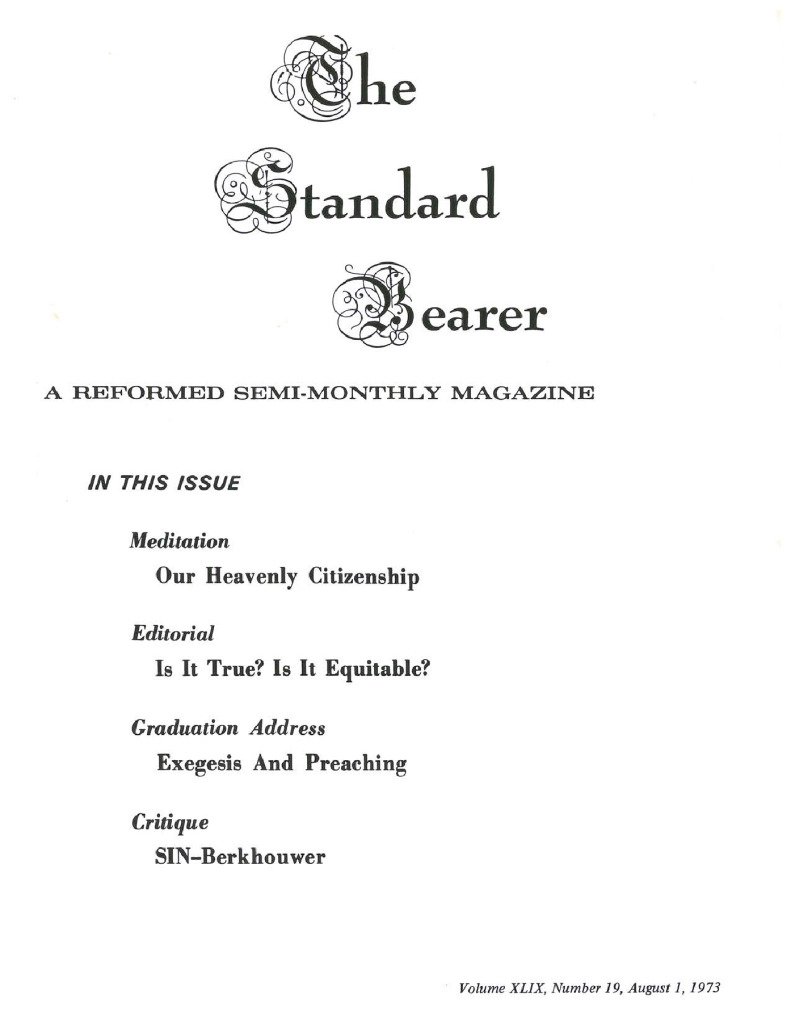