News which has, apparently, appeared in all of our church bulletins is that the Mission Committee, in a joint session with the Consistory of First Church, “decided to suspend labors of Rev. Lubbers in Jamaica in December until the 1974 Synod meets.” The bulletins noted that “Rev. Lubbers feels that his work there is finished and therefore his presence is no longer required.” One bulletin gave the added information that Rev. Lubbers plans to arrive in the states on December 11. Another noted that the Mission Committee intends to “send two emissaries to the island in the Spring to evaluate the field. . . . The emissaries will report their findings to the Committee and then they can come to Synod with a proposal concerning future labors in Jamaica.”

Rev. Moore, we understand, intended to preach two Thanksgiving Day sermons — the first in Doon at 8:45, and the second in Hull at 10:15. This sort of sister-church cooperation came about on account of the absence of Hull’s pastor, Rev. Kortering, who was busy in what appears to be the most promising of the labors being conducted by our churches in various parts of the country. We refer to that in Houston, Texas. Reports are that as many as eighty individuals have attended the morning services. And, according to a Hudsonville bulletin, “fourteen families have requested further labors there.” According to another account, “each one who has been there has given a very favorable report.” Those who have been there include, first of all, Rev. Lubbers who, you perhaps recall, stopped there briefly while enroute to Jamaica last July. Subsequent to that visit, the Mission Committee decided to investigate further in that area. The result has been that, beginning with Sunday, September 30, several of our ministers have spent consecutive three-week periods in Houston. The first of those visits was made by Rev. Engelsma, the second by Rev. Kuiper, and the third by Rev. Kortering. That would bring us through Sunday, November 25. Because, as Southeast’s bulletin pointed out, “the nature of this work demands that there be continuity,” our efforts in Texas will be carried on further by Rev. Schipper, who has been requested by the Mission Committee to spend the first three weeks of December there.

In other news, we find that Professor Hanko spent the first weekend of November in Maine “upon the request of the congregation there.” Rev. Engelsma has declined the call extended to him by our church in Prospect Park, New Jersey. Rev. Lanting, incidentally, preached there on the last two Sundays of October and the first of November. Rev. Van Baren declined the call from South Holland.

You might be interested in knowing that the recent Seminary Fund Drive has brought the total cash and pledges, as of October 31, 1973, to $122,222.98. Outstanding pledges amount to approximately $28,000. The October 31 total, by the way, suggests an average per family contribution, throughout our own seminary building. That’s really wonderful, it seems to me. Wonderful it is too, that quite a number of contributions (some of them considerable) have come from outside our denomination.

The past couple of months has, as has become somewhat customary at that time of year, seen a goodly number of public lectures sponsored by our various churches. In South Holland, on October 15, Rev. Kortering spoke on “Biblical Evangelism.” In First Church, on October 25, Prof. Hanko lectured on “The Gospel and the Free Offer.” On November 16 he delivered that lecture in Randolph. On that same evening, Rev. Engelsma was speaking in the Loveland Community building. The topic of his “Reformation Day lecture” was, “The Reformation and Good Works.” That program was sponsored by the Loveland Church Extension Committee, which noted that “the emphasis will be on the necessity and obligation of the believer to do good works, something which is not the replacement of grace but rather the fruits of it. The lecture will be advertised in the Loveland, Longmont, Fort Collins, and Greeley newspapers, in addition to announcements over KLOV.”

The Reformed Witness Committee (of Doon, Edgerton, Hull) sponsored a series of lectures in Holland, Minnesota. On October 17, Rev. Lanting spoke on predestination. The antithesis was the subject of a speech by Rev. Moore on October 24. And, on October 31, Rev. Kortering lectured on the Reformation. The committee also planned to sponsor two lectures in the public school auditorium of Sioux Center. On November 12, Rev. Engelsma was to deliver his address on. Key 73, and on Dec. 3 Rev. Kortering will speak on “Biblical Evangelism.”

Just a little further back is the series of lectures sponsored by the Reformed Witness Committee of Grand Rapids Hope Church. The lectures were held in the Coopersville High School auditorium on the evenings of September 20, October 4, and October 18. For the first in the series, Rev. Van Overloop spoke on “The Organism of the Truth.” The topics of his second and third addresses were “The Relationship Between the Truth and Life,” and “The True Church.” 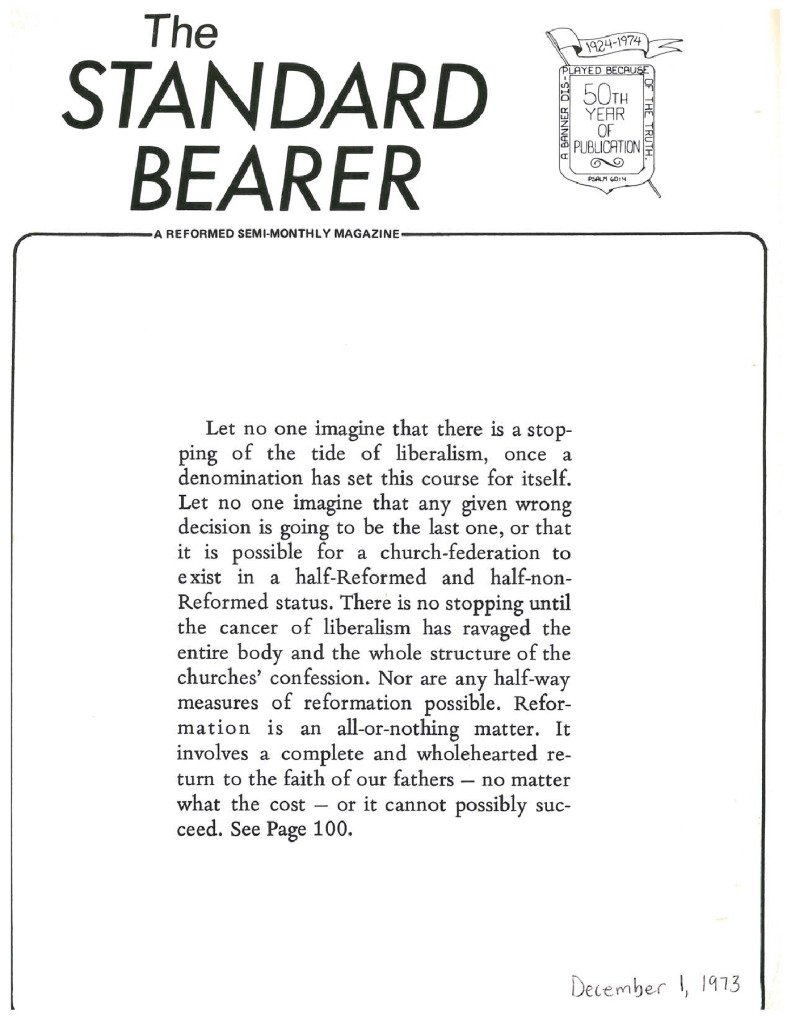