Do you know how many PRCA churches have been organized since the year 2000? Answer later in this column.

On August 20 the congregation at Doon, IA PRC received a letter of decline from Rev. Clayton Spronk to be a missionary to the Philippine mission field. We are thankful for God’s clear revelation to Rev. Spronk.

Also on August 20 the congregation at Byron Center, MI PRC called Rev. Brian Huizinga to be their next pastor. Rev. Huizinga declined this call on September 10.

Candidate Matthew DeBoer accepted the call extended to him from the Edgerton, MN PRC and was examined by Classis West in September.

Candidate Justin Smidstra accepted the call extended to him from First PRC of Holland, MI and declined the call from Southwest PRC.

The Council at Southwest PRC of Wyoming, MI announced a trio from which to call a pastor: Rev. A. Lanning of Covenant PRC of Singapore, and Candidates David Noorman and Stephan Regnerus. Candidate Regnerus received this call on September 10.

Rev. Tom Miersma bade farewell to the congregation in Lacombe, AB, and laid down the active pastoral labors for emeritation. We thank God for his 35 years of service, including years as missionary in Alamosa, Spokane, and Pittsburgh, and pray for God’s continued blessing upon him and his wife Jan as they settle into their new home in Edmonton.

The Evangelism Committee of the Doon, IA PRC announced a conference on “The Foundations of a Healthy Marriage.” This was held at the Rock Valley, IA high school auditorium on September 15-16 with Revs. A. Brummel, J. Engelsma, and J. Laning presenting speeches on this timely subject.

A new PRC Psalter app (Android) has been developed by Hope PRC member Jonathan Vermeer. You will find it in the Google Play Store. The app includes lyrics and tunes to all of our Psalter numbers and links to the Psalms themselves. Plus, it has a special “night mode” setting for use in the dark (as, for example, for campfire singing).

The Covenant Protestant Reformed Church of Northern Ireland announces the dates for the 2018 British Reformed Fellowship Conference. The plans are for this to take place from July 21-28 at Hebron Hall near Cardiff, South Wales. So now you can start planning next summer’s vacation!

Two times a month Rev. Vernon Ibe, pastor at the Berean PRC in Antipolo City, Rizal, Philippines, has been preaching in the nearby Kerruso Community Church in Tondo, Manila. He has also been teaching them the “Essentials of Reformed Doctrine” catechism, with the idea of moving on to the Church Order next. This congregation is small—about 9 families and 40 souls—and was originally an independent Pentecostal church. In the past, the PRC of Bulacan and Rev. John Flores spent time teaching this group the “Essentials of Reformed Doctrine.” Through Rev. Flores’ instruction the group became very interested in the Reformed faith. Many members also left in resistance to the Reformed teachings, which is almost always the case. In 2015 Pastor Ibe was asked by the consistory of the PRC in Bulacan to assist in the work of teaching and leading this small flock. According to Rev. Ibe “By the grace of God, they are growing in their knowledge of the grace and love of God in Christ and in their appreciation of the same, manifest in their faithful hearing of the precious gospel of Christ both in preaching and teaching!”

In another small way the truth of the Word of God and the Reformed faith goes forth!

The Protestant Reformed Seminary is sponsoring a conference commemorating the 500th anniversary of the Reformation. The conference theme is: “Here We Stand!” It will be held at Faith PRC on October 27 and 28, 2017. There will be six speeches given by three professors and three ministers—Rev. S. Key, Rev. M. McGeown from the Limerick Reformed Fellowship, and Rev. David Torlach from the Evangelical Presbyterian Church of Australia. Please make plans to attend. Visit the special website for more details: www.500thReformed.com.

Rev. W. Langerak and Prof. R. Cammenga departed August 31 for 12 days (two Sundays) in South Korea on behalf of the Contact Committee and at the request of some ministers in the Koshin Presbyterian Church (a denomination of some 360,000 members formed in 1952) who became acquainted with the PRCA while studying for their degrees at Calvin Seminary in Grand Rapids, MI. Prof. Cammenga was asked to deliver the keynote address at a Reformation Day conference in Seoul Central Church. They also requested speeches in 3 more churches, lectures at 3 seminaries (in Anyang, Suwon, and Cheonan, which has over 400 students), and forums on topics such as theological education in the PRC, the Reformed doctrine of the church, the role of elders, common grace and the well-meant offer, and the history and practices of the PRC. Mrs. Karen Langerak and Mr. John Van Baren accompanied the delegation.

Here’s an interesting school fundraiser from the Edgerton, MN PRC bulletin: “The Ladies Circle is sponsoring a fund raiser at Tucker’s Walk vineyard where we will be picking grapes on the morning of September 9 from 8:00 a.m. to noon. Tucker’s Walk provides lunch after we finish picking. Please consider joining us for a morning of fellowship and enjoying God’s creation.”

Covenant Christian High’s Fall Festival is scheduled for October 7 with food and activities for all. The annual Craft Show is scheduled for October 28 with over 100 booths to shop from. Cinnamon rolls, pizza, subs, and desserts are offered, with proceeds to benefit the band and boosters programs at Covenant. Young people’s activities The young people of Randolph, WI PRC were invited to the parsonage for a kick-off of their society season. The evening included supper, games, and a camp fire.

There have been seven PRCA churches organized since 2000. In Classis East: Trinity, Providence, and Zion in Michigan, along with Pittsburgh, PA. In Classis West: Calvary in Hull, IA; Covenant of Grace in Spokane, WA; and Heritage in Sioux Falls, SD. More trivia next time. 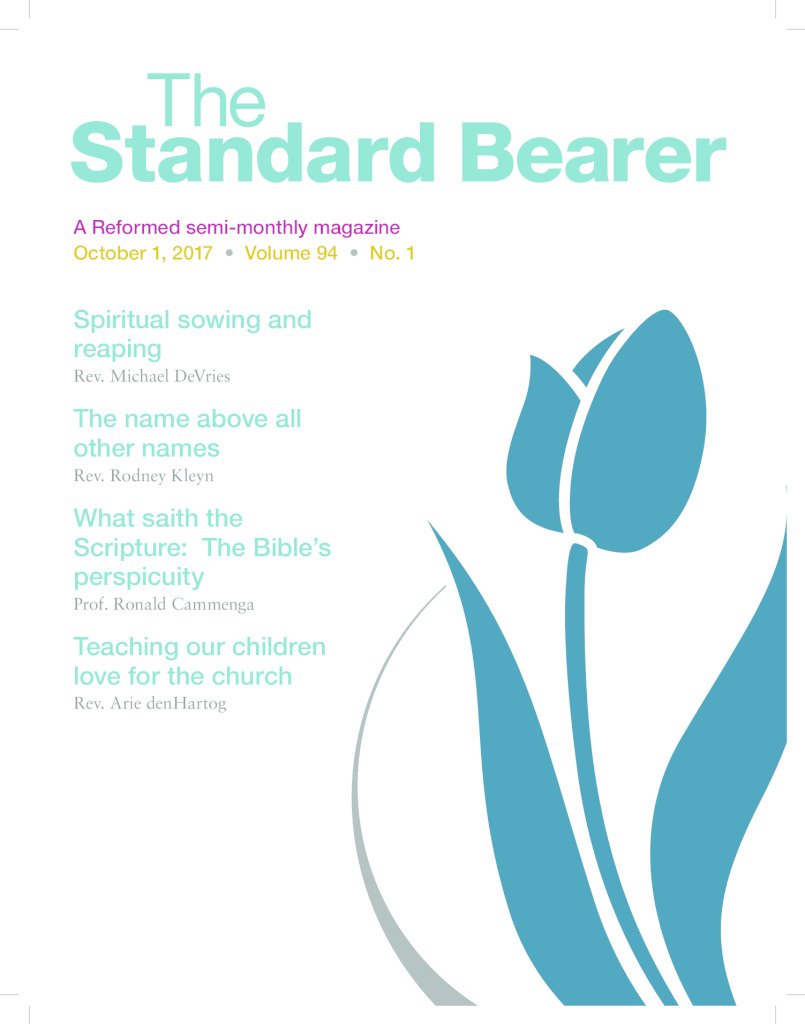