You may realize that Classis West of the Protestant Reformed Churches in America has 15 member churches today. Do you know how many congregations there were in Classis West in 1951? Answer later in this column.

Supporters of the Loveland Protestant Reformed School made money for the school by delivering flowers for Valentine’s Day on February 13 and 14 for Lowe’s Flowers, a local business. A pleasant way to help the school…driving around delivering beautiful and aromatic flowers for a day!

The Protestant Reformed Student Orchestra (PRSO) presented a concert of classical, sacred, and fiddle music on Thursday, February 16. This year, the concert location was at St. Cecilia Music Center in Grand Rapids. The PRSO also has a new website; go to prso.org to learn more about the Student Orchestra!

A quote to ponder from a PRC church bulletin: “I’ve never met a Christian who is healthier, more mature, and more active in ministry by being apart from the church. But I have found the opposite to be invariably true. The weakest Christians are those least connected to the body. And the less involved you are, the more disconnected those following you will be. The man who attempts Christianity without the church shoots himself in the foot, shoots his children in the leg, and shoots his grandchildren in the heart.” Interestingly said.

A farewell program to recognize Rev. Arie denHartog’s emeritation was held at Southwest PRC on Friday, February 24 after the annual congregational potluck meal.

Classis West met March 1 at Hope PRC of Redlands, CA, while Classis East is scheduled to meet next on May 10 at Byron Center PRC.

Printed by permission from a recent Covenant Evangelical Reformed Church of Singapore’s bulletin:

Today we witness the Confession of Faith and Baptisms of the Lehnert family. Not only is it a great joy to welcome an entire family into the church, but we also have the opportunity to observe a Confession of Faith, an Adult Baptism, and two infant/ child baptisms. Because of the many elements involved in this, it is worthwhile to review the order in which the sacrament will be administered today. We will begin by reading the Introduction of the Form for the Administration of Baptism, followed by the first section, “To Infants of Believers.” We will then jump to the second section, “To Adult Persons,” followed by the Prayer. We will then ask the Lehnert family to rise and come forward to the front of church to answer the questions. The first set of questions will go to Curtis (father), who was already baptized as an infant, so we will ask him the questions for “Public Confession of Faith.” The second set of questions will go to Esther (mother), who has not been baptized, so we will ask her the questions for adults from the Baptism Form. The third set of questions will go to Curtis and Esther together regarding the baptism of their children. The entire family will then be invited to the platform, where Esther will be baptized first, followed by Gabriella and Roman. We thank God for adding this family to CERC, as well as for all of those who have recently made Confession of Faith and have been baptized.

Truly God is good to His covenant people!

Rev. Daniel Holstege and family are adjusting well to their new home in Antipolo. After being there a few weeks, they were over the time change and jet lag; but it will take a while to adjust to the culture change. They are able to sleep through the crowing of the neighborhood roosters and have experienced jeepneys, trikes, trains, and traffic. But according to Rev. Holstege, they have not yet had an opportunity to ride a carabao. Perhaps that will happen in the future. We continue to keep the Holsteges and Kleyns in our thoughts and prayers. The Holstege family’s papers have been transferred to Doon PRC.

The Classis of the PRCP met February 25 at the Maranatha PRC in Valenzuela City.

Instead of 15 member churches, Classis West had only 11 in 1951. They were Bellflower and Redlands in California; Doon, Hull, Orange City, Oskaloosa, Pella, Rock Valley, Sioux Center in Iowa; Edgerton, Minnesota; and Manhattan, Montana. Only four of the 11 exist today, as God used the history of 1953 to powerfully prune this portion of His vineyard. More trivia next time. 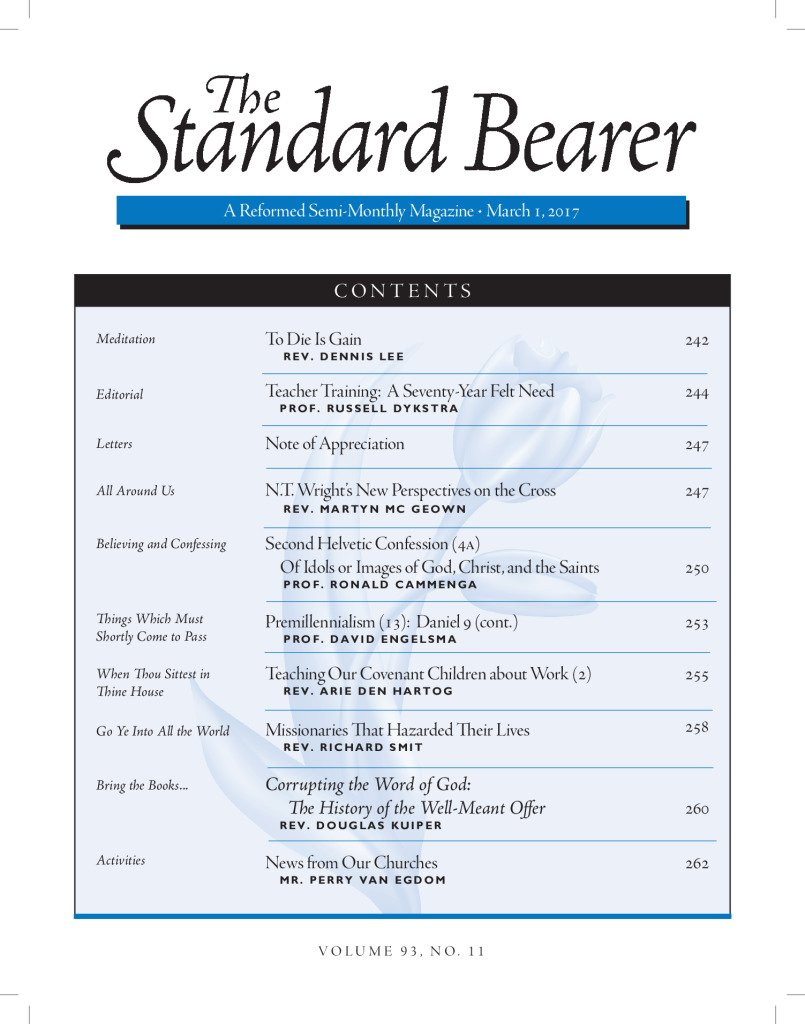