The Lynden, WA PRC welcomes young adults to their planned Protestant Reformed Young Adults Retreat to be held at Warm Beach Camp and Convention Center, 40 miles to the south of Lynden, on July 3-7, 2017. Registration opened in January and more information can be found by e-mailing Kyle Hanko at kyhanko@gmail.com

The Maranatha PRC of Valenzuela City, Philippines held a “Thanksgiving Fellowship” after their services on January 8 to remember the goodness and faithfulness of our God and Father through the Lord Jesus Christ for the past year of 2016.

Pastor Daniel and Leah Holstege and family, along with Leah’s parents Lou and Cheryl Regnerus, departed from Chicago for their mission home in the Republic of the Philippines on January 11. They arrived safely in Manila and moved into the former Smit residence. On January 15 they attended the services at Provident Christian Church in Marikina where a special lunch was held in their honor to welcome them. Rev. Holstege preached in Marikina the next Sunday. May God bless our new missionary family in their new home!

There will be a young people’s camp in the Philippines. This is scheduled for April 12-14 at Paenaan Campground, Antipolo City. The theme will be “Love Not the World” from I John 2:15. Three speeches are planned: “Youth and Money” by Rev. John Flores, “Youth and Technology” by Rev. Leovy Trinidad, and “Youth and Society” by Rev. Vernon Ibe. All area young people are being encouraged to attend this exciting spiritual opportunity!

Rev. Vernon Ibe, pastor of the Berean PRC located in Antipolo City, Rizal, Philippines, still makes the long trip to Gabaldon twice a month to teach an Essentials of Reformed doctrine class there. The group of about eight families meets about two miles north of the former church building, next to Brother Lando’s home. There is a hope to once again start up worship services there, possibly in the next year. We pray for God’s continued care and spiritual nourishment for the people there!

Pastor A. Spriensma spent a few days in January in Franklin, PA to do investigative work for the DMC and to preach to the saints in that area.

The Council of Doon, IA PRC announced a new trio for the purpose of calling a third missionary to the Philippines. The trio included Revs. G. Eriks, J. Mahtani, and C. Spronk. On January 15 the call was extended to Rev. Mahtani. May God grant guidance and a clear answer to this call.

On January 8 Rev. Gary Eriks, pastor at Hudsonville, MI PRC, announced his decision concerning the call extended to him from Southwest PRC in Wyoming, MI. God led Rev. Eriks to decline this call. We are thankful for a clear indication of God’s will. A new trio was then formed, consisting of Revs. S. Key, R. Kleyn, and C. Spronk. On January 22 Rev. R. Kleyn received this call.

The Council of First PRC of Holland, MI announced a new trio: Revs. A. Lanning, C. Haak, and R. Kleyn. The congregation voted to call Rev. A. Lanning on January 22.

From the bulletin of Heritage PRC in Sioux Falls, SD:

On Sunday evening, January 29, during our 4:00 p.m. service we will commemorate 10 years of worship services in Sioux Falls. After the evening worship service we will have a congregational luncheon. Under the auspices of the Domestic Mission Committee and oversight of Edgerton PRC, worship services began on January 28, 2007 in the Ambassador Room at the Holiday Inn downtown with Rev. Rodney Kleyn preaching for the morning service and Rev. David Overway preaching in the afternoon. Rev. Brummel will preach an appropriate sermon and we urge you to invite family and friends to join us in celebration of God’s faithfulness. A group photo will be taken after the evening service, so we encourage everyone to be present.

In these 10 years God has made it possible for Heritage PRC to become a congregation and to purchase their own church building. We give thanks with them for His goodness to their congregation!

On January 8 the congregation of the Covenant Evangelical Reformed Church of Singapore witnessed the installation of Rev. Emmanuel Singh as missionary-pastor to Kolkata, India. This marked the beginning of Rev. Singh’s official ministry in the CERC. He is now authorized by Christ to perform the labors of missionary in Kolkata. A solemn event, but also a very joyful one! We thank God for leading the CERC and Rev. Singh to this point and continue to pray for God’s grace to send forth the glorious gospel of Jesus Christ wherever He opens a door.

The Young People’s Society at Loveland, CO PRC scheduled a Mexican-themed dinner and silent auction on Friday, February 3. They served burrito bowls, quesadillas, drinks, and desserts, with a silent auction after the meal. All the donations will help the twenty-five members in the society attend the Western Retreat and Young People’s Convention.

The current sophomores and juniors in Loveland, CO Protestant Reformed School are beginning their fundraising for their class trip to Washington DC, planned for the spring of 2018, D.V. On Monday, January 16 they sponsored a night at Pizza Ranch with a portion of all sales going toward their trip expenses. Now that sounds like a trip worth eating for!

Classis East of the PRCA met in regular session on January 11 at Georgetown, MI PRC. Classis approved the request of the group desiring to be organized as Zion PRC in the Hudsonville/Jenison area. The Council of Faith PRC was appointed to oversee this organization, which was held on February 8. 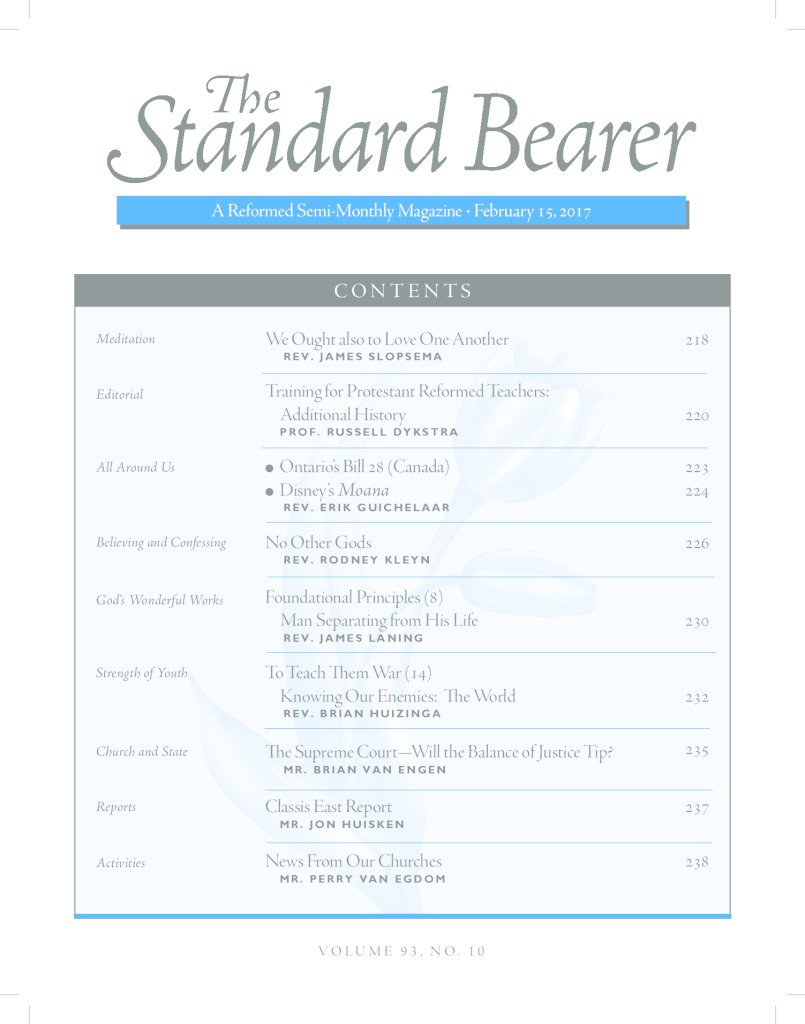