“Fear is here! And though we wanted it otherwise, we brought it with us into the New Year.” Thus writes Rev. John Heys in a previous SB (volume 46, issue 7). “Putting up a new calendar, calling the month by a different name and the year by another number does not take away the fears we had in the year that is gone by with startling swiftness.” (Read more by Rev. Heys to see how the gift of faith abolishes fear!)

Also…, as the year of our Lord 2017 is now underway, we note that John Newton wrote the hymn “Amazing Grace” to accompany his sermon on New Year’s Day 1773 and introduced it to his congregation at that time. What comfort it provides at this occasion! “Through many dangers, toils and snares I have already come; ‘tis grace hath brought me safe thus far, and grace will lead me home.”

You may know that the state of Michigan contains more Protestant Reformed congregations than any other state in the USA. Do you know how many? And…, which state has the second most PRC congregations? Answers later in this column.

Prof. Barry and Lori Gritters and Deane and Donna Wassink left for a three-Sunday stay with the PRC of Vellore, India in late December. Prof. Gritters was to be involved especially with the Sola Gratia Program in training area pastors in the Reformed faith and the pastoral ministry. He also preached and taught in the PRCV, English congregation, and village out-reach. The Wassinks assisted in all these labors, as well as directed their attention to the Tamil congregation in expanding and strengthening our bonds in Christ with the PRCV. Pray for the Lord’s blessing on the work there.

The Council of Byron Center, MI PRC announced the following trio of pastors from which the congregation voted to call the denomination’s next home missionary: Rev. C. Haak, Rev. B. Huizinga and Rev. R. VanOverloop. The congregational meeting for calling a missionary was set for Sunday evening, January 1 after the evening worship service. At this meeting Rev. VanOverloop received the call to this position. May God grant a clear indication of His will to Rev. VanOverloop.

On January 8, Rev. Garry Eriks declined the call from Southwest PRC in Wyoming, MI. Rev. Arie denHartog preached his farewell sermon there in the evening service on January 1. We give thanks for the many years of service by Rev. denHartog, as God has certainly used him for good in our denomination! Rev. denHartog served congregations in Wyckoff, NJ; Randolph, WI; and Redlands, CA in addition to Southwest PRC. He also served as foreign missionary to Singapore as well as minister-on-loan there later.

The Psalm Choir began its current season recently and meets each Sunday at 2:15 p.m. in Grandville, MI PRC. And the Protestant Reformed Student Orchestra plans to hold its year-end concert on February 16 at St. Cecelia’s Music Center.

First PRC of Edmonton, AB, Canada enjoyed their annual coffee and olie bollen together on New Year’s Day, while Covenant of Grace PRC in Spokane, WA held their monthly fellowship lunch on January 8.

The Protestant Reformed Seminary in Wyoming, MI concluded its first semester of classes and its exams in early December. December 31 marked the end of internships for seven senior students. Many of these young men expressed appreciation for this time of internship. They returned to the seminary for morning Interim classes from January 9-18. The Interim course was entitled “The Schism of 1953” and was taught by Prof. R. Dykstra. The class was to cover the doctrine and history of the split of 1953 and was open to auditors. May God bless the professors and students as they continue in the labors of the school year! How vital to the health and well-being of our churches is our theological school! And we continue to praise and thank God for raising up godly young men to pursue the office of the ministry.

Supporters of Adams Christian School had opportunity to lend financial funding to their school by dining at Grandville, MI Big Boy on January 12, when profits there benefited the school.

Rev. Ron VanOverloop, Grace PRC of Standale, MI and elder Sid Miedema from Byron Center PRC, along with their wives, traveled to Northern Ireland to conduct church visitation with the Covenant PRC there. Rev. VanOverloop also presented the lecture “Content with Who I Am in Christ,” as well as leading a Tuesday morning Bible Study on the topic of “Paul’s Prayers for the Ephesians.” The visitors took part in Covenant’s congregational dinner on January 20 and Rev. VanOverloop preached in the Limerick Reformed Fellowship on January 22, D.V.

The state of Michigan is home to fourteen Protestant Reformed Churches, while the states of Illinois and Iowa are home to three each. More trivia next time. 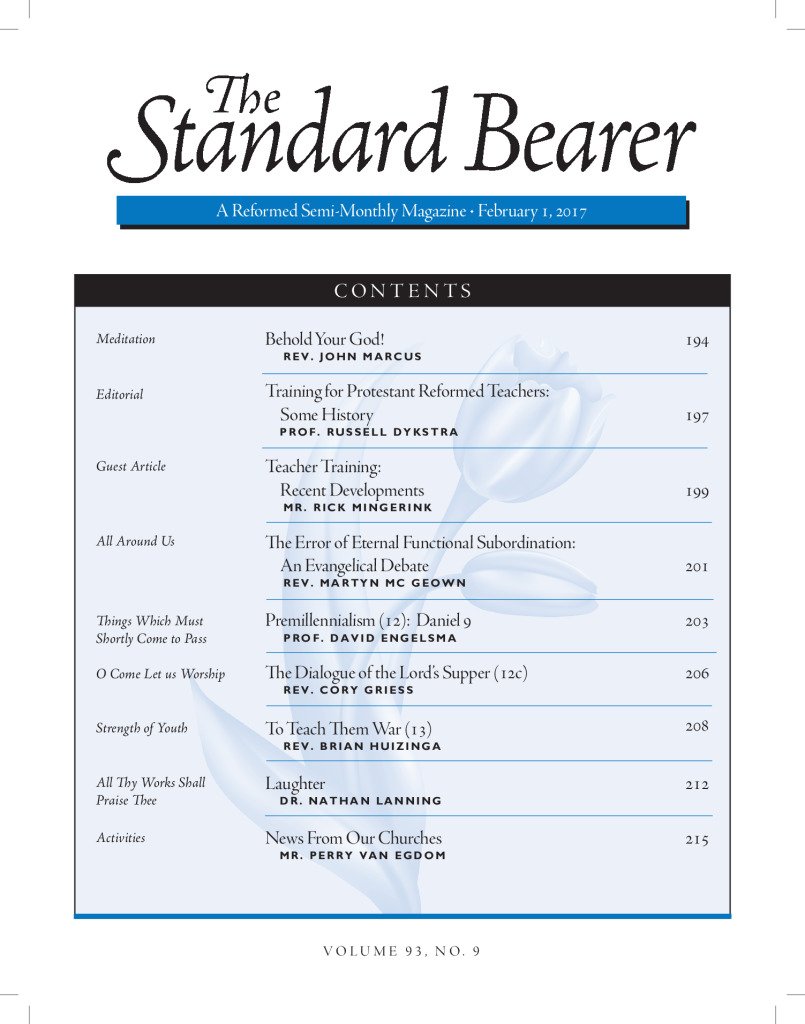