Our congregation in Redlands, California has extended a call to Rev. Gise Van Baren to be their pastor. The Redlands trio also included Rev. Richard Moore and Rev. James Slopsema.

Mr. and Mrs. Dewey Engelsma left for Singapore on April 29. They will assist Rev. Arie den Hartog in his mission work there. According to the bulletin of our Covenant PRC, the Engelsmas plan to work in Singapore for about three months.

In accordance with Article 44 of our Church Order, church visitation is done once a year. Usually this is done before Classis meets in the spring. Rev. C. Hanko and Rev. J. Heys serve as church visitors for Classis East. In addition to performing their official function when visiting our Covenant Church in Wyckoff, New Jersey, the church visitors will also give two public programs for the congregation. Rev. Heys will show pictures of New Zealand on Thursday evening May 8 and talk about his work there as minister-on-loan. On Friday evening, May 9, Rev. Hanko was scheduled to give a public lecture on the subject of Worship.

Rev. Ronald Hanko, pastor of our Covenant Church, was twice invited to preach for the morning service at the People’s Park Reformed Church of Paterson, New Jersey. With the permission of his consistory he did this on January 27 and March 23. This is possible as Covenant’s morning worship service does not begin until 11:30 A.M.

First Church, through its Church Extension Committee, conducted worship services in Bradenton, Florida beginning in December of 1978. Five of our ministers labored there. In a three-page newsletter to the congregation concerning these labors, the consistory further describes the history of the work. “It happened that, by the end of April (1979), the consistory had pretty much exhausted its list of ministers available to carry on the work. We had no choice therefore but to discontinue, for the time being, our efforts in Florida. In light of the reports of those who had labored there, however, we could hardly abandon the field entirely — unless we were willing to discount the unanimous testimony of the Lord’s ministers who had preached His Word in Florida. We therefore made arrangements during the summer for a renewal of the work in the fall.” This was done, beginning in November. “. . . We had hoped that we would be able to obtain the services of several ministers, each of whom could make a more extended stay in Bradenton. As it turned out, we were somewhat disappointed in that regard, for only one minister was able to remain longer than a month. But we were nevertheless most grateful to the consistories of our sister churches for their willingness to send their pastors for up to four weeks.”

Rev. C. Hanko spent some two months in Bradenton this winter. Part of his report reads as follows: “I was deeply impressed by the interest shown by the members of other churches who attended our services. We had visitors from many denominations. Almost without exception they spoke with appreciation of the truth as proclaimed by the various ministers who labored there last year and this year. Repeatedly the remark was made that we maintain the truth as it was confessed by our fathers. Some lamented the apostasy and laxity in their own churches. Almost without exception they urged us by all means to continue the work there.”

Reluctantly, the work in Bradenton has been suspended at the end of April. A continued supply of ministers was not possible through the summer months. In addition, the place of meeting was proving unsuitable as it is being converted to serve as a bingo parlor. Finances are another problem. By the end of April, $4,000 of the $5,000 budgeted for church extension work in 1980 was expended.

The consistory does not feel the work in Bradenton is finished. An attempt is being made to find a more suitable place for meeting. An attempt will be made to enlist the services of retired ministers so that fewer men will be involved for longer periods, and in doing so, less of an imposition will be made on sister congregations. The consistory has stated its intention to call a special congregational meeting to explain further the work in Bradenton and to give the congregation an opportunity to ask questions about it.

The newsletter concludes on this note, “Our churches are heirs to a precious Reformed heritage. Perhaps we do not always appreciate that as we should. Those from other denominations who attend our services in Bradenton recognize it. The King of the Church has been pleased to use us, the First Protestant Reformed Church of Grand Rapids, to share it with them. We thank Him for that.” 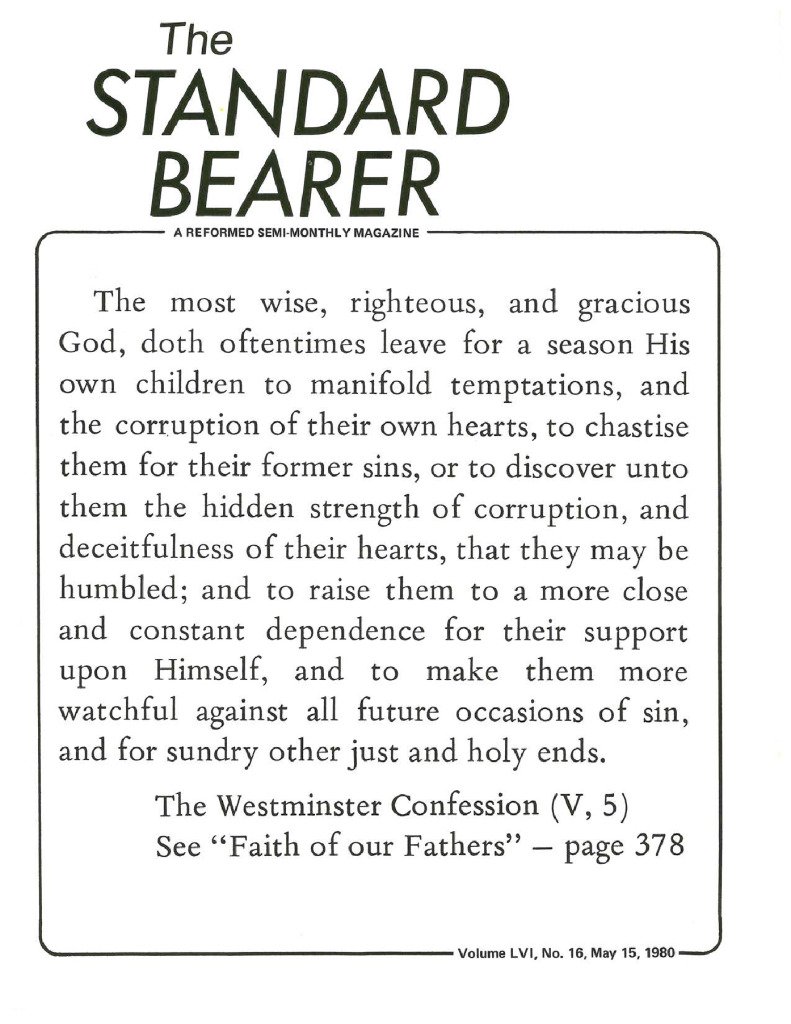