The congregation at Byron Center, MI PRC held a sledding party on Saturday, February 6. Sledding began at 3 p.m. at Byron Christian School east campus with supper at Adams Christian School. In case of no snow, the gym at Adams was open.

Families and friends of Southeast PRC in Grand Rapids, MI enjoyed an afternoon of sledding at the Mines Golf Course on Saturday, January 23. Brats and hot dogs were on the menu. All were requested to bring their sleds and snacks to share, with hot chocolate being provided.

Trinity PRC in Hudsonville, MI opted for something a bit warmer. Their Activities Committee organized an evening of swimming and pizza at the Zeeland Rec Center on the evening of Friday, January 15. Whichever the activity, we are sure a good time was had with good fellowship and good food always available—and a bit of fast action as well!

Or with this next one, you would have a warm or cold choice! The Ladies’ Circle in Doon, IA plans to host their annual “Pool Party” at the All Seasons Center on the campus of Dordt College later in February. This grand facility boasts not only a large pool with slides and kiddie swim area, but also a regulation ice rink where the Dordt College Blades’ hockey team plays its home games. Both were available after supper so that one could swim or skate, or split the time and do a bit of both.

The 8th grade class of the Protestant Reformed Christian School of Dyer, IN hosted a bean bag tournament on Friday, January 29. Anyone from the area high school age and older could sign up their team to support the school fundraiser. We understand each year lots of spirited throwers get their arms loosened up for this event. The money raised is put to good use, such as a class trip or class gift to the school.

Rev. John Flores and elder Reden Zuniega of the Protestant Reformed Church in Bulacan, Philippines recently visited their mission outreach, the Protestant Reformed Fellowship in Albuera (PRFA), on the Philippine island of Leyte. This occurred in late January and was due to a plague of sorts that ruined the crops in the Albuera area. Both the physical and spiritual status of the group was evaluated, with Rev. Flores preaching in the PRFA on January 31.

In addition, Rev. Flores continues to lead a Bible study via Skype with a group called Overseas Philippine Workers located in Bahrain. This occurs at midnight Manila time.

Rev. Jonathan Mahtani, pastor at Cornerstone PRC, IN continued to consider the call to be the second missionary to the Philippines and planned to answer on January 31, D.V. May God grant to Rev. Mahtani the answer to this call, as we are certain He will.

Chaperones are needed for the 2016 YP Convention hosted by Grace/Wingham PRCs from August 8-12, 2016 at Lake Williamson in Carlinville, IL. Chaperone applications and medical forms should be submitted online via the convention website at http://www.prcconvention. com/2016/chaperones.cfm. Please submit your applications soon to participate in this opportunity of service and Christian fellowship! Email any questions to prcconventionchaperone@gmail.com.

Many joined together at the Hudsonville, MI Rainbow Grill for breakfast, lunch, dinner, and supper on Wednesday, January 13, for great food and wonderful fellowship with family and friends, the additional purpose being to raise money for the Hudsonville PRC young people to attend the 2016 Young People’s Convention.

Classis East met in regular session Wednesday, January 13 at Trinity PRC, Hudsonville, MI with most of the business deemed routine. Reference the Stated Clerk’s official report also in this issue.

Classis West is scheduled to meet next on Wednesday, March 2 at Crete, IL PRC.

When Rev. Nathan Decker traveled with Pete VanDerSchaaf to the Covenant Protestant Reformed Church in Ballymena, Northern Ireland as a church visitor, he used the opportunity on January 13 to lecture on “God’s Beautiful Covenant of Grace.”

This announcement appeared in the bulletin of the Covenant Evangelical Reformed Church of Singapore on January 10, 2016: “This morning we sing Psalm 150, as versified in Psalter #s 409, 411, and 412. This brings us to the end of the project we began over three years ago of singing consecutively through the Psalms each Sunday. We sang Psalter #1 (Psalm 1) on 2 December 2012, and we now conclude with Psalm 150 on 10 January 2016. At the conclusion of our project, we do what Psalm 150 instructs us: “Praise ye the Lord. Praise God in His sanctuary: praise Him in the firmament of His power…. Let everything that hath breath praise the Lord. Praise ye the Lord.” Let us give thanks to God for the gift of the Psalms, and let us continue to grow in our love for these holy songs as we sing them each Lord’s Day.” The same thing has begun in the congregation at Doon, IA PRC, although they are only up to Psalm 18, expecting to conclude in the year 2018, Lord willing.

Following the seminary Interim class (January 4-13), Prof. Ronald Cammenga and all the seminary students traveled to Southern California to attend the Westminster Seminary Conference. The men stayed the weekend and fellowshipped with the congregation at Hope PRC, in Redlands. The seminary’s second semester began classes on January 20. 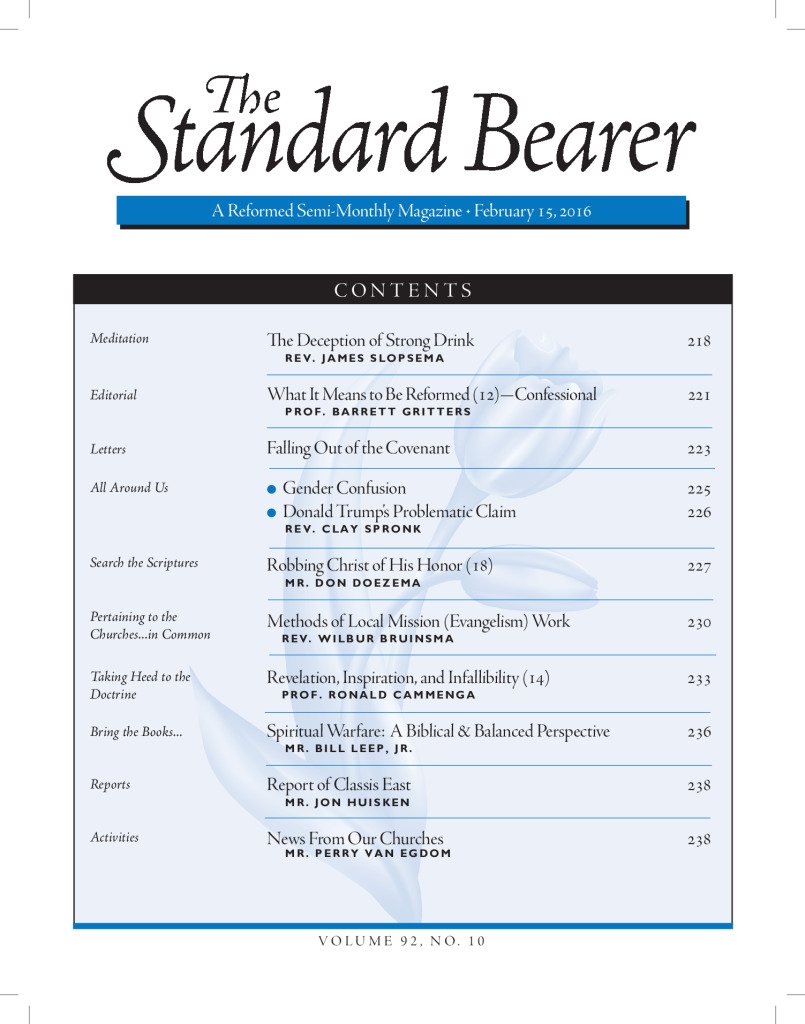