Pastor Carl and Mary Haak (Georgetown PRC, Hudsonville, MI) left on November 11 for a three-week stay (November 11-30) with the PRC of Vellore, India. Deane and Donna Wassink, also from Georgetown PRC, joined them on November 25, and then Rev. Cory Griess and Rev. Doug Kuiper from the Foreign Mission Committee (FMC) arrived on December 1. The Wassinks and the ministers from the FMC returned home on December 14. In all, a five-week stay was scheduled with the saints of God in the PRC of Vellore.

During this time numerous conferences were arranged with area pastors, eight seminars were held, visits were made to three cities plus numerous villages where outreach is done, and visits were conducted at the Grace Foster Home. The delegates also planned to spend time with Pastor Paulraj and his wife Kasthuri to give them encouragement in the work. The purpose of the visit was to get to know the work and the people there to see if and when the Foreign Mission Committee can assist Georgetown PRC in her work in India.

The evening of Thursday, December 3, was reserved by the Council and congregation to celebrate the 40th anniversary of God’s faithfulness to the First Protestant Reformed Church of Edmonton, Alberta, Canada. We rejoice with the saints there as we reflect on God’s goodness to them as a congregation!

On November 13, girls grade eight and older enjoyed a fun-filled, enriching night at Georgetown PRC in Hudsonville, MI. The theme of the evening was “The Road of Life: Walking Together” and the text was taken from I John 1:7. There were devotions, a panel discussion, fellowship, and food. Those in the area were encouraged to invite friends, neighbors, and relatives. Girls and young women through college-age took fun pictures in the photo booth and learned how to live out their walk of faith together. A good and spiritually rewarding activity for the young ladies!

It is noteworthy when one of our churches cancels services. That is exactly what happened at Covenant of Grace PRC in Spokane, WA on Sunday, November 22. The prior Tuesday a storm with winds measuring 70-100 mph hit the area. This storm lasted from about 3:00 p.m. until after midnight. Trees were uprooted and others snapped off. The trees took down power lines, fell on houses, and blocked roads. By the next morning more than 200,000 electrical customers had lost power—most of the Spokane population. And it stayed off—for six whole days! According to Rev. Rodney Kleyn, the power company stated that it was the worst disaster they had ever dealt with as crews and linemen from six states were called in to help. Nighttime temperatures fell to about 20 degrees and it was difficult to keep the homes warm. The Kleyns and many others had no electricity, no lights, no furnace, and no hot water. The children had no school for three days, and without power or heat the Sunday services were cancelled. There was joy in Spokane when the electricity came back on the next Tuesday!

The congregation in Loveland, CO PRC was invited to the annual Thanksgiving chapel and delicious turkey dinner held each year the day before Thanksgiving. Many attended, thanking God at the chapel and enjoying His earthly bounties afterward!

The Lacombe, Alberta, Canada Young People’s Society invited the congregation there and also the Edmonton congregation to attend the soup supper and pie auction they had planned as a fundraiser for the convention. It was held on November 20 at Genesis Protestant Reformed Christian School. All joined together for an evening of great fun, fellowship, and food!

And at Edmonton their annual Remembrance Day car rally was held on November 11. That’s always a big hit north of the border!

The annual PR Young People’s Thanksgiving Mass Meeting was held at Faith PRC in Jenison, MI on November 22. The meeting was opened with prayer and Scripture reading from Genesis 33. After the singing of Psalter #7, Rev. Richard Smit was introduced to the audience of young people. He addressed them from Genesis 33:9-11 on the theme “I Have Enough.” This passage admonished the young believers to true contentment in our Lord Jesus Christ and called attention to God’s blessings through this life and the things of this life by His grace alone. Special numbers were rendered, and after closing prayer the group enjoyed refreshments. A profitable time was enjoyed by the estimated 200 in attendance.

The Board of Education of Trinity Christian High School in Hull, IA organized the annual Promotional Supper in November. After punch and opening devotions a grand meal was served, followed by a God-glorifying program by Trinity’s Senior Choir. The group returned to the fellowship hall for delicious desserts, where an offering was taken to benefit the school. What a blessing God has given in our own Protestant Reformed high schools!

A delegation from the Contact Committee of the PRCA (Profs. R. Cammenga and R. Dykstra) traveled to the Philippines in December (10-21) to begin work on sister-church relationships with the Protestant Reformed Churches there. Rev. Daniel Holstege and his wife are scheduled to travel there in January to help with the work on the mission field. All if the Lord wills. 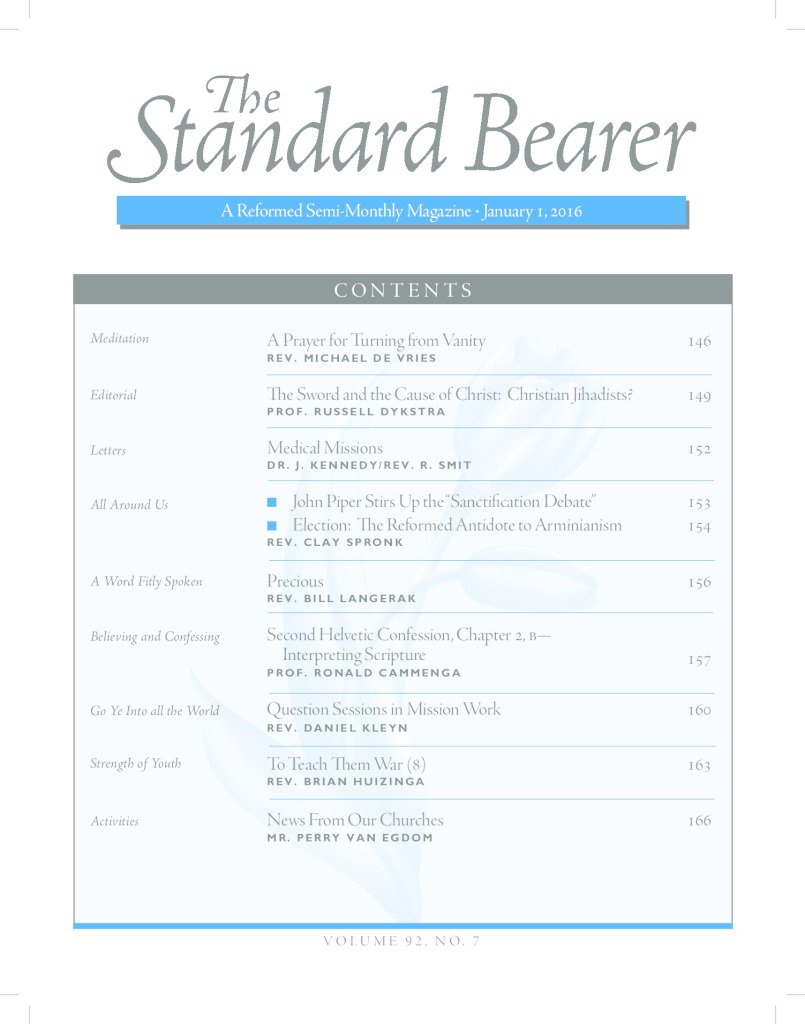