Classis West of the Protestant Reformed Churches met in Doon, IA PRC on March 4. The business was mostly routine. Classis West plans to meet next on September 30 in the PRC of Edgerton, MN.

The Evangelism Committee of Trinity PRC, Hudsonville, MI held a personal witnessing seminar for members of their congregation on February 25 and March 4. The seminar took the place of the society meetings normally scheduled on those dates.

There is a PRC Young People’s Convention on the horizon! Scheduled for August 10-14, the 2015 convention will be hosted by Southeast PRC of Grand Rapids, MI at Michindoh Conference Center in Hillsdale, MI. This year’s theme is “The Man Eating Lion Survival Guide,” a timely topic based on I Peter 5:8. Registration is open from March 2 through May 20 at a cost of $340 per conventioneer. Check out http://prcconvention.com/ to register and find all the information you will need. You can also email pryp2015@gmail.com. Parents, encourage your young people to attend and to register soon!

You can tell the young people of the denomination are planning ahead to attend their convention by the fundraisers that abound in our churches across the country and beyond! On March 1, the host congregation at Southeast held a night of special music presented by members of their congregation with the offering to assist conventioneers.

The same type of evening occurred at Grace PRC in Standale, MI already in February, where a variety of vocal and instrumental numbers were presented to glorify our heavenly Father.

On March 7, the young people of Faith PRC, Jenison, MI sponsored a Mexican Dinner and Silent Auction in their fellowship hall with proceeds benefitting convention attendees.

The young people of Southwest PRC, Wyoming, MI held a pancake breakfast with all the trimmings to help financially those attending the convention.

In Loveland, CO the young people fixed an Italian Feast for those of the congregation wishing to partake and help their young people with convention expenses.

The YPS of Hull, IA PRC held a soup supper and bake sale along with a basketball shooting contest, where shooters could acquire prizes by making a layup, free throw, three point basket, and half-court shot, all within a minute’s time.

The YPS of Hope PRC, Redlands, CA held a French Toast breakfast for the congregation.

There was a church potluck and “delicate dessert” silent auction at Grandville, MI PRC to benefit the young people there.

Rev. Daniel Holstege, pastor at First PRC of Holland, MI had been considering the call to be the next missionary to the Republic of the Philippines. On March 8, God led Rev. Holstege to decline this call. We are thankful that God’s will was made known and we trust in the King of the church to provide another missionary in His time.

A delegation of two elders and two deacons from Southwest PRC in Wyoming, MI recently traveled to the PRCA’s Pittsburgh, PA Fellowship to oversee the Lord’s Supper there, to meet with missionary pastor Rev. Wilbur Bruinsma and the Steering Committee, and to conduct family visitation.

The Classis of the Protestant Reformed Churches in the Philippines met February 25 in the Berean PRC in Greenheights Subdivision of Mayamot, Antipolo. This Classis meets three times a year. Rev. Daniel Kleyn, who chaired the last Classis, opened with devotions and a meditation from Psalm 87:2. By rotation, Rev. John Flores, pastor of the Protestant Reformed Church of Bulacan, served as chairman of this Classis. In addition to receiving reports from the clerk and treasurer and approving their work, the Classis received and treated reports from its standing committees. These reports mainly involved presenting constitutions to Classis for their respective duties as committees—i.e., constitutions for Contact Committee, Finance Committee, Seminary Student Training, etc. The Classis also treated and approved the procedure which is to be used when churches request membership in the PRCP. This procedure will now be put into effect in treating the request of Maranatha Protestant Reformed Church in Valenzuela to join the Federation. The Classis began at 9:00 a.m. and was finished at 1:00 p.m., with this being Rev. Richard Smit’s last meeting. He bade farewell to the Classis and led in the closing prayer. As many of the men said, he will certainly be missed. The next meeting is scheduled for June 12, the Lord willing, and will be hosted by the PRC in Bulacan.

A delegation of Rev. Allen Brummel, representing the Foreign Mission Committee, and elder Jim Regnerus, representing the calling church of Doon, IA PRC will travel to the Philippine mission field in late June.

The Chinese New Year season is widely celebrated in Singapore. In 2015, the year of the goat, the dates for this occurrence were February 19 through March 5 as based on the lunar calendar. Many superstitious practices take place nationwide during this time. On the 18th people were only required to work a half day so they could then take part in reunion dinners with their families, and the 19th was declared a public holiday to visit friends and relatives. Families traditionally incorporate Yusheng, a type of raw fish salad, into their holiday menus, with the stirring and tossing of the ingredients a custom also.

In Covenant Evangelical Reformed Church, Pastor Lanning has been reminding the congregation (through sermons and writings) of the biblical imagery of goats, including the goats sacrificed on the great day of atonement. The members of CERC use this time to visit each other in various homes. They also visit their unbelieving relatives. Their weekly bulletin included this: “Pray that we may use the time of our Chinese New Year visitation this Thursday and Friday to share the gospel to our loved ones and friends who have not known the Lord Jesus Christ.”

The men of Edgerton, MN PRC hosted the annual combined Men’s Society meeting of the five Siouxland area churches on March 23, with the men from Hull, IA PRC providing the after-recess topic for discussion.

Seminary student Ryan Barnhill and his wife Miranda were blessed with the birth of a son, Nolan Ryan. We give thanks to God for the blessing of another covenant child given to their home. 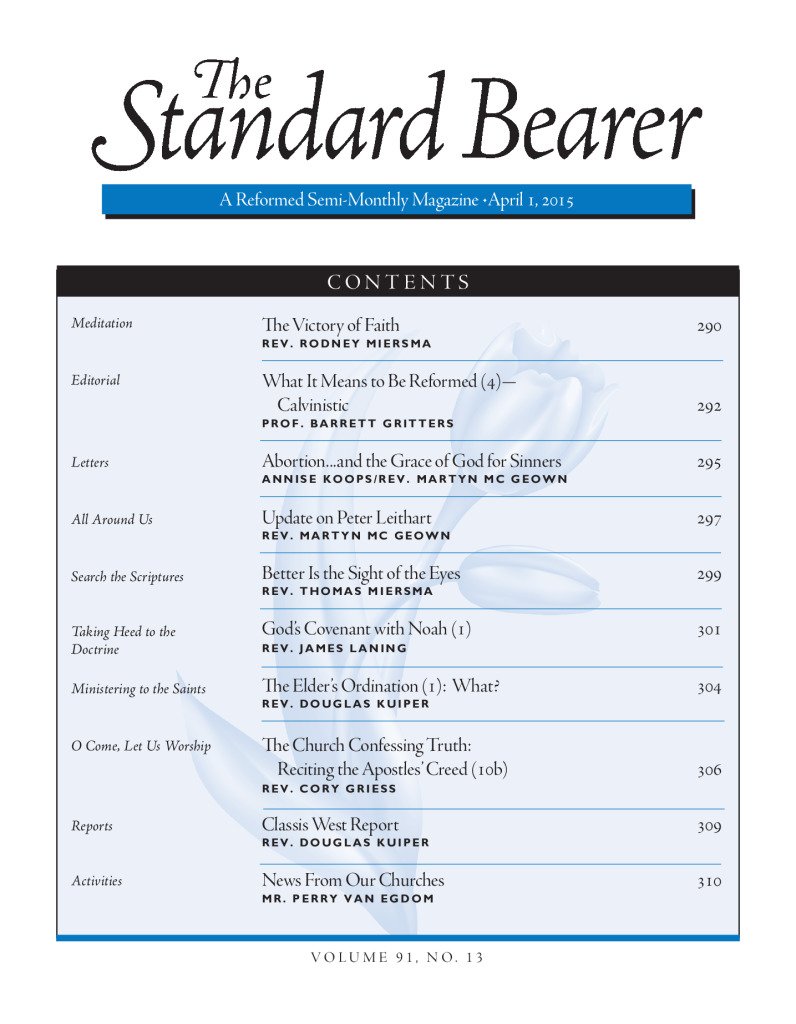