The First PRC of Holland, MI holds weekly Bible studies at the Holland Rescue Mission and every Monday evening a group of 10-12 people participate. The recent topic was: “How Do I Know I Am a Christian?” Now the discussion centers on each of the Ten Commandments with the emphasis that we obey God’s law not in order to be saved, but in thanksgiving because we are saved. These hour-long sessions meet at 7 p.m. in the lower level of the Rescue Mission and all are welcome to come!

Ladies’ League, the annual meeting of women of the Tri-state area churches was held in the Doon, IA PRC on October 28. Rev. Joshua Engelsma spoke on the topic “John Knox and Our Calling to Search the Scriptures.” A freewill offering was taken for the Trinity Christian High School kitchen, and a light lunch and fellowship followed the speech. speech.

The Covenant Christian High School choir presented a program of praise in song October 26 at the Jenison Center for the Arts, with the Hope Heralds joining them for a final song. The Covenant Choirs are also offering for purchase a new CD entitled “Be Still.”

A Reformation lecture was held October 24 on the campus of Dordt College in Sioux Center, IA. Prof. Barry Gritters presented the speech entitled, “What it Means to Be Reformed.” This address was sponsored by the Reformed Witness Committee of the area Protestant Reformed Churches. Prof. Gritter’s speech—asserting that a Reformed Church is covenantal, Calvinistic, confessional, and more—fell upon the ears of a sizeable audience that submitted follow-up questions for him to answer. Some continued an interesting discussion with the speaker over refreshments and after much of the crowd had waned. Prof. Gritters gave the same speech in the mission church at Pittsburgh (its 17th annual Reformation Day lecture) on November 7.

Also on October 24, in Loveland, CO PRC Rev. Rodney Kleyn, pastor in the Covenant of Grace PRC, Spokane, WA spoke on the “Life of Guido de Brés.” This man was a student of John Calvin and the author of the Belgic Confession of Faith. At the conclusion of the speech a Young People’s Society ice cream social fundraiser was held in the church basement. Rev. Kleyn gave the same speech on October 31 in his home congregation.

No less than six lectures took place on Reformation Day, October 31, in various Protestant Reformed churches in the USA and Canada! A grand tradition indeed, and great opportunities to bring to remembrance the workings of the Protestant Reformation.

Often church visitation occurs in the fall of the year; many visits have been made recently. Article 44 of the Church Order states the purpose of church visitation. At least two ministers shall “visit all the churches once a year and take heed whether the minister and the consistory faithfully perform the duties of their office, adhere to sound doctrine, observe in all things the adopted order, and properly promote as much as lies in them, through word and deed, the upbuilding of the congregation….” We are thankful that God also uses this means as a method of preserving the unity of the churches.

The 60th Protestant Reformed Teacher’s Convention was held October 23 and 24 at Covenant Christian High School in Grand Rapids, MI, with Protestant Reformed teachers from around the country in attendance. Rev. Nathan Decker gave the keynote address based on Zechariah 4:6: “Not by might, nor by power, but by my Spirit, saith the Lord of Hosts.” Many beneficial sectionals and round table discussions took place each day. This event is an annual, valued opportunity for the teachers in our schools to share and learn things about their vocation, as well as a time for mutual encouragement in their work. May God bless those who stand in the place of the parents and teach our children in love! Hope Protestant Reformed School is the planned site of the 2015 convention, to be held October 15 and 16.

On October 31 the third Classis of the Protestant Reformed Churches in the Philippines convened at the Protestant Reformed Church of Bulacan. Rev. Smit (president of the previous Classis) opened with devotions and Rev. Kleyn was selected to chair this meeting. Reports were rendered by the clerk, treasurer, and two standing committees. Classis received a letter from the Stated Clerk of the Synod of the PRCA expressing congratulations and encouragement in accordance with the organizing as a denomination. Classis received a request from the Maranatha PRC to join the federation. The request was placed in the hands of a committee designated to report at the next meeting of Classis on a proposed method to accomplish this. Financial items, including a subsidy request and classical assessments, were also treated. It was good to see many members of the Berean PRC and the PRC of Bulacan in attendance. The next meeting of Classis, scheduled for February 25, 2015, will be held in the Berean PRC, D.V.

Senior student Ryan Barnhill continues his internship in the Edgerton, MN PRC under Rev. Doug Kuiper and will rejoin the Seminary in January, 2015. Mr. Barnhill testifies that he is enjoying and growing in his full range of pastoral experiences. The nine second-year students are busy with their courses (Hebrew reading, New Testament Exegesis, Dogmatics, Church history, Catechetics, and Church polity) and have also begun practice preaching. What a busy time for them! It is good to remember them in your prayers before the King of the church. In addition to their normal duties, all three professors presented timely and informational Reformation lectures in various churches in our denomination. We are thankful for the faithful labors of our seminary faculty!

The calling church for the foreign mission field in the Republic of the Philippines announced a new trio from which to call a missionary. That trio consisted of: Rev. Allen Brummel (Heritage PRC, Sioux Falls, SD), Rev. William Langerak (Southeast PRC, Grand Rapids, MI), and Rev. Jonathan Mahtani (Cornerstone PRC, Dyer, IN). The congregation at Doon, IA planned to call from this trio on November 16. 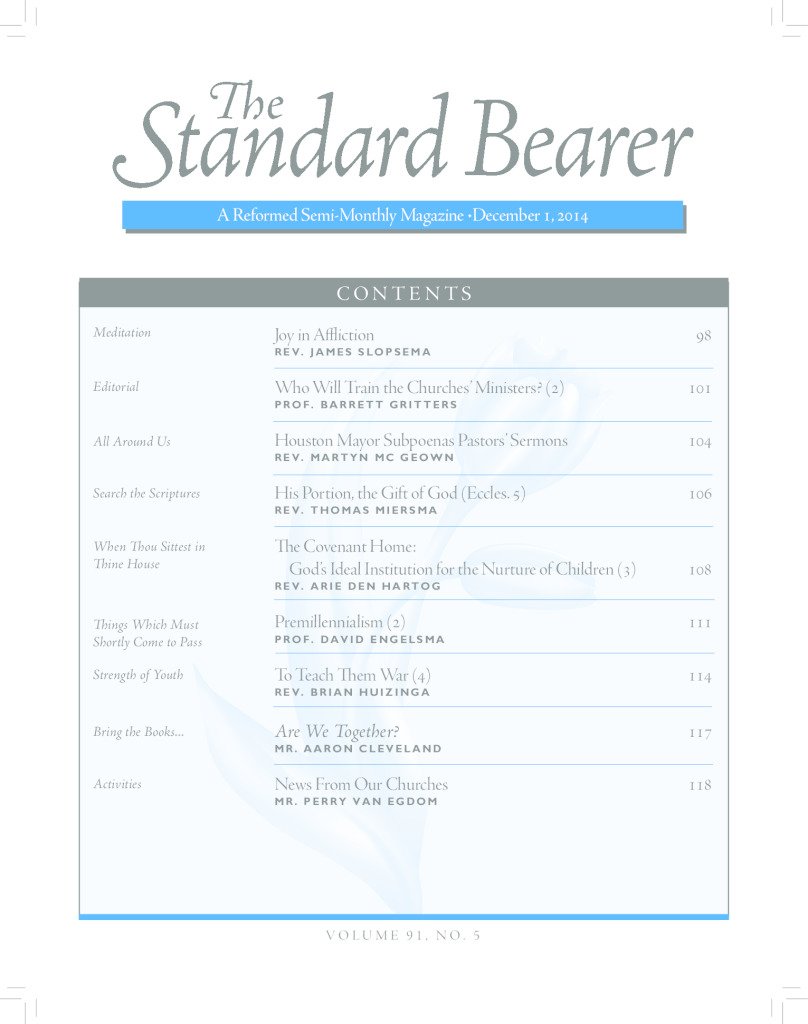