Classis East reconvened on October 15 at Grandville, MI PRC, where a committee of pre-advice presented their findings concerning four protests originally brought to Classis on September 10. Classis adopted the advice of the majority report to uphold these protests. The official Stated Clerk’s report is found elsewhere in this issue. We are thankful for the diligent labors of Classis East.

Rev. Clayton Spronk, pastor of Peace PRC, Lansing, IL had been considering the call extended to him by the congregation of Faith PRC, Jenison, MI. The King of the church has directed Rev. Spronk to accept this call, convincing him that it is his calling to take up his labors as Faith’s seventh minister. Rev. Cory Griess, pastor of Calvary PRC, Hull, IA had been considering the call to be the next missionary to the Republic of the Philippines. In Rev. Griess’ letter of decline to the calling church in Doon, IA he indicated his assurance that God’s bidding was for him to stay at Calvary PRC. We are thankful that our heavenly Father has made His will clear to Rev. Griess, and pray that God will continue to bless him in his labors in Calvary. We pray also for another missionary in God’s providence. On September 28 the Covenant Evangelical Reformed Church located in the country of Singapore officially called minister-on-loan Rev. Andrew Lanning to be their pastor. On October 19 came his acceptance of their call. With shared excitement we rejoice with the church in Singapore that God has brought them a pastor of their own! On October 16 Rev. Brian Huizinga, pastor of Hope PRC, Redlands, CA announced that he declined the call from First PRC, Grand Rapids, MI.

The annual meeting of the Reformed Free Publishing Association was held on September 25 in Grandville PRC. Rev. Clayton Spronk delivered a speech entitled “The Importance of Reading Church History.” Various reports were rendered concerning the business of the last year and board members were elected. New members were also welcomed.

The three Canadian Protestant Reformed Churches (located in Edmonton, AB, Lacombe, AB and Wingham, ON) observed the Canadian Thanksgiving Day by holding a special service on Monday morning, October 13. In 1957 the Parliament of Canada proclaimed: A Day of General Thanksgiving to Almighty God for the bountiful harvest with which Canada has been blessed—to be observed on the 2nd Monday in October.

Often church bulletins feature a “warm welcome” to visitors. Speaking with our missionaries in the Philippines in times past, we have noted that some warm welcomes are warmer than others. Though our missionaries stay warmer year around, we doubt even they could match the really, really warm welcome emanating from Hope PRC in Redlands, CA this summer. According to sources there the air temperatures exceeded 100 degrees Fahrenheit most days from late August through late September. Residents in Lacombe and Edmonton can only wonder about that. We could use flowery language like balmy or tropical…, but let’s just call it hot! Never fear, Redlands has moderated back into the “warm” category and hopes to stay there throughout the winter.

On the third Tuesday evening of each month members of the congregation at Lynden, WA meet at the Christian Health Care Center there to sing with the residents. Singing usually lasts at least a half hour, and the residents are happy to have this opportunity to listen and to sing unto the Lord, making His praise glorious!

One can become hungry by reading PRCA church bulletins. Many delicious treats were recently prepared as fundraisers by various church and school groups. Some of these included: eggrolls in Bethel PRC, a chicken dinner in Redlands, CA, Hudsonville YPS apple crisp, the Eastside Christian School Dutch banket, Hope School’s pig-in-the-blankets, apple pies in Lacombe, apple dumplings in Randolph, sub sandwiches in Edgerton and Randolph, Crete YPS taco supper, and caramel apples in Providence PRC. We are quite sure that this list is not complete. Hopefully many of you availed yourselves of these goodies!

The evangelism committee of the Calvary PRC in Hull, IA has started a “Pamphlet of the Month” program. The committee selects a pamphlet for the members of the congregation to read and to pass along to another who might be interested in or benefit from such reading. The goal is to acquaint the congregation better with our pamphlets for their spiritual benefit and as a help in their witness to others. The pamphlet for September was “The Family, Foundations are Shaking” by Prof. B. Gritters.

On Sunday, September 21, The Covenant Evangelical Reformed Church of Singapore celebrated her 27th year of existence. Sincere congratulations to her! And may God continue to bless her abundantly with faithfulness to the truth of the gospel and eagerness for His cause in that area of the world!

The synodically appointed Foreign Mission Committee of the PRCA meets the third Tuesday of each month in the Hull, IA, PRC. This committee is made up of ten members who represent the five Siouxland area churches. Many of their labors center on the work in the Philippines and in Myanmar. The FMC met most recently on October 21.

7M (Metro Manila Monthly Monday Morning Ministers’ Meeting) is going strong. However, for some time now they have met on Tuesdays to better accommodate everyone’s schedule. The Tagalog word for Tuesday is “Martes” so fortunately “7M” can still be used. Including Rev. Kleyn and Smit, there are normally seven men present at each meeting, with the location of these meetings rotating alphabetically in this order: Marikina (Provident Christian Church), Mayamot (Berean PRC), Muzon (PRC of Bulacan), and Valenzuela (Maranatha PRC). Rev. Smit is leading the men through New Testament exegesis. Then after merienda (light lunch) Rev. Kleyn leads the study of Reformed Creeds. 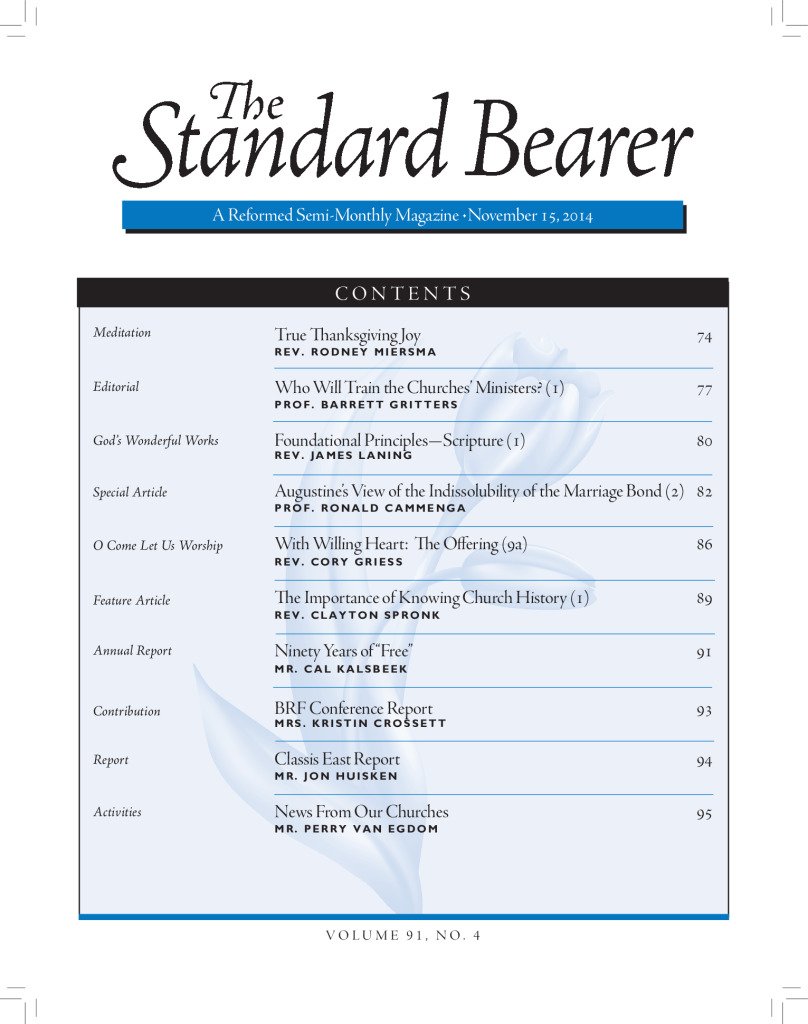