Once again this summer the Young Adult Society of the Lynden, WA PRC, with the help of their congregation, hosted their annual Young Adults Retreat on June 30 through July 3 at the Warm Beach Camp, about an hour’s drive from Lynden in Stanwood, WA. The theme of this year’s retreat was, “Wisdom: A Gift from God.” Rev. Ron Hanko, pastor in Lynden, spoke on Monday evening from God’s Word found in James 1:5, 6 on “Asking for Wisdom,” and Rev. Allen Brummel, pastor at Heritage PRC in Sioux Falls, SD, spoke Tuesday evening from Ephesians 5:15 on “Walking in Wisdom.” While activities started already the Saturday before due to retreaters coming into town that weekend, the formal retreat did not begin till Monday morning, June 30. In addition to the two speakers and discussion, highlights of the retreat included mud sliding and mud fights in the mud flats after the tide went out at Warm Beach and a boat tour of Deception Pass. The formal retreat ended after breakfast on Thursday morning, but other activities continued on for two more days. On Thursday those who remained at the retreat enjoyed white-water rafting, which was very good due to high water and raging mountain streams. Friday included a trip to Mt. Baker, where there remained 30 feet of snow, allowing the retreaters opportunity to play in and do some sledding in the snow.

As already indicated, discussion groups were held after each speech, on the subject of that particular speech, and were led by Revs. Brummel and Hanko, as well as two of the retreaters. The young men took turns opening in devotions for each meal, and two of them introduced the speeches and led in singing and opening prayer. Sixty retreaters were present from 23 different churches, including a couple of young men from a URC in Lynden and Jessica Higgs from Australia. Rev. Brummel writes that the Lynden congregation did an outstanding job hosting the retreat, even though it involved a lot of work and sacrifice for the members of the congregation. It was very encouraging for all involved. But Revs. Hanko and Brummel were especially encouraged by the spiritual maturity of the young people involved, and the good discussions they had with them. They were thrilled to see God’s covenant faithfulness in providing our churches with spiritually gifted young adults, which bodes well for the future of our churches.

The British Reformed Fellowship had its biennial conference in Scotland on Saturday, July 26 through Saturday, August 2. Prof. D. Engelsma and Prof. H. Hanko, emeriti professors of our PR Seminary, were the main speakers. Each spoke three times on the topic, “Be Ye Holy, the Reformed Doctrine of Sanctification.” The venue for this year’s gathering was the beautiful and historic Gartmore House, a magnificent eighteenth-century country mansion set in Loch Lomond and Trossachs National Park.

On May 8, the Lord in His providence led the members of the Society of the Hope Christian School in Redlands, CA to vote for the approval of adding high school grades, beginning with grade 10, in the 2017-2018 school year. The Society is planning to add a building consisting of two classrooms, restrooms, a library, and a storage room. The estimated cost for this building is $360,000. Hope Christian School currently has $100,000 in their building fund to begin this project. Hope hopes to break ground on this building project in 2016 and begin the search for a high school teacher in 2016 for the 2017-2018 school year.

On July 16 Rev. Nathan Decker and Prof. Russell Dykstra (traveling from Singapore) traveled to Brisbane, Australia on behalf of our denomination’s Contact Committee. While there, they participated in a conference on the doctrine of the covenant (July 19), led worship in the Brisbane congregation of the Evangelical Presbyterian Church of Australia (July 20), and were observers at the denomination’s presbytery meetings (July 21-24). On July 24 Rev. Decker traveled to Singapore in order to lead the worship services of the Covenant ERC on July 27, while Prof. Dykstra remained in Australia to deliver some speeches on Christian education.

Rev. Audred Spriensma and Elder Peter VanDerSchaaf left in mid-July for a visit with the Confessing Protestant-Reformed Congregation (Bekennende Evangelisch- Reformierte Gemeinde [the BERG]) in Giessen, Germany. They went as a delegation from our denomination’s Contact Committee. Plans called for time spent preaching and speaking to the students of the seminary where Dr. Jurgen Klautke teaches, and carrying on theological discussions with the men of the BERG.

The Evangelism Committee of the Randolph, WI PRC was looking for volunteers to man a booth at the Alto Fair on August 6 and 7. Those two days provided an excellent opportunity to witness to others about the gospel.

The members of the Heritage PRC in Sioux Falls, SD enjoyed a little more than their monthly fellowship dinner on July 14. In addition to that highlight, they also took part in an Evangelism Workshop on the theme: “Witnessing to the Churched.” The children of Heritage also took part by doing a craft and Bible lesson in connection with the theme.

The First PRC in Grand Rapids, MI presented a four-part marriage seminar series on four consecutive Friday nights from July 18 through August 8 entitled, “Biblical Love and the Christian Couple.” Rev. Ron Van Overloop and Rev. Garrett Eriks, along with video presentations by Paul Tripp, were featured. Rev. Van Overloop spoke on “The Foundation of Marriage” and “One-Two-Three-Four: The Hierarchy of Love,” and Rev. Eriks spoke on “Love in Marriage” and “Worshiping God as a Couple.”

Candidate Josh Engelsma received calls from Doon, IA; Faith, Jenison; and First PRC in Grand Rapids, MI to serve as their next pastor.

Rev. Steve Key considers the call to labor as missionary to the Philippines. 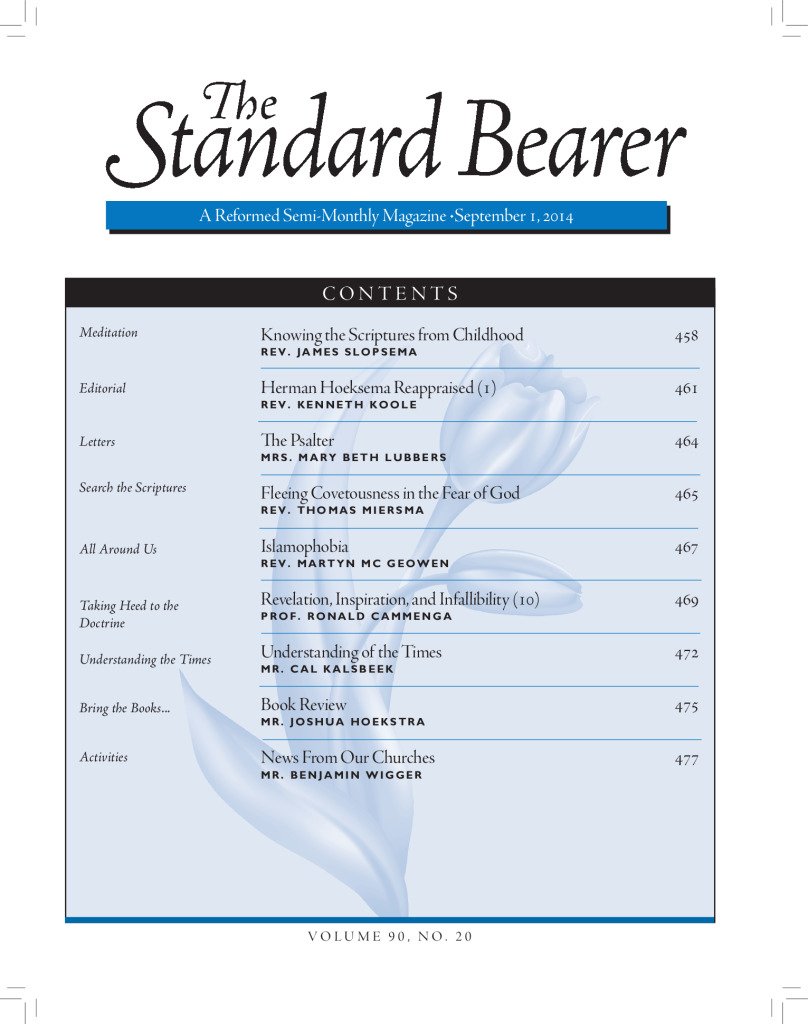