With apologies to our Wingham, Ontario PRC, we include this bit of information taken from their church bulletin of April 27. Even though it’s about three months old, the news is still interesting enough to include here.

Members of Wingham were invited to a COAH (Come Over and Help is an organization of Reformed men and women committed to spreading the gospel of Jesus Christ in Eastern Europe and the former Soviet Union) meeting. Cees Brouwer, project director of COAH, and Istvan Visky, pastor of the Hungarian Reformed Church in Romania, shared their experiences regarding the work COAH is able to do with the help of generous donations. Mr. Brouwer, who traveled this spring to Ukraine and the Baltic States, was able to answer questions regarding COAH’s activities. Rev. Visky lives and works in Romania. He is in charge of continuing education programs for children. He regularly visits the three children’s homes supported by COAH and monitors Winter help programs to poor families and elderly care programs. He also monitors the work done amongst the gypsy population.

At a recent congregational meeting, the members of the Faith PRC in Jenison, MI approved three significant proposals. The congregation voted to replace most of the lights in their building and parking lot with more efficient LED bulbs. They also voted to give Providence PRC an additional gift of $20,000 for its building fund. And they approved the purchase of a new organ for their sanctuary. The money to pay for all these expenses came from existing funds in the congregation’s building fund and general fund.

If you enjoyed an occasional game of basketball, or if you were in need of a little bodily exercise and were a member of the First PRC in Holland, MI, you were invited to play on Wednesday nights this summer in their church parking lot. Games started at 7:30, weather permitting.

The camping committee of the Immanuel PRC in Lacombe, AB, Canada invited members of the First PRC in Edmonton to join them for their annual Church Camp-out, held this summer at Deer Valley Meadows, near Alix, June 30-July 3.

The members of the Trinity PRC in Hudsonville, MI enjoyed their annual Father/son/men/boys camp-out on June 20 and 21.

The Evangelism Committee of the First PRC in Holland, MI planned to lead a Bible Study at the Holland Rescue Mission on Monday nights in July and August, with the exception of July 14. Rev. Daniel Holstege will be the primary leader, and the study will focus on passages out of Philippians.

The members of the Grace PRC in Standale, MI invited their community to join them for three summer speeches and studies on the important and timely subject of “Raising Children in the Fear of the Lord.” The nights for these three speeches were Tuesday, June 24, when Rev. Ronald Van Overloop spoke on “Christian Principles Related to the Training Up of Christian Children.” This was followed, D.V., Tuesday, July 22 when Rev. Clayton Spronk spoke on “Raising Children from 0-12 Years,” and will be followed, D.V., Tuesday, August 19, with Rev. Garrett Eriks speaking on “Raising the Teenagers.” There was also opportunity after each speech for questions and answers.

On June 18, on behalf of the Contact Committee, Prof. Russell and Carol Dykstra left Michigan for eight weeks of preaching and teaching in the Covenant Evangelical Reformed Church in Singapore, since Rev. Andrew Lanning and his family will be coming to the United States for a furlough.

Part of Prof. Dykstra’s work in Singapore included speaking four times at the annual Church Camp, held this year at Pulai Desaru Resort on June 23-26. This year’s camp had a total of 116 campers in attendance, and they had opportunity to hear Prof. Dykstra speak on the truth of God’s covenant as revealed in the Psalms.

The Young Calvinists hosted a recreational event in Kalamazoo, MI on June 21. Plans called for an afternoon and evening of games in the park, swimming, and dinner together afterwards.

Rev. James Slopsema preached his farewell sermon as pastor of the First PRC in Grand Rapids, MI on Sunday evening, June 29 and became emeritus, or retired, effective July 1. Rev. Slopsema served our churches for 40 years, the last 19 at First in Grand Rapids. For that last service on June 29, Rev. Slopsema chose to preach from God’s Word found in Acts 20:32, under the theme, “Commending the Church to God.” Rev. and Mrs. Slopsema intend to remain as members of First Church in their retirement. As churches we give thanks to Rev. Slopsema for the years of his faithful ministry and service. Thanks be to God for giving us such men of integrity and spiritual conviction. May the Slopsemas know the Lord’s continued blessing in the years ahead.

Seminarian Ryan Barnhill, along with wife, Miranda, and daughter, Mya Joy, began a six-month internship in the Edgerton, MN PRC on July 1, under the supervision of Rev. Doug Kuiper. May that internship be a spiritual benefit to Ryan and to the congregation in Edgerton and serve as a powerful means to prepare Ryan for the gospel ministry.

On July 13, congregations from three of our churches will extend calls to various pastors and one candidate to serve their members as either a pastor or missionary.

The Doon, IA PRC will call from a trio of Candidate J. Engelsma and Revs. G. Eriks and J. Marcus.

Doon will also call a missionary pastor to serve in the Philippines, from a trio of Revs. C. Griess, S. Key, and C. Spronk. 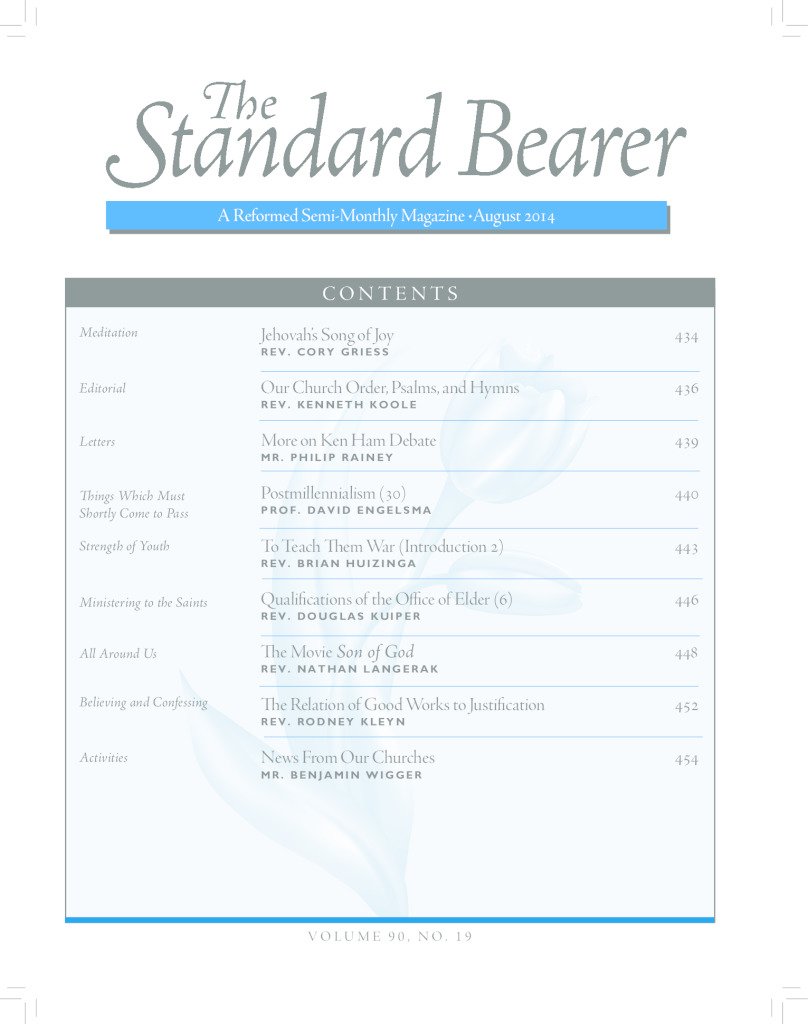