The Young Adult Society of the Loveland, CO PRC hosted their annual Young Adults’ Retreat on April 7-10 at Bear Trap Ranch, near Colorado Springs. This was the first retreat held at Bear Trap Ranch in the mountains west of Colorado Springs, where the elevation was just over 9,100 feet. There was fresh mountain snow when the young adults arrived, but the weather during the rest of the retreat was spectacular. The theme of this year’s retreat was, “God’s Sovereignty in the Life of Job.” Two of our pastors spoke on that subject. Rev. Steve Key spoke on “Job’s Life: A Powerful Illustration of God’s Sovereignty,” and Rev. Cory Griess spoke on “Living Under God’s Sovereign Way.” There were three discussions throughout the retreat on God’s sovereignty, the antithesis, and the calling of men and women of God. There were 28 young adults who attended this year’s retreat, or, according to Rev. Key, you could say 30, when you include Pastor Griess and his wife, Lael, who still fit in that age category. The young adults enjoyed some mountain hikes from the ranch, including a night hike to an area about 10,000 feet, overlooking the entire city of Colorado Springs and surrounding area. They also took an afternoon trip into Colorado Springs and visited the Olympic Training Center. The final day the group went to Manitou Springs and took the Cog Railway to the top of Pikes Peak. Rev. Griess also added that though it was not on the schedule, most of the retreaters thought free time went until 3:30 in the morning. But that too allowed for some good conversation and the development of some close friendships. It sounds like another very enjoyable and, we trust, spiritually beneficial Colorado retreat.

This year’s annual Easter Mass Meeting was hosted by the Young People of the Georgetown PRC in Hudsonville, MI, and was held Sunday afternoon, April 13. Rev. Carl Haak, pastor at Georgetown, was this year’s featured speaker. Pastor Haak spoke from Judges 14:14 with the theme, “Out of the Strong Came Forth Sweetness.” Pastor Haak applied Samson’s tearing open the lion and then the bees making honey in the carcass to Christ, taking death, guilt, and sin in His bare hands and by the cross destroying them and turning them into the sweetness of salvation. The young people in attendance enjoyed some good fellowship together with refreshments afterward.

At the request of Covenant PRC in Ballymena, Northern Ireland, the Council of the Southwest PRC in Grandville, MI released their pastor, Rev. Arie denHartog, for a three-week trip to Northern Ireland in April and early May. Pastor denHartog planned on filling the pulpit of Covenant while their pastor, Rev. Angus Stewart, and his wife, Mary, traveled to Tasmania to speak at the Family Camp of the Evangelical Presbyterian Church from April 17-21, preach at Brisbane EPC on April 27, and lecture and preach in Singapore from April 29-May 6. While in Singapore, Rev. Stewart also hoped to discuss the possibility of a sister-church relationship between Covenant PRC in Northern Ireland and the Covenant Evangelical Reformed Church in Singapore. During that same time period, Pastor denHartog was scheduled to fill the pulpit of CPRC, preaching there April 20 and May 4, and in the pulpit of the Limerick Reformed Fellowship on April 27. Pastor denHartog also planned on giving three lectures while there, April 23 on “The Importance of the Historical Adam”; April 28 in Limerick on, “Living in Perilous Times”; and May 2, again in Covenant, on “The Role of the Father in the Christian Home.”

We rejoice and give thanks to our heavenly Father for a memorable and historical day on April 9 when, under the blessing of God, the organizational and first meeting of the Protestant Reformed Churches in the Philippines (PRCP) took place. At that meeting the Berean PRC, where Pastor Vernon Ibe serves, and First PRC in Bulacan, where Pastor John Flores serves, were united together formally and officially in a special ceremony, followed by a regular business meeting. Part of that historical day included a meditation by Missionary Pastor Daniel Kleyn on I Corinthians 15:58. This was followed by the reading and signing of two different documents by all the members (minister, elders, and deacons) of the two consistories. First, the Declaration of Agreement was signed, in which was stated the basis of unity and the purpose of the PRC in the Philippines. Then the Formula of Subscription was signed. We thank God for this visible display of the unity of the church in the truth.

The Spring Ladies’ League meeting was held on April 8 in the auditorium of the Heritage PRC in Sioux Falls, SD. Rev. Allen Brummel, pastor at Heritage, spoke on Proverbs 31:30, under the theme, “The True Beauty of the Virtuous Woman.” An offering was taken for the Sioux Falls School Society and a dessert bar provided refreshments.

As reported last time, the Covenant of Grace PRC in Spokane, WA held their first service in their newly purchased church building on Sunday, April 6. Rev. Rodney Kleyn, pastor at Covenant of Grace, chose to preach from I Samuel 7:12 for that morning’s service, under the theme, “Hitherto Hath the Lord Helped Us.” Pastor Kleyn’s sermon had three points. 1—Looking Heavenward to God’s Power. 2—Looking Backward on God’s Faithfulness, and 3—Looking Forward at God’s Promises.

The Young People of Covenant of Grace also held a furniture, rummage sale at their newly acquired church on April 11 and 12 to clean out some of the extra furniture and supplies that came with the church building. The Kalamazoo, MI PRC recently started an Organ Fund, with a view to replacing their current organ, purchased in the mid 1980s. That organ has needed several repairs the last couple of years or so. Kalamazoo also learned that the one and only repairman available in southwest Michigan able to make repairs will soon be retiring, with no one to take over his business. Consequently, it seemed like the right time to consider a new organ. 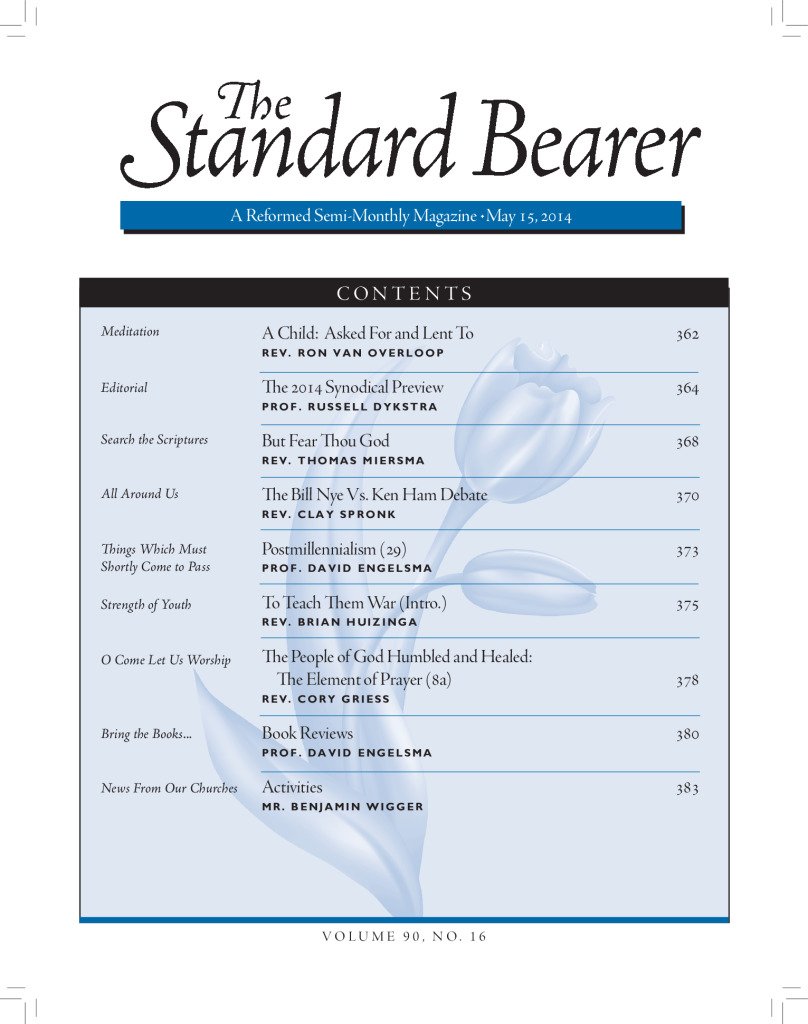