The Annual Standard Bearer staff meeting was held during the June 14 noon recess of Synod. The results of this meeting will bring little changes in the format, with all of the editors re-appointed to their present rubrics. The magazine will, the Lord willing, go forward with Prof. H.C. Hoeksema capably handling the reins as Editor-in-Chief. In addition to the regular contributions, we may look forward to regular reports from the Mission Committee and from the Theological School Committee, as well as some trans­lated reprints from yesteryear which are lost to this generation because of their original language. May it please our God to continue to privilege us clearly to set forth the Truth of His Revelation on the pages of our magazine!

The Graduation Exercises of our Seminary were held in Southeast Church June 14 under the supervision of the Synod and the Theological School Committee. Rev. G. Van Baren, president of the school committee led in the opening devotions. The Radio Choir, under the direction of Roland Petersen gave three numbers with Mrs. C. Lubbers accompanying them at the piano. Candidate Dale Kuiper was the lone graduate and his speech was on, “Present Day Relevancy of Our Creeds”. Prof. H. Hanko followed with a speech on, ‘‘The Importance of Preaching.”

The Rector, Prof. H.C. Hoeksema presented the graduate with his diploma which the Rector called a rare document; rare because relatively few receive one, rare because it represents the assimilation of rare instruction in a school which is rare now days because it is based four-squarely on the Infallible Word of God; that the document also opens the door to a rare calling-rare in the sense that it is precious: that of being Christ’s ambassador to bring His Word to His Church.

It was indeed a memorable evening for Seminarian Kuiper and his family, but also to the well-wishers gathered with him in that auditorium, as well as to our whole denomination. It was an answer to the many prayers that went up asking to send workers into the harvest. Conflicting dates prevented many of the area people from attending, but to those in attendance it was a moving experience to welcome another minister into the ranks, to be sent into one of our vacant churches—those little flocks so sorely in need of a shepherd.

The June Beacon Lights Hymnsing was held in First Church, and drew a large number of young people and their parents and friends. For a special treat the Radio Choir sang two groups of numbers. These songs were of their usual character: words from the Scrip­tures and often direct quotations therefrom, and there­fore all to the Glory of God. The last number the choir sang was that familiar rendition of the first three ver­ses of Genesis One. As village band concerts are expected to conclude with Sousa’s ‘‘Stars and Stripes Forever”, so this listener would like to hear every Radio Choir concert conclude with this grand Creation Hymn which comes to a soul-stirring climax with the choir in full voice singing, “and there was LIGHT!”

Rev. Harbach had a “very enjoyable experience” before the school year ended by being invited by the instructor of Reformed Doctrine in the Kalamazoo Christian High School to take over the morning and afternoon classes in order to present the Protestant Reformed position of the Doctrine of Grace. This he did, as was expected of him, antithetically to the three points of “Common Grace”, and was handled in discussion-and-debate style, answering questions and arguments from the members of the classes. Rev. Harbach says it was again revealed to him that God’s answer to man is not philosophy, no matter how cleverly set forth in a Reformed framework, but plain Scripture—as laid down both in holy writ and in our Reformed Confessions.

Rev. C. Hanko, while in Grand Rapids as a Synodical delegate, was privileged to preach in First Church Sunday morning, and he preached a sermon before delivered to the Jamaicans while in their Island. The text: “Come unto me all ye that labor….”, which served admirably as the basis for a “preparatory sermon,” for which it was intended. The evening service, in which Rev. Hanko was scheduled to preach, was cancelled because of a “tornado warning”, one of many that are on the increase as the Day of the Lord draws nigh.

A joint committee from Hull, Edgerton and Doon are co-operating in a venture to sponsor a lecture series in their community next Fall and Winter under the supervision of the Mission Board of our churches.

Oak Lawn’s congregation is celebrating their 40th anniversary June 19 and has secured Rev. C. Hanko, one of their former ministers, to give a speech on the program which has been planned to commemorate the event. Rev. and Mrs. Hanko will then be in Oak Lawn on their way home after having visited their children in Grand Rapids while Rev. Hanko attended Synod.

Commencement Exercises of the Loveland Protest­ant Reformed Christian School featured Rev. D. Engel­sma as speaker whose address was titled, “Faithful to His Covenant,” Rev. Engelsma was also the Com­mencement speaker at South Holland’s school excercises June 12 when he spoke on, “The Armor of God.” 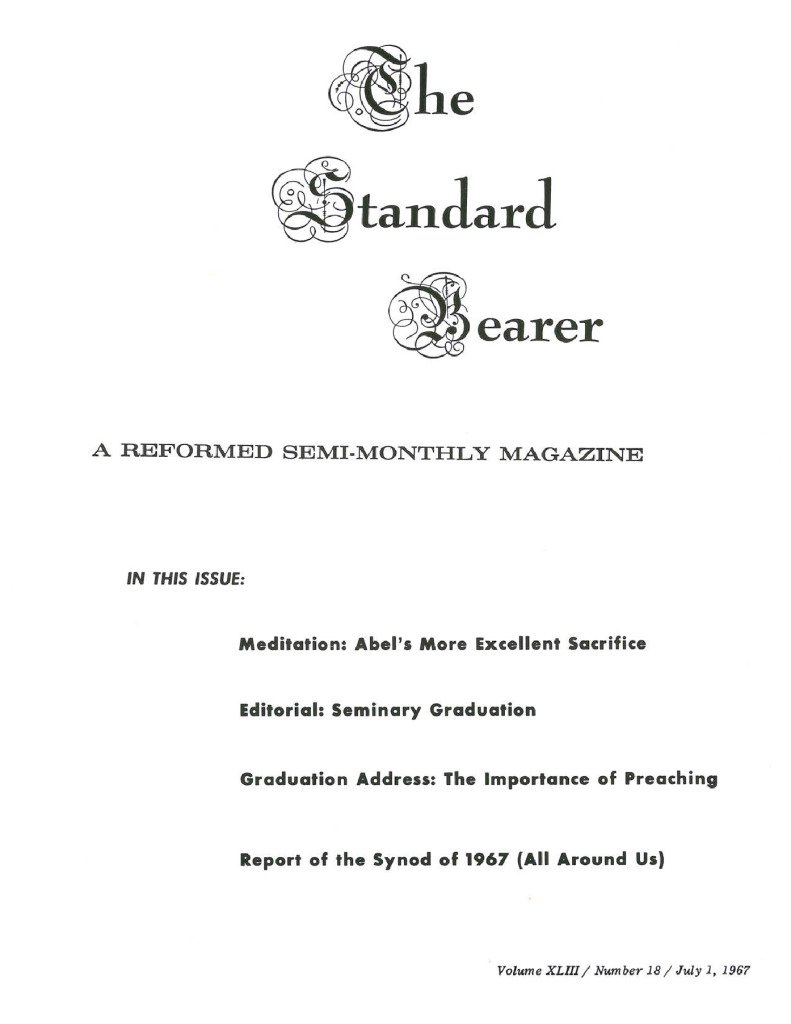