With the Word of God found in I Corinthians 12:12 in mind, “For as the body is one and hath many members…,” we extend our congratulations to the First PRC of Edmonton, AB, Canada, celebrating their anniversary as an organized church on September 25, 1975.

The congregation of the Hope PRC in Redlands, CA was invited to a Chili Cook-off fundraiser on Saturday, August 17. The idea, of course, was to enjoy an afternoon of homemade chili and vote on your favorite one. There were sign-up sheets for those who would like to enter their chili into the contest, and for those willing to bring salads, but, strangely, no sign up sheet for those willing to bring water or soft drinks to help cool the mouths and throats of the chili testers. The money raised was donated to Hope’s church-improvement fund.

The Cornerstone PRC in Dyer, IN was scheduled to hold their yearly church picnic on Saturday, August 24, at the home of one of their members on the shore of Lake Michigan. What made this picnic somewhat unusual was that Cornerstone expected somewhere between 250 and 300 people to show up. A quick look at our 2013 Yearbook shows Cornerstone hav­ing a congregation of 143 members. That’s a few extra visitors! In case of rain that Saturday, all the guests were invited to remain and simply move the picnic indoors! That must be some picnic and some house.

We are writing this “News” just a couple of days after this summer’s annual Young People’s Convention. This year’s convention was hosted by the Crete, IL PRC and held in beautiful southern Illinois at the Lake Williamson Christian Center in Carlinville, IL. From what we have heard, this year’s conven­tion, held August 12 through 16, was a tremendous success. Four hundred forty-three young people were registered to attend, so, taking into account all the chaperones and support people from Crete, there had to be around 500 at this year’s convention. Rev. Nathan Langerak, Rev. Cory Griess, and Rev. Jonathon Mahtani spoke on the theme, “Not Ashamed of the Gospel,” from Ro­mans 1:16. By our count, this was our churches’ 72nd convention and the 9th hosted by Crete. We add our prayer, along with those of all our members, when we pray that this time together may have been used in a powerful way for the spiri­tual growth of our young people and for the forming of strong bonds in Christ with each other.

The Young People of the Grace PRC in Standale, MI planned, in their words, a spectacular car wash and bake sale for August 3 at Hope PR Christian School in nearby Walker, MI. Money raised that morning was a start toward the covering of anticipated expenses for next year’s convention in Redlands, CA.

There was a special thank-you from the young people of the Hull, IA PRC for the support they re­ceived from their congregation in a recent pop-can drive. They man­aged to raise $588 for next year’s convention. Since Iowa’s return deposit on pop cans is 5 cents a can, that’s a lot of cans to return.

The first annual meeting of the Society for PR Education took place on July 22 at Heritage PRC in Sioux Falls, SD. New members were encouraged to attend.

The annual Northwest Iowa PR School kick-off camping out­ing at Newton Hills State Park was Thursday and Friday, Au­gust 8 and 9. All the friends of Northwest were also invited to join the campers on Friday night for a Family Picnic. Supper was pot provision, followed by a group sing-along around the campfire. Everyone was reminded to bring camping chairs, a flashlight, and a Psalter.

The members of the Hope foun­dation of the Hope PR Christian School in Walker, MI were very pleased with how their 1st annual Bass Fishing Tournament went. This tournament was held on Sat­urday, July 20, from 7 a.m. until noon, on Muskegon Lake, about an hour north and west of Grand Rapids, MI. The weather was great, the home-cooked meal served at noon was delicious, a lot of fish were caught, and a good time was had by all—so much so, that all the fishermen that the organizers talked to expressed a desire to come back again next year, taking more of their fishing buddies with them. This year’s tournament had a total of 12 boats entered, and approximately 45 fishermen, both young and old, were entered. Most boats had fishermen who were 12 years old or younger. Almost all teams caught at least 20 fish, with each team weigh­ing in their top five legal bass. The biggest fish was 4.25 pounds, and it was caught by a 12-year old. After receiving many positive reviews, the Hope Foundation plans to hold the event again next year.

In August of this year, the

Fundraisers of Heritage Christian School in Hudsonville, MI took on what, without a doubt, was their most ambitious project to date. Those ladies of Heritage took on the challenge of running a full-ser­vice restaurant at the Hudsonville Community Fair for six days, from August 19-28, serving breakfast, lunch, dinner, and desserts, from 7 a.m. until 10 p.m. What a massive undertaking! The “News” cannot say enough about the Committee who made it all happen. If you were looking to start a restaurant, you would do well to hire any of these ladies. But, of course, a project this size needs more than six ladies to make it successful. The fundraiser anticipated at least 170 eight-hour shifts that needed to be filled that week. In addition, they also provided a list of a variety of items that could be donated (1,900 hamburger patties anyone?). But then, at the very least, if you could not donate your time or perhaps some needed food items, you could always show your support for Heritage by eating a meal or two at the Fair.

We rejoice with Rev. Daniel and Leah Holstege, of the First PRC in Holland, MI, in the birth of twin daughters, Kirsten Leigh and Kiley Danielle, born on August 9. 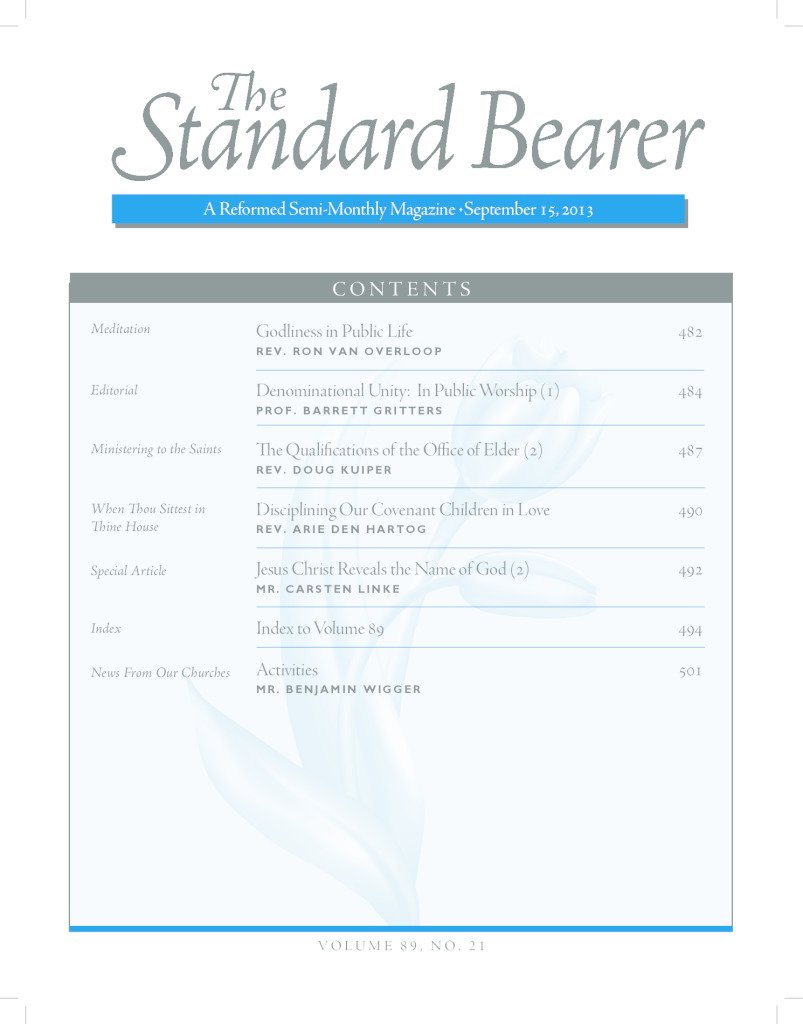