The congregation of Edgerton has called Rev. Van Baren, from a trio which included also Rev. Heys and Rev. Moore. Rev. Harbach was installed as Home Missionary on May 8, in Hope Church. Rev. Van Overloop preached the sermon and Rev. C. Hanko read the “Form of Ordination of Missionaries.” Rev. and Mrs. Veldman, as you probably recall, spent the four Sundays of April in Maine. The May 5 bulletin carried the following note from Southwest’s pastor, on his return to Grand Rapids: “Needless to say, the pastor and his wife are happy to be back with you today. Although only a few thus far attended most of the services (in Maine), the last Sunday morning there were three new faces from the Skowhegan area and nine came from afar. Maybe it would be a good experience for each of us to sit on a folding chair in an old building with a few, craving for the Truth.”

From various bulletins comes news concerning building projects which are afoot in a number of our churches. Faith’s congregation, for example, has approved plans for “the development of our property in three phases (the first a parsonage and the second and third a sanctuary).” The church services of this young congregation, incidentally, are currently being held in the Jenison Christian Junior High building; the Adult Bible Class, as well as the consistory and deacons meetings, are held in the Union Bank Building, Jenison; and the catechism classes are held in the home of deacon Frank Block.

From a Randolph bulletin we learn that Forbes’ congregation has “purchased a mobile home and intend to build an addition for more space” in order to provide adequate housing for the new pastor. They plan, according to the bulletin announcement, to do the work themselves in order to keep the cost down.

There’s some do-it-yourself work connected with the construction of Randolph’s new church building, too. An April 14 bulletin of that congregation suggested that “anyone who is willing to help with the painting and cleaning of the new church please be there tomorrow evening.” Dedication of the new building was set for Friday, May 24.

A project of a little different sort will, if things go according to plan, be undertaken in Doon. An item in Doon’s April 14 bulletin noted the following: “Our School Board notifies our congregation, and in particular our School Society, that the Society has passed a proposal in their recent meeting to add a third full-time teacher. This means that a third room will have to be prepared for teaching, and a drive will be conducted soon to offset this expense.”

In reading the bulletins which have come from the western churches during the past weeks, one cannot help but be impressed by what might be called a kind of interchurch cooperation in connection with some of those building projects. South Holland and Hull, for example, both announced a collection for Forbes, to “help pay for a house trailer which was purchased for Rev. Mark Hoeksema.” Hull pointed out that “they are small in number” and are therefore “much in need of assistance from our sister congregations.” Similar assistance to Forbes came from the Randolph congregation which (and here’s the interesting part) had, several weeks earlier, received a gift collection for their own Building Fund from (you guessed it) Forbes, North Dakota. Assistance of a different kind came to Forbes from Isabel. Rev. Miersma, Mr. Ephraim Reichert, and Mr. Emil Streyle traveled to Forbes . . . with their hammers. If we can judge at all by reports concerning the quality of that assistance, it appears that Rev. Miersma’s talents are not-limited to the pulpit.

Another kind of interchurch relationship was reported in a recent South Holland bulletin. On Friday, April 26, there was to be a combined meeting of the Young People’s Societies of South Holland and Randolph. That’s quite a trip for the young people of Randolph! And on the following Thursday evening, South Holland played host to the Covenant Christian High School Choir from Grand Rapids.

A couple of interesting little items, yet, from Isabel’s bulletins:

Members of the congregation were invited to the home of one of its members after the evening service on March 10, in order to listen to the tape of the Seminary Dedication.

And, from the April 7 bulletin, we lift the following special notice, concerning this congregation’s church extension efforts: “The opportunity that we have been waiting for has finally come. A radio station has been found that will broadcast the thirteen 15-minute programs made by Rev. Engelsma. Starting next week Sunday afternoon at 4:10 P.M. they can be heard over KBHB Radio, Sturgis, 810 on your dial. To defray the expenses of this broadcast a special collection will be taken once a month.” 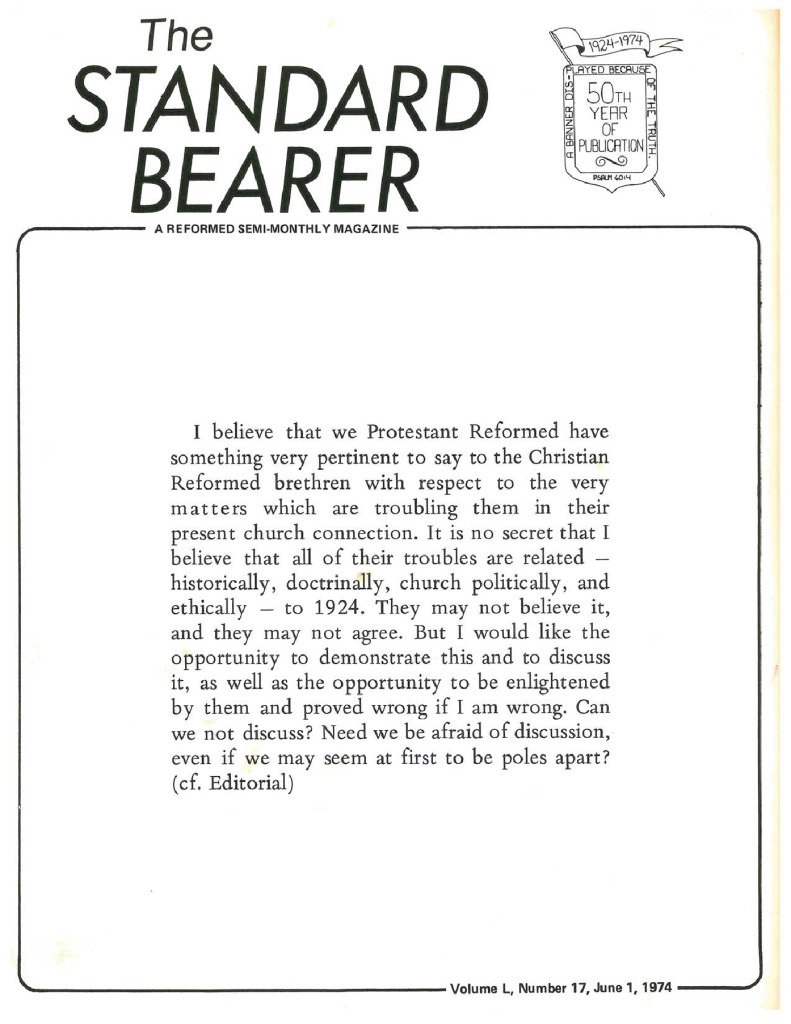