Rev. G. Lanting preached his farewell sermon in Edgerton on Sunday, May .26. On the 29th he moved to Colorado, and on the 30th he was installed as pastor of the Loveland congregation. Isabel’s pastor, Rev. Miersma, who was Loveland’s moderator during her vacancy, conducted the worship service and installation.

After Rev. Van Baren declined the call from Edgerton, the consistory there formed a new trio consisting of the Revs. Heys, Lubbers, and Kortering. The calI was extended to Rev. Kortering.

And, from a trio consisting of Rev. Kortering, Rev. Kuiper, and Rev. Miersma, Prospect Park elected to call Rev. Miersma.

Southwest’s congregation, at a meeting held on June 10, approved a “proposal from the Council regarding the paving of the parking lots,” in order to meet city regulations. In addition they voted approval of the Council’s proposal that a committee be appointed to study the possibility and feasibility of relocating and rebuilding.

Several of the members of Southeast’s congregation have been busy recently with some work in their church building. The work included the finishing of the organ loft, redecoration in the basement, and the effecting of a change in the pulpit lighting. The result of the latter change is that, “instead of shining on the light-colored walls, the light will come down on the pulpit, making it easier on your eyes to look in the pulpit direction.”

According to its June 2 bulletin, Southeast has acquired a new Allen organ. “The organ has sixteen speakers which have been placed in the speaker areas on both sides of the pulpit . . . The instrument is capable of producing tones most comparable to that of a pipe organ. We trust you will be pleased,” the announcement continued, “with this beautiful addition to our church auditorium.”

And then, keeping the new purchase in proper perspective, Rev. Schipper added that, “It is well to remember, however, that this beautiful instrument cannot of itself lift one note of praise to God. It is the inspired playing of dedicated organists, and the voices of a Spirit-filled congregation that can extol the virtues of the God of our salvation. Let us therefore not rejoice in things, but in the Giver of all good and perfect gifts!”

The graduation exercises of seminarians Arie Den Hartog and James Slopsema were held on Wednesday evening, June 12, in Hope Church. The commencement speaker noted that they were the first graduates of our seminary to receive diplomas bearing a Grandville, rather than a Grand Rapids, Michigan address.

I’m sure that the sentiments expressed by the writer of Southwest’s bulletin, concerning the graduation of Mr. Slopsema, are shared by all of us, for both of the graduates. Congratulations “for having successfully completed Seminary is hereby extended, along with our prayers that the King of the Church may soon call (them) to labor in the vineyard of His choice.” Candidate Slopsema, incidentally, plans to spend the summer in Edgerton, and Candidate Den Hartog in Prospect Park.

On Friday, June 14, the ministers and their wives spent a day of well-deserved rest and relaxation at Camp Manitou-Lin. The day began with a discussion of Phil. 2:1-11, after which the minister’s wives enjoyed a presentation by Mrs. Hoeksema, on the teaching of Bible to children, and, the ministers attended a demonstration by Rev. Van Baren, on the use of the overhead projector as a teaching tool for catechetical instruction.

The remainder of the day was intended, no doubt, as a time to “unwind” after more than a week of concentrated effort at Synod. Activities included swimming, canoeing, and valiant attempts at handling kayaks, which were “rather tippy, so that we didn’t stay all that dry.” Difficulties encountered in handling the kayaks, however, were not the only cause for wet clothing. Prof. Decker, we understand, was drenched by “what was more like a tidal wave” coming off the paddle of, would you believe, his wife.’ The day ended, as it began, on a serious note, with psalter-singing around a campfire.

Bulletins from Randolph took on a different appearance, beginning on Sunday, May 19. Not only were its covers, for the first time, in printed form, but it included also a picture of the church building. And the mimeographed type on the inside included a reminder concerning the Dedication Service for the new building. “Let us prepare,” advised the writer, “to dedicate our new building in thankfulness to God and to the glory of His holy name.” Open House was held in the afternoon of May 24, and, at the evening service, Rev. C. Hanko delivered the dedicatory message.

The fo1lowing week, incidentally, Randolph’s pastor, Rev. W. Bekkering, left for Maine, having been released by his consistory in order that he might preach in Skowhegan for the first four Sundays in June. 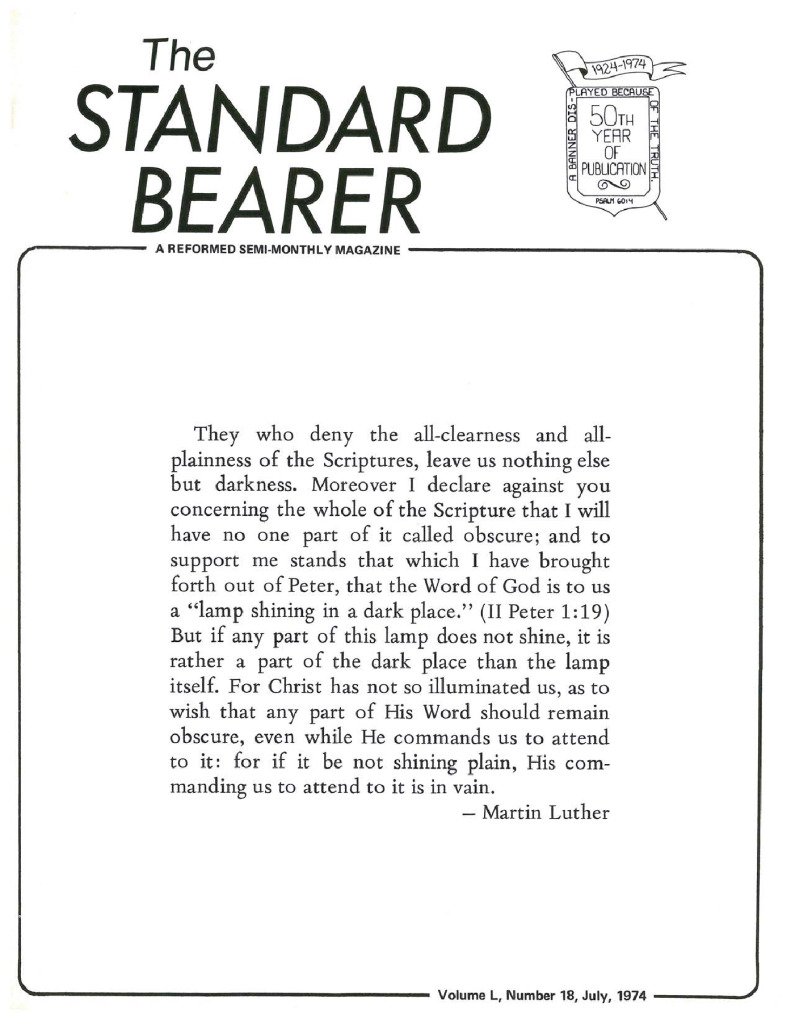