New from our churches

New from our churches

With the engagement of Pastor-elect Jon Langerak to Sarah Kleyn, daughter of Rev. Rodney Kleyn, this event spurred a reader to ask: How many daughters of ministers are married to Protestant Reformed ministers themselves? An interesting question indeed, and one that we attempt to answer later in this column.

The quiet, meandering streams called the Rock River and the Little Rock River in northwest Iowa became swelling, raging torrents of water under the hand of the King of the earth in June. Approximately 11 inches of rain fell in as many days, inundating the roads and some homes of the congregations there. The compromised conditions led to the derailment of 32 cars of a Burlington Northern oil tanker train just a mile south of Doon, Iowa. Crews worked day and night to restore rail traffic within three days and recover spilled oil from 14 leaking railcars. The flooding reminded area residents of the 2014 “hundred-year flood.” Now the waters have receded again in God’s plan. But not until we once again witnessed His Almighty power!

The Synod of Dordt held its first meeting on November 13, 1618. Crete PRC invites you to commemorate the 400th anniversary of this great event in church history by attending a special lecture given by Professor D. Kuiper on Wednesday, October 31, 2018.

The Reformed Witness Hour has a new, updated website. Visit reformedwitnesshour.org to watch an introductory video, view pictures and audio from the broadcast’s history, and read and listen to almost twen­ty years of past radio broadcasts. Now is an excellent time to become familiar with this important Reformed radio/Internet ministry.

The Cornerstone PRC Word and Deed committee has partnered with the Reformed Witness Hour to air her sermons and the RWH messages on the radio in the Chicago area. The broadcast can be heard every Sun­day at 4:00 p.m. on WYLL 1160AM or on the Internet at www.1160hope.com.

Hope School Foundation Bass Fishing Tournament is scheduled for Saturday morning August 18th at 7:00 a.m. at Fisherman’s Landing on Muskegon Lake. Sponsor a boat, bring the kids, and enjoy a great morning out on the water! Be sure to try a Shim-E- Stick worm, hooked in the middle. The ones permeated with salt work best.

The PRC A now has an official sister-church relationship with the PRC in the Philippines (PRCP), confirmed at this year’s synod! We rejoice in this evidence of the Lord’s blessing on the work in the Philippines and of the unity of Christ’s church, which He gathers from all nations, tribes, and tongues. May the Lord grant us a mutually edifying and God-honoring relationship.

We are told that Rev. Leovy Trinidad, pastor in Maranatha PRC in the Philippines very much enjoyed his travels to the USA and the meeting of synod of the PRCA. As he excitedly told acquaintances back home about his trip, he referred to being in “the land of the giants.”

Rev. Daniel Holstege and family, at the time of this writing, are in the middle of their six-week fur­lough to the USA. One stop was in Doon, IA, where he preached in the congregation of the calling church there. A presentation was given in Calvary PRC of Hull on July 1. Rev. Holstege was also able to meet with the Philippine sub-committee of the Doon Coun­cil and enjoy a delicious meal at the Doon Steakhouse! From Doon, the Holsteges headed back to Michigan and then on to Colorado before returning to the labors in the Manila area.

Pastor Arie and Sherry denHartog left the CERC of Singapore on July 16 after about six months of labors there. A farewell dinner was held for the denHartogs in the church. Prof. and Carol Dykstra arrived there on July 19, with plans to depart again for the USA on August 21.

The Lynden, WA PRC is planning a Young Adults Retreat to be held July 1-5, 2019 in beautiful northwest Washington! All post high young adults are welcome and future announcements are forthcoming.

As far as we are aware the following seven pastor’s daughters themselves married PR ministers:

Perhaps we have missed one? If so, let us know. 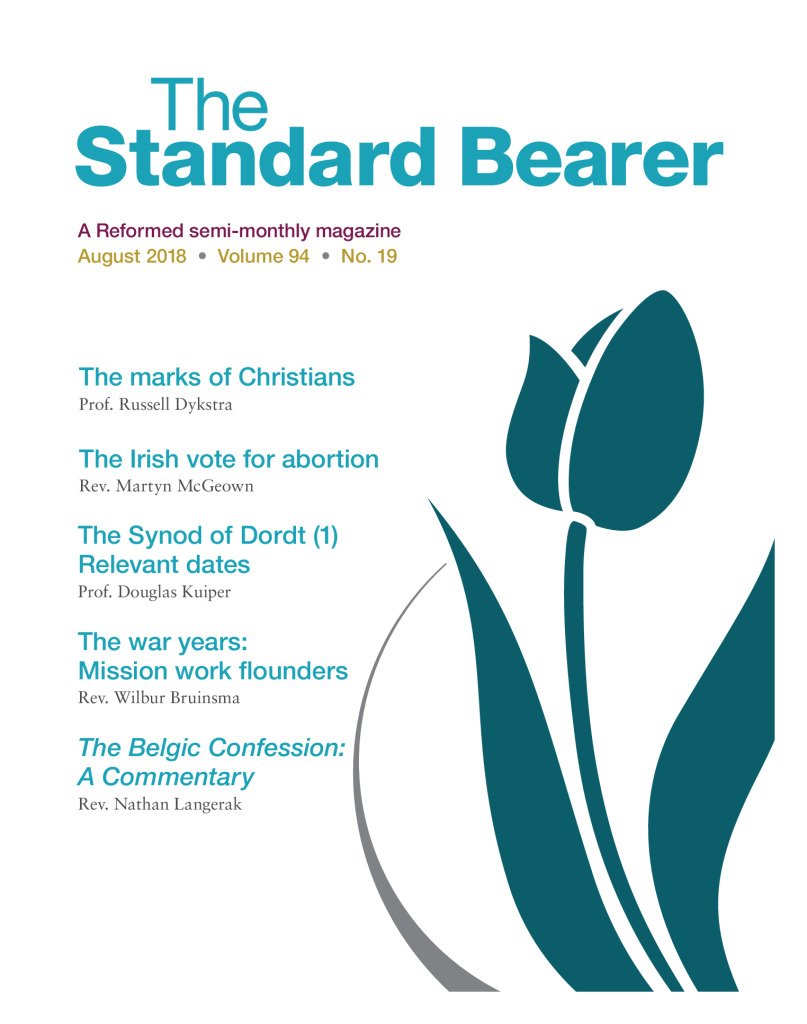