Nebuchadnezzar a Child of God?

Nebuchadnezzar a Child of God?

From the Men’s Society of our Edgerton Protestant Reformed Church and its secretary, Gerald Kuiper, come the following question:

“In our discussion of the book of Daniel in our Men’s Society we came to the problems of whether Nebuchadnezzar truly believed in his heart that God was above all, whether he really ‘praised and extolled’ God from his heart, and whether he was a child of God. The problem arose from the fact that verses 34-37 of Chapter 4 sound ‘pretty good’ to some of us, especially since there is nothing else said about Nebuchadnezzar, except Daniel 5:18-23. “We request then, that you answer our question in The Standard Bearer . . . . . The main question, of course, is whether Nebuchadnezzar was a child of God.”

For the reader’s convenience, let me give the background of this question as well as the contents of the verses mentioned.

In Daniel 4 is recorded Nebuchadnezzar’s dream of the great tree that was hewn down so that only the stump of its roots were left in the earth. This dream is interpreted by Daniel with application to the king. The heart of that interpretation is in vss. 24-26: “This is the interpretation, O king, and this is the decree of the most High, which is come upon my lord the king: That they shall drive thee from men, and thy dwelling shall be with the beasts of the field, and they shall make thee to eat grass as oxen, and they shall wet thee with the dew of heaven, and seven times shall pass over thee, till thou know that the most High ruleth in the kingdom of men, and giveth it to whomsoever he will. And whereas they commanded to leave the stump of the tree roots; thy kingdom shall be sure unto thee, after that thou shalt have known that the heavens do rule.” This prophecy was fulfilled upon the king, “and he was driven from men, and did eat grass as oxen, and his body was wet with the dew of heaven, till his hairs were grown like eagles’ feathers, and his nails like birds’ claws.” Then follows the passage which gave rise to the question under consideration: “And at the end of the days I Nebuchadnezzar lifted up mine eyes unto heaven, and mine understanding returned unto me, and I blessed the most High, and I praised and honored him that liveth for ever, whose dominion is an everlasting dominion, and his kingdom is from generation to generation: And all the inhabitants of the earth are reputed as nothing: and he doeth according to his will in the army of heaven, and among the inhabitants of the earth: and none can stay his hand, or say unto him, What doest thou? At the same time my reason returned unto me; and for the glory of my kingdom, mine honour and brightness returned unto me; and my counselors and my lords sought unto me; and I was established in my kingdom, and excellent majesty was added unto me. Now I Nebuchadnezzar praise and extol and honour the King of heaven, all whose works are truth, and his ways judgment: and those that walk in pride he is able to abase.”

The passage from Daniel 5 is in the context of the handwriting on the wall that came to Belshazzar at his drunken. feast. Daniel here recounts the history of Nebuchadnezzar’s abasement in order to accuse Belshazzar of gross pride. No new information about Nebuchadnezzar is added in this passage. In fact, after Chapter 4 no more history of Nebuchadnezzar is given us in Daniel. Significant about the passage in Chapter 5, I think, is the fact that once more it is stated that this judgment came on Nebuchadnezzar “till he knew that the most high God ruled in the kingdom of men, and that he appointeth over it whomsoever he will.”

I must confess that this question never occurred to me before, but that I simply took the position that Nebuchadnezzar was certainly not a child of God. In studying the question, I have not changed my opinion on that score, but have been strengthened in it. Evidently the question was occasioned by the amazing and clear and emphatic language of this “confession” of Nebuchadnezzar. This same language has caused some good commentators to disagree also, so that some take the position that Nebuchadnezzar was truly regenerated and converted. The men of Edgerton, therefore, may console themselves that they are not the first, and probably will not be the last, to wrestle with this question.

I would prefer to explain this very clear acknowledgement of Nebuchadnezzar from the fact that the Lord compelled the proud and wicked and (do not forget) antichristian king to acknowledge, in spite of himself, God’s absolute sovereignty and dominion and the absolute sway of God’s kingdom over the kingdom of Nebuchadnezzar, and, in fact, over all the kingdoms and inhabitants of the earth. In this connection, I present the following considerations:

1. Nebuchadnezzar personally was “the head of gold” in the dream-image of Daniel 2 which represents the antichristian world-power, which shall be broken in pieces by “the stone cut out of the mountain without hands.” To me it is unthinkable that this antichristian “head of gold” was nevertheless a regenerated child of God.

2. Nebuchadnezzar made similar admissions on other occasions, after which it became plain that he was not a child of God. Cf. Daniel 2:47 and especially Daniel 3:28.

3. Such language comes from the mouth of wicked kings more frequently. Think of Pharaoh’s admissions in Exodus 9:27, and Exodus 10:16, 17. Think, too, of the language of Cyrus’s decree in Ezra 1. All such language does not imply faith and regeneration, but simply means that the wicked, to their own condemnation, must acknowledge that God is GOD.

4. Not only is ‘there no personal confession of sin and of trust in the Lord in the king’s acknowledgement, but one can still detect a good deal of “I” in the king’s account. Moreover, there is absolutely no evidence that this “confession” was followed by a life of conversion. For example, would not a converted king have ended the captivity of God’s people? And would he not have instituted radical reform in his own kingdom?

5. What took place in Nebuchadnezzar is quite consistent with the purpose twice stated by Daniel: “till thou know that the most High ruleth in the kingdom of men, and giveth it to whomsoever he will.” In undeniable fashion the Lord had caused Nebuchadnezzar to know this; and in unmistakable language Nebuchadnezzar, though he hates God and opposes God’s everlasting kingdom, must acknowledge this. Only then is his kingdom restored.

6. The result is: a) That the wicked, antichristian king stands condemned out of his own mouth. b) That God’s persecuted people in the midst of an antichristian kingdom may take comfort from the fact that even the wicked world-power must acknowledge that the Most High, Who is their God, ruleth. c) That God is glorified not only in the salvation of His people but also in the judgment and condemnation of the anti- Christian power. Ultimately, every knee shall bow, and every tongue shall confess that Jesus Christ is Lord, to the glory of God the Father. 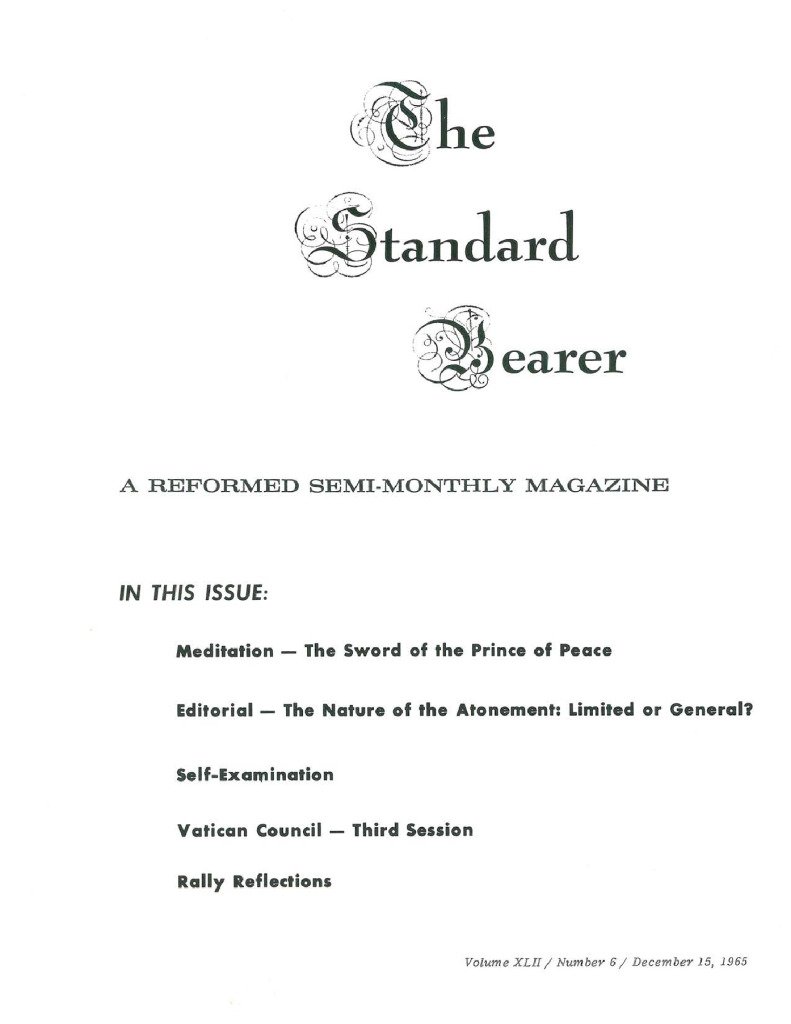