Verily, verily, I say unto thee, Except a man be born again, he cannot see the kingdom of God. John 3:3

God is a logical God. He cannot lie (Numbers 23:19); and therefore He cannot deny or contradict Himself, which is the foundation for the basic principle underlying all true logic. And because of it, God’s revelation to us, the Bible, can be relied upon and understood. We can exegete it, which is to say, we can glean from it truths which can be received with certainty, knowing that what God says at one point, He will not contradict at another. This provides the basic guideline by which a true interpretation of Scripture can be established, and distinguished from that which is false.

The rule goes in effect like this: an individual passage of Scripture is interpreted by all of the rest of Scripture—which is to say, an interpretation of a particular passage of the Bible can be accepted as true only when it is in harmony with, and seen in the light of, all of the rest of the Scriptures. This rule is implicit in what Jesus said in John 10:35, “The scripture cannot be broken.” With this rule in hand the church of God has been able to elicit from the Bible those basic doctrines which form the foundation of the Christian faith, and which we now find set forth in the historic creeds of Christianity. God is a logical God; and upon this fact the church of God is built.

But this does not mean that with nothing more than logic one can arrive at truth, either from the Bible or anywhere else. It simply is not so, and for a number of reasons.

We have a striking example of this with Moses on Mt. Sinai, following Israel’s great sin. Moses was struggling with a problem; how could God both insist that this sin of Israel had to be punished (Ex. 32:33), and at the same time promise to send His angel to lead them into the promised land (Ex. 32:34)? And so it was finally, after struggling back and forth with this problem, that Moses exclaimed, “I beseech thee, show me thy glory” (Ex. 33:18)—to which the Lord replied, “Thou canst not see my face: for there shall no man see me, and live” (Ex. 33:20). God would not, and could not, reveal to Moses everything about himself and his will; but this much He would do: “I will make all my goodness pass before thee, and I will proclaim the name of the Loan before thee; and will be gracious to whom I will be gracious, and will show mercy on whom I will show mercy” (Ex. 33:19). In effect, God was saying that He would reveal to Moses as much as Moses was able to receive, which in this instance was the fact of election, that God shows mercy to whom He has chosen to do so. With this Moses had to be satisfied, even though there was much more he might wish to know- even as to this day there are many questions about election to which we are given no answers either, such as, who are the elect, and why God has chosen some and not others, or how can sin have come to be without God being its author. The fact of these things He has told us; but the details He has not made known.

This is true in other areas as well. God is God; and we are but creatures. God is infinite, with a complete knowledge of all things; while we are creatures who cannot go beyond the limits within which He created us. It is something that every good theologian must recognize. We may and should deal with what God has revealed, but beyond that we should not seek to tread. We should deal with what is given in an orderly and systematic way (I Cor. 14:40); but we will never be able to fill in all the gaps, and there will always remain questions to which we are given no answers. We must use what God has given, and with that we must stop.

There is more. God has made us complex organisms, not just physically, but also spiritually; and our intellect is only part of that. Man has been given not just a mind with which to think, but also a heart to contain his deepest commitments of love, and a will to choose the way in which he will live. All of these take part in whatever one comes to understand and believe; and, when one rejects God’s truths, he does it, not just with his mind, but with his whole being. When one does not believe, it is not just a lack of understanding; it is because with the heart one does not want it, and with his will he refuses to do what it requires. Man does not understand what God has revealed because he does not want the conclusions to which it leads. It is not just the mind; with his whole being he rejects what God has said.

We have a rather interesting reflection on this by Rev. Hoeksema, made in a series of sermons on the first chapter of Romans during the mid-thirties (transcribed by Mr. Martin Swart). It had to do with the gross sins described at the end of the chapter, such abhorrent things as sexual perversion and homosexuality, to say nothing of “unrighteousness, fornication, wickedness, covetousness, maliciousness,” etc. Of these he observed, that they are not just sins in themselves (although they certainly are that), they are the judgments of God. It is not that people, when they started down this way of transgression, intended to become perverts, homosexuals, and such like. For the most part they would have stood aghast at the suggestion that this should be their end. It is simply that when they left the Word of God-not wanting” to retain God in their knowledge”—the result was that “God gave them over to a reprobate mind, to do those things which are not convenient” (Rom. 1:28). It is the judgment of God which has brought them (as with much of the society in which we now live) to this loathsome end; and when still they do not repent, but with all kinds of rationalized arguments seek to excuse what they do and escape the consequences, they only thrust themselves on toward that most terrible consequence of all, eternity in hell.

Simple reasoning will never change this; only one thing can. A person may try all the reasoning in the world, and all kinds of rhetorical gimmicks as well—such as telling everyone that God loves them, and really would like to save them, as contrary to Scripture as this maybe but it will never change a soul. Only God can do that, as Ezekiel 11:19 says, “I will give them one heart, and I will put a new spirit within you; and I will take the stony heart out of their flesh, and will give them an heart of flesh.” Without that, no one will ever come to the truth.

It is this that makes it so ironical that through the years Rev. Hoeksema has so often been accused of Rationalism. In actuality it is hard to imagine anyone farther removed from that.

But let him answer for himself, as he dealt with the subject in a sermon about the men on the road to Emmaus from Luke 24:25-27 (transcribed from a tape).

Hoeksema’s teachings—if his critics would only take time to study them out—always presupposed the gift of faith. He never questioned but that the reasoning of the human mind, apart from the special operation of the Holy Spirit, can only come to naught. The Spirit of God must first open the mind and heart to receive what God has made known, as Jesus said, “Except a man be born again, he cannot see the kingdom of God” (John 3:3). Then, and only then, can one’s reason and understanding step in as a necessary part of true faith. Faith is a certain knowledge (Heidelberg Catechism, Lord’s Day 7); and there can be no knowledge without reason and understanding. That leaves no room for contradictions, either in reality or appearance, for the mind cannot grasp that which is contradictory. And God in His revelation cannot contradict Himself; for God cannot lie.

It was because of this that the doctrine of election was always so important to Hoeksema. It was not merely a matter of filling out his favorite theological paradigm; he understood the limitations of human thought full well, and had no desire to answer questions beyond that which God has made known. It was rather because he, as a pastor, had worked with many souls; and, as an exegete, had delved deeply into God’s Word. To do this was for him a privilege which he relished to the end; but always in the awareness that it could be done only if the Spirit gave the ability to perceive. And so was his privilege to teach and expound the Word; but always in the realization that it would be received only by those with whom God had provided hearing ears. Human effort cannot bring this to be; only the Spirit of God can, as the Scriptures say, “For by grace are ye saved through faith; and that not of yourselves: it is the gift of God: not of works, lest any man should boast. For we are his workmanship, created in Christ Jesus unto good works, which God hath before ordained that we should walk in them” (Eph. 2:8-10).

This is no Rationalism. Soli Gratia; it is pure grace! 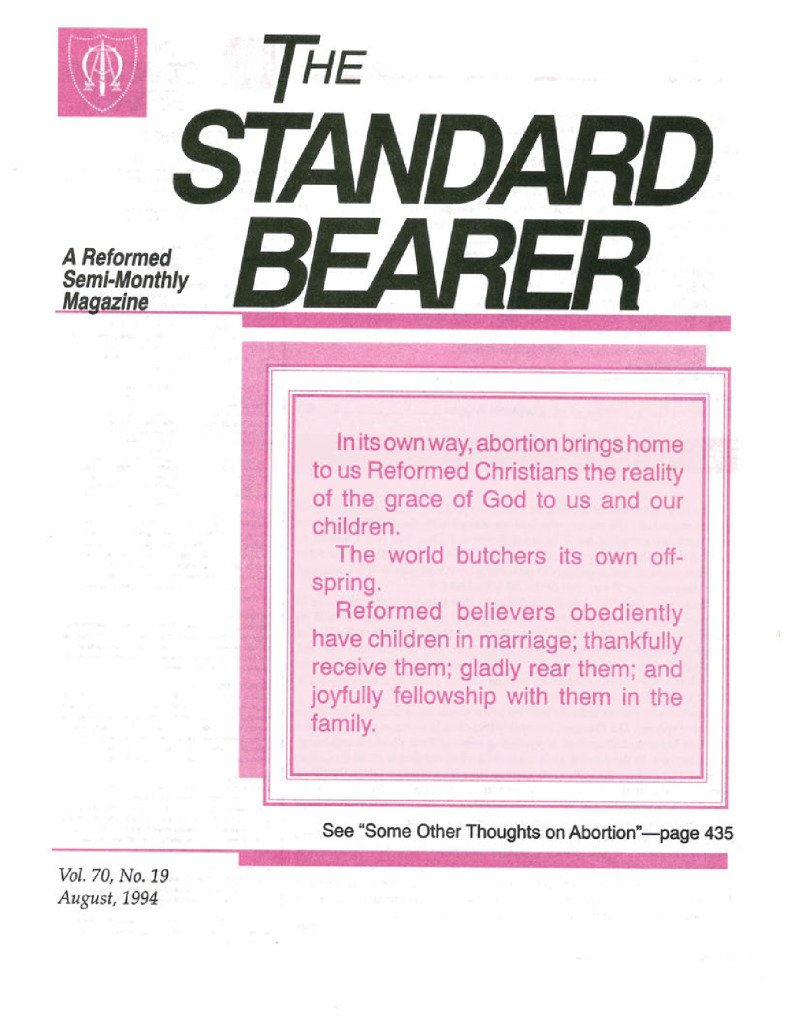