Once more Mr. L. W. of Spokane raises further questions and offers criticisms the esteemed editor and undersigned deem worthy of answer. But as Mr. W.’s letter is rather lengthy for the Question Box, brief excerpts will be taken from it with answer made as concisely as possible. It had been said (TSB, Mar. 15, 1967, P. 287), “the historic creeds and theological systems contain nothing of” Dispensationalism. Our western reader takes exception to this: “The Calvinist theology can be compared to a tree with at least two large branches. One branch is the covenant. ..theology, the other is Dispensationalism.” Answer: What Calvinist theology gives credence to Dispensationalism? — certainly not Calvin’s (nor the Reformers’), nor Owen’s (nor the Puritans’), nor Hodge’s, nor Debney’s, nor Vos’, nor Hoeksema’s.

Quoting Bibliotheca Sacra, which we assume is the theological journal of Dallas Theological Seminary, Jan.- Mar., 1943, pp. 136f,. L. W. writes, “The covenant theology ‘as a ‘constitutive principle of theology’…was…not mentioned even by any of the great teachers of the reformation period itself.’ ” Answer: We would not expect a theological principle, as such, to be mentioned before its existence or development. That, indeed, was “definitely peculiar to the Reformed System of Doctrine” (ibid.). For it is, admittedly, a historical fact that “It is a peculiarly Reformed heritage, even more distinctively so than the doctrine of sovereign predestination. For while the latter truth is held by other than the Reformed churches, the truth of the covenant was developed exclusively by them” (The Heidelberg Catechism, An Exposition, VI, 130, by Rev. H. Hoeksema). There we agree. Yet the covenant receives considerable mention in Calvin’s writings despite the fact that he did not treat or develop federal theology. For he was a most covenant-minded man, as is evident from his very frequent use of the term itself, being full of the covenant idea. (Inst., II, X; IV, XVI). Besides, covenant doctrine in its incipiency was taught by Caspar Olevianus (d. 1.587), one of the authors of the Heidelberg Catechism, in his popular tract, “The Nature of God’s Covenant of Mercy With the Elect,” which was published about one hundred years before the death of Coccejus (“whom almost everyone concedes to be its (covenant theology’s) original exponent.. .” (L.W.’s quote). So also Zacharius Ursinus, co-author of that catechism, and author of its wellknown commentary, was a nearly Reformation exponent of covenant truth (Ursinus’ Commentary 2nd Amer. ed., xiii, 96ff; Creeds of Christendom, I, 773f). Both the Heidelberg Catechism and the Belgic Confession hold forth the truth of the covenant, yet say nothing of any covenant of works, and that 84 years before the Westminster Confession. Therefore “great teachers of the reformation period” made considerable mention of the covenant. But we hold the covenant doctrine and reject Dispensationalism, not because either has or has not confessional support prior to 1561, but because the former is according to Scripture, and, remember, also according to the Reformed Confessions, while the latter is repugnant to both!

We are also informed that in the Bibliotheca Sacra,. July-Sept., 1966, a review appears of The Standard Bearer article, April 1, 1966, Dispensationalism, in which the reviewer wrote, “Reading the article makes it plain that the author has read little or nothing of the current and recent literature by dispensationalists…” Answer: L.W. has made quotes from this journal which go as far back as 1943 —not very “current and recent.” However, copies of that journal in that period were consulted in doing the research on the Standard Bearer’s Dispensationalism series. Thousands in this country carry almost everywhere with them a Scofield Reference Bible, so that there is still quite a current of dispensationalism moving along, a rather recent one, too, for that Bible in the same 1917 edition is still very much in evidence. With all its errors, it has never yet been withdrawn. True, by the middle of April, 1967 a new edition of this Bible is (expected! on the market. But will these errors and inconsistencies of dispensationalism be therefrom eliminated? That remains to be seen.

The above reviewer is also said to have quoted from the article, Dispensationalism, “that a dispensation: ‘is stewardship, administration (literally, economy) and signifies not an era.”‘ This is not correct, for it takes out of context. The remark was not with reference to “a dispensation,” as such, but referred to the word in the King James version incorrectly translateddispensation, which more correctly means economy, stewardship, administration, and not a period of time. The article also stated, “Dispensationalists need make no appeal for their contentions to the word translateddispensation in the Bible. For there it does not mean a period of time.” And, “This brings us to the crux of the matter. For dispensational error lies not in holding that there are dispensations of time in sacred history. The Church has never denied that. The error lies in the fact that the Church is made a mere parenthesis in God’s scheme of things…” It is plain that L.W. has not read this article where these statements appear.

He then goes on, “From the title of the article, ‘Dispensationalism; An Ancient Heresy,’ (sic) would it be the opinion of the Protestant Reformed Churches that Professor Pieters was a heretic?” Reference to the latter is in connection with his “use of the word ‘dispensation’ to indicate a period of time,” to which usage there is no objection, as already shown. But where is the above title found? Does it not rather appear in large, bold type, “Dispensationalism An Ancient Error“? There is quite a difference between heresy and error. Nor have these articles conceived of Scofield himself as a heretic. But as to how serious an error this theory is, re-read the last sentence under the above, and correct, title.

Attention is next called to “The Standard Bearer for Feb. 1, 1967, p. 200, ‘Dispensationalism, then produces a view of history which is man-centered.’ In seeming contrast, Dr. Charles C. Ryrie…” wrote “that Dispensationalists believe that ‘Scripture is not man-centered as though salvation were the main theme, but it is God-centered because His glory is the center(Moody Monthly, Nov. 1965, p. 10).’ ” Answer: It is good that Dispensationalists lay claim to theocentricity, but then they ought to be consistent with it, for their theory is still man-centered, as was demonstrated in the second paragraph of the above article, the general contents of which, by the way, were not called into question, as was neither the main point of the article itself.

Again: “Were not all the other ages dispensations of grace? Of course, the Dispensationalist will answer, No (TSB, Feb. 15, 1967, p. 235). ‘In seeming contradiction, Dr. Ryrie writes: ‘The labeling of the present dispensation as that of grace has been taken by critics to mean dispensationalism teaches there was no grace in any other age. But the charge is not true. ..the positive teaching of dispensational writers is that salvation is always through God’s grace (Moody Monthly, Nov. 1965, p. 60).’ ” Answer: Why then does Scofield in his note on John 1:17 see “legal obedience as the condition of salvation” in the Old Testament day? Why then does he also say at I John 3:7, “the righteous man under the law became righteous by doing righteously; under grace he does righteously because he has been made righteous?” Why, further, does he say, “The Sermon on the Mount is not grace (SRB, p. 989)?” See also what he wrote at Ephes. 3:2 and Matt. 28:19. This from literature still “current and recent” but nonetheless erroneous. Then if one agrees with the Ryrie-statement, above, one ought also to agree with “Dispensationalism A Blind Legalism,” (TSB, Feb. 15, 1967) if not for its title, then for its content’s sake. 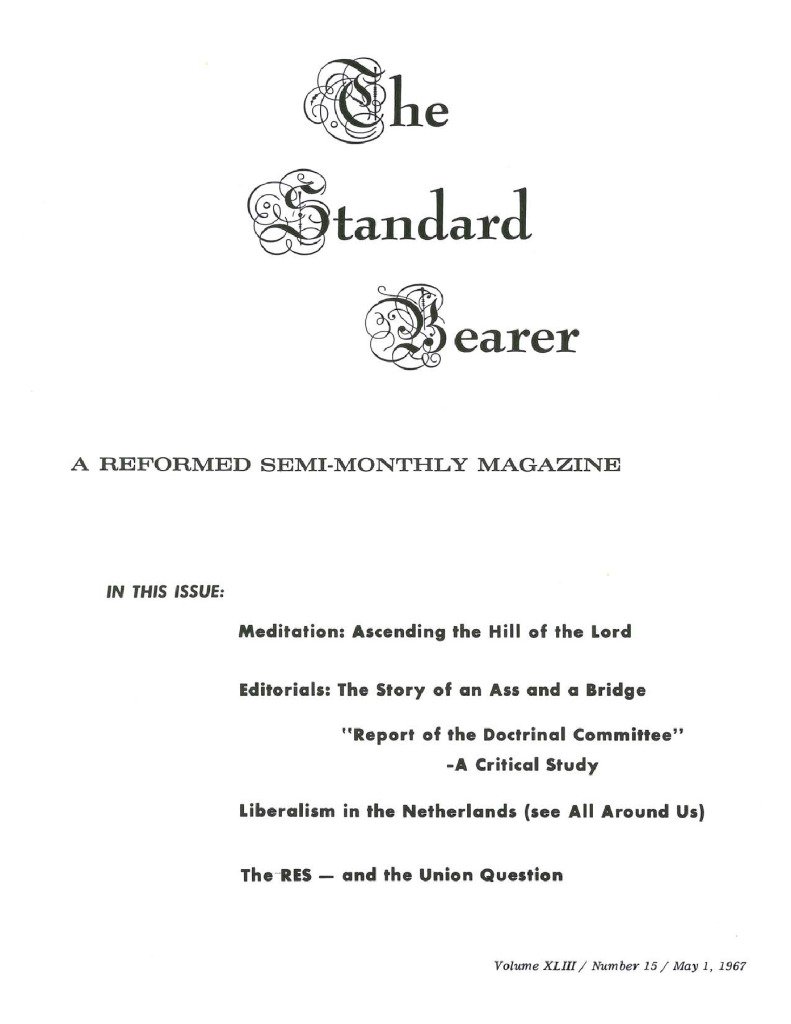