Shortly after Dordt a heresy arose which cast a long shadow over subsequent history of doctrine. It originated and was found primarily in France, but it spread to England, where it had great influence. It is a heresy with which much of the church is burdened even today. It is the heresy of Amyraldianism, with its special emphasis on a universal grace found in the preaching of the gospel, in which God expresses His desire to save all who hear the gospel. It is known today as God’s gracious and well-meant gospel offer. It is worth our while to pay some attention to this heresy, for it is not only pervasive, but also forms a part of the historical background of the Protestant Reformed Churches. The well-meant gospel offer is not an invention of modern times. It has a long history.

Moïse Amyraut was born in Bourgueil, Anjou, France in 1596. He came from an influential Protestant family, which enabled him to receive an excellent education in France’s leading schools. After first studying law, he turned his studies to theology after reading Calvin’s Institutes of the Christian Religion. This is interesting, because his later heresies were consciously directed against Calvin’s teachings on the particularity of grace—interesting, because many defenders of the gracious well-meant gospel offer appeal to Calvin in support of their views. Amyraut knew better and consciously rejected Calvin’s views to develop his own version of a gracious offer of the gospel to all men.

Having turned to theology, Amyraut studied in the University of Saumur under John Cameron. Amyraut’s views and heresies ought not really be called Amyraldianism, because everything he later taught came from his teacher and mentor. The two became much attached to each other. The University of Saumur was gifted with able professors and attracted students from all over Europe, though especially from Switzerland. Having thoroughly imbibed the teachings of his master, Amyraut became preacher in the Reformed church of Saint-Aignan. But his stay in Saint-Aignan was brief, for he was called in 1626 to become professor in Saumur, his alma mater, to succeed a staunchly Reformed man by the name of Jean Daillé, although Daillé later became more open to Amyraut’s views. Amyraut proved to be as popular as his mentor, if not more so. His position of prominence in the Reformed Churches of France led to his appointment by the Synod of Clarenton to bring various requests of the Reformed Churches of France to the attention of Louis XIII. Even in court he made a good impression.

In 1633 he became professor of theology in Saumur along with two outstanding seventeenth century theologians, J. Louis Cappel and Joshua De la Place. His skill as a teacher and his pleasing personality won wide acclaim throughout Europe and raised the school in Saumur to a glory that it had never before had. It was also the forum for which he was waiting, and he used it with skill to promote his views.

In general, Amyraut had as his motive the reconciliation between Lutheranism and Calvinism, but he attempted to achieve his goal by means of a serious compromise of Calvin’s teachings. He was well aware of the fact that Lutheranism had adopted a synergism that described the work of salvation as a cooperative venture between God and man. He knew this was totally incompatible with Calvin’s emphasis on sovereign and particular grace in the work of salvation. If reconciliation was to take place, Calvinism had to be modified; and this he set out to do.

Although the French Reformed Churches had been weakened by persecution and the flight of many Hugenots, there were still men who stood strong in defense of an uncompromised Calvinism. It must also be remembered that the events that surrounded the public propagation of Amyraut’s heresy took place but a short time after the decisions of the great Synod of Dordt. The Synod met in 1618-’19; the first objections to Amyraut’s teachings were filed with the synod of the French Reformed Churches in 1637, less than ten years later. What Dordt had decided was well known in France, and the strong statements of biblical truth regarding predestination and sovereign grace were widely published. In fact, although a delegate from France was forbidden by the king to be present at Dordt, nevertheless he had followed the proceedings closely and had contributed many ideas and objections to the Arminian position when the Canons were being formulated.

An influential and well-known French theologian named Du Moulin, along with some others, brought charges against Amyraut’s teachings to the Synod of Alençon, which met in 1637. It was a measure of the weakness of the French Reformed Churches that the Synod was unable to condemn Amyraut—in spite of the objections to his views brought by the church’s most gifted and prestigious theologians. Amyraut was acquitted of heresy.

This was not the end of the matter, for Amyraut’s opponents continued to seek an official condemnation of his views. But nothing availed. The Synod of Charenton in 1644 reaffirmed the decisions of Alençon, and, while the Synod of Loudun in 1659 condemned his views, something that at last appeared to be a victory for the orthodox, the same synod, strangely and inconsistently, appointed Amyraut to the extremely important task of revising the Church Order. No censure, only encouragement—such are the strange ways of synods that are afraid to stand unequivocally for the truth.

Amyraut died in 1664. Perhaps his death brought a sigh of relief to the French churches, for with his death the controversy over his views also died.

The views of Moïse Amyraut are strange. They have been called hypothetical universalism. Their strangeness, however, is not due to their novelty, but to their obvious contradictory ideas.

Amyraut was a good student. It is almost certain that he was aware of the bitter controversies that had raged between Augustine, the bishop of Hippo, and the Pelagians, and later between Augustine and the Semi-Pelagians, back in the fifth century. These controversies had raged in the church even after Augustine’s death and had only finally been settled at the time of Gotteschalk, that courageous defender of Augustine’s views who had rotted in prison for his faith. Rome had adopted a Pelagian position.

Although the views of the Semi-Pelagians, and the obvious reasons why Rome adopted this heresy, are subjects into which we cannot enter in this article, we can mention that among those views defended by the opponents of Augustine were: a general love of God for all men; a general grace given to all flowing from God’s universal love; a universal atonement made by Christ, which extended to all men; and a universal appeal in the gospel from God to all men expressing His desire to save them. Rome ultimately opted for this heresy, so contrary to Augustine’s views, in the interests of preserving its own heretical position of the merit of good works.

Those who defend the gracious well-meant offer of the gospel in our day ought to be aware of the fact that they are the purveyors of ancient heresies, that they enter into conflict with Augustine when they teach their views, and that they side with Rome and its doctrine of the meritorious value of good works. Even the same texts were appealed to in those days, as the defenders of the well-meant offer use today, notably I Timothy 2:4 and Matthew 23:37. Any student of church history knows this. Amyraut presented a position that is so much like the inconsistent and contradictory position of those who try to maintain a well-meant gospel offer and still be Reformed that one shakes his head in disbelief that some proponents of this heresy can come up with the same notions and present them as Reformed truth.

The chief propositions of Amyraut were these. 1) God’s grace is universal in the sense that God desires the happiness and blessing of all men—provided they will accept His overtures of love. 2) None can be saved without believing in Christ. 3) God does not refuse to any man the ability to believe, but God does not give to every man His assisting grace, which improves a man’s ability to believe. 4) None can receive this assistance to believe without the Holy Spirit, whom God is not bound to give to anyone, and, indeed, gives only to the elect. 5) Christ died for all men, a teaching which Amyraut insisted was the view of Calvin—as many, wrongly, do also today. 6) The universal grace that God shows to all men is insufficient to save them, because it is an objective grace, which offers salvation to all men on condition of repentance and faith, while subjective grace changes the heart.

In other words, Amyraut believed in universal grace and particular grace; in universal atonement and particular atonement; in an offer of salvation to all men and a work of the Spirit only in some; in a will of God to save all and a will of God to save the elect; in the necessity of the work of the Spirit to be saved and the ability of man to fulfill the condition of faith. It is like a man walking with one leg on the sidewalk and the other in the gutter. He limps, staggers from the sidewalk to the gutter and back again, and halts between the two opinions whether the sidewalk or the gutter is the better place to be. He drifts rapidly back and forth between Calvinism and Semi-Pelagianism and does so in the name of being Reformed. He accepts contradiction as desirable and finds delight in antagonistic doctrines that no one can understand.

Spiritually this is impossible, ofcourse. The inevitable result is a drift into a totally Pelagian and Arminian position, and an abandonment of even a semblance of being Reformed. The spiritual reason for this is defined by the Lord in the words: “He that is not for me is against me.” One cannot sit long on a theological fence, tottering between an orthodox position and a Pelagian one. He soon falls off the fence on the wrong side.

I say this because Amy-raldianism became a curse to the churches that were influenced by it. That takes us back to John Cameron, Moïse Amyraut’s teacher. 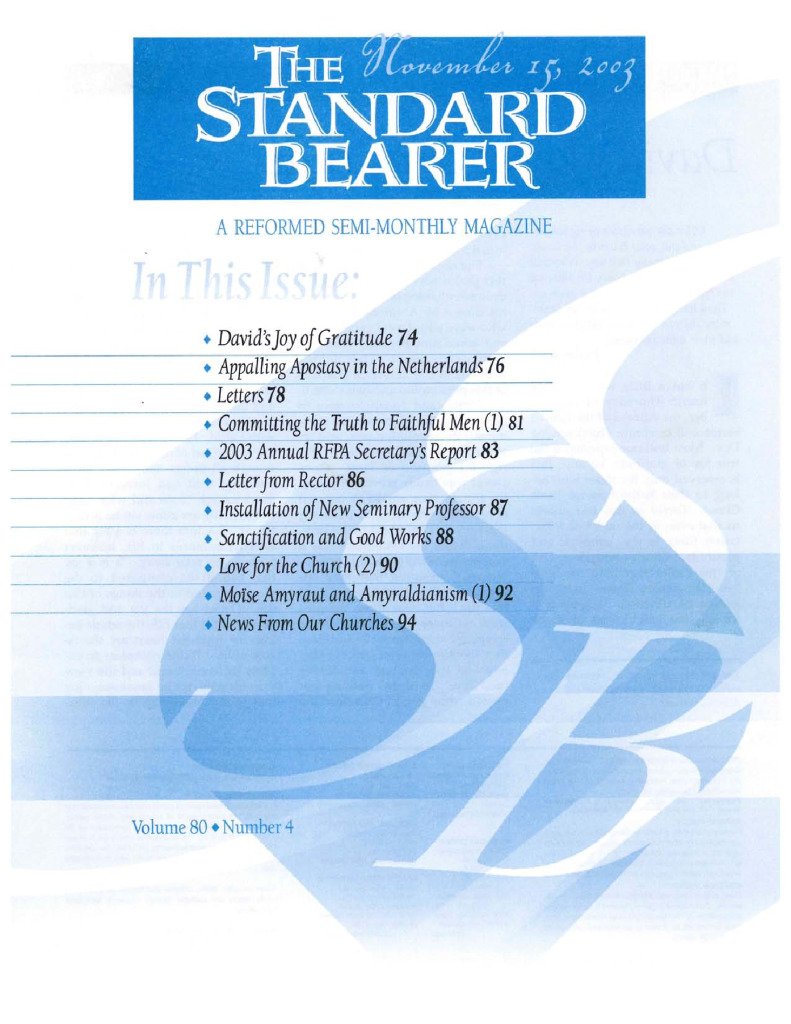