Prof. Hanko is professor emeritus of Church History and New Testament in the Protestant Reformed Seminary. Previous article in this series: May 1, 2006, p. 354.

Proceeding from a fundamental premise that the Bible is, at least in part, a human document, higher criticism has come up with many strange ways in which to explain Scripture. I am sometimes amazed at the fertility of human imagination, which can invent so many theories to deny that Scripture is the Word of God. It makes one wonder, when one discovers the literally hundreds of books that have been written on this subject, all professing to be learned treatises, all written by self-proclaimed scholars, but all having one thing in common: Scripture is not verbally inspired.

Questions have been raised over the last two or three centuries over the authorship of various writings from antiquity—even over the question whether Shakespeare actually wrote the plays ascribed to him. But no other writing of ancient times has ever been subjected to the scathing criticism to which the Scriptures have been subjected. No other body of writings has ever been challenged the way Scripture has. No other manuscripts from the past have been so ruthlessly torn to shreds and have occupied so much of the time of unbelieving critics to learn of their origin as has the Bible.

One quite naturally asks the question: Why all this frenzy to disprove the Bible as the Word of God, if it is only a human book anyway? Why write hundreds and perhaps thousands of unreadable tomes about a book that no one ought to believe in any case? The only answer that can be given to that question is this: Every critic knows that the Bible is the Word of God, but hates that truth. And so he bends his efforts to discredit it, and to persuade others to do the same. The Bible condemns him for his sin, and he will not repent. The way to escape from the condemnation pronounced by the Bible is to attempt to destroy the Bible. And so men try again and again.

A striking example of this is found in what is called an “eschatological” method of Bible interpretation. This method is used to justify women in the special offices of the church and homosexuality in its members. The theory goes like this.

It is obvious that the Bible condemns women in the special offices of the church and it is undeniable that the Bible condemns homosexuality, but these were the opinions of Christians from long ago, and perhaps opinions that had some validity in past centuries. But the Bible must be interpreted in the light of history moving towards the end, where the ideal will exist. That ideal will be the equality of all, including male and female, and the acceptance of all sinners by a merciful God who loves all. And so, as history moves irrevocably towards that end, we must move beyond Scripture’s prohibitions and do all in our power to achieve now what Scripture says will someday be reality. In this way we confess our faith in a brighter and happier future.

This the church has done. It is not my intention to define this doctrine in all its details in this article, but the main tenets of Scripture’s teaching ought to be emphasized.

Even though Reformed theology has made use of the term “human element” or “human factor” in its doctrine of inspiration, the time has clearly come to abandon the term and the idea. It has led to confusion and corruption of the doctrine. There ought not be any regrets about abandoning the term and the idea, for it is impossible to find anywhere in Scripture so much as a reference to such an element. The Scriptures from beginning to end, not only the classical proof texts, teach that the divine element is the only one that must be considered. Nor ought the believer to be perturbed by the charge often made that such a view of Scripture is “Docetic.” Docetism was an ancient heresy that denied the human nature of Christ. To deny the human element in Scripture is said to be docetic, the underlying premise being, of course, that what is true of the union of the two natures of Christ in one person is also true of a human and a divine side of Scripture united in one book.

Scripture is given to the church by God, word for word. Scripture is verbally inspired, fully inspired, totally that which the Holy Spirit wanted written. Hence, Scripture is both infallible and inerrant. Attempts to find a difference between these two terms, to justify the presence of errors in the Bible and still speak of an infallible Scriptures, have failed and ought to fail because they are word games meant to introduce error into Scripture.

Does all this mean that we believe what in my high school days was called the “typewriter theory” of inspiration? Was the Bible written mechanically without any trace of the character of the men who wrote it? Were they acting only as secretaries? Did God play on the keyboard of their minds in much the way a rapid typist plays on the keyboard of a typewriter—or computer? Or did the Bible perhaps fall complete from heaven as a gift of the angels?

Inspiration means nothing of the kind. The Bible, inspired by God through the Holy Spirit, gives us the infallibly inspired record of the revelation of God in Jesus Christ in the salvation of the church. This is the great miracle of the ages of which the other miracles recorded in Scripture were pictures. The inspiration of Scripture is organically connected to the miracle of salvation. This connection is there because the Scriptures, while having a great deal to say about the reprobate and even, as subordinate to the gospel, saying something to the reprobate (viz., that they must repent), is written for the church, the company of believers. It is, so it has been said, Christ’s love letter to His bride for her to carry with her while He is still absent from her. The Scriptures are also connected inseparably to the miracle of salvation, because salvation is, in fact, accomplished through the Scriptures. The gospel is preached from the Scriptures. The people of God derive their strength, their comfort, their hope, their blessedness in searching the Scriptures. It is a mighty fountain of blessing from Christ Himself. The Bible belongs to the miracle of salvation.

The inspiration of the Bible is, therefore, itself a miracle. It is a miracle planned in God’s eternal counsel from eternity. God eternally determined to reveal Himself in Christ. He determined to give the church an infallible record of that revelation as it took place in history and will reach its grand finale when Christ comes again. He determined how the Bible would be written—that is, that He would use men to write it who lived in different times, had different personalities, were brought up under different circumstances, and would be used as God’s secretaries in such a way that all their personal attributes would be reflected in what they wrote. Yet, their role would be of minor importance. In some instances we do not even know the identity of the men who were used by God to write parts of the Bible.

When every man God eternally determined had, through God’s sovereign control of his life, written by divine inspiration the part eternally assigned to him, the product was one book with one theme. It was perfect, complete, and exactly suited to the purpose for which God had intended it. It was the church’s Bible. Because the Bible was prepared as a part of God’s means to save His people through Christ, the Bible is indispensable for salvation. To take it away as the Word of God in any sense is to jeopardize man’s salvation. Hence, to believe it is to be saved; to reject it is to be damned.

The church has treasured the Scriptures. The Reformers insisted that no work of reformation would be possible without restoring the Bible to God’s people, and that there was no hope of delivering the saints from the chains of popery without freeing the Bible from the shackles of Roman Catholic theology. The church produced men who understood the importance of the Scriptures and were willing to die a martyr’s death to give Scripture to God’s people in a language they could read. The roll call of martyrs who lived in constant peril of their lives because they insisted that Scripture alone was what they would believe is long and illustrious. In heaven alone is known the number of times God’s people have turned to God’s Word in all the sorrows and sufferings and have found peace. Scripture is the cooling fountain of an oasis in the desert of this life, from which God’s people have drunk deeply and longingly to quench their parched souls.

The words of Theodore Beza to the Duke of Guise, though referring to Christ’s church, can be applied to the senseless and wicked attacks on Scripture by the higher critics: “Sire, I would have you know that it is an anvil which has worn out many an hammer.” 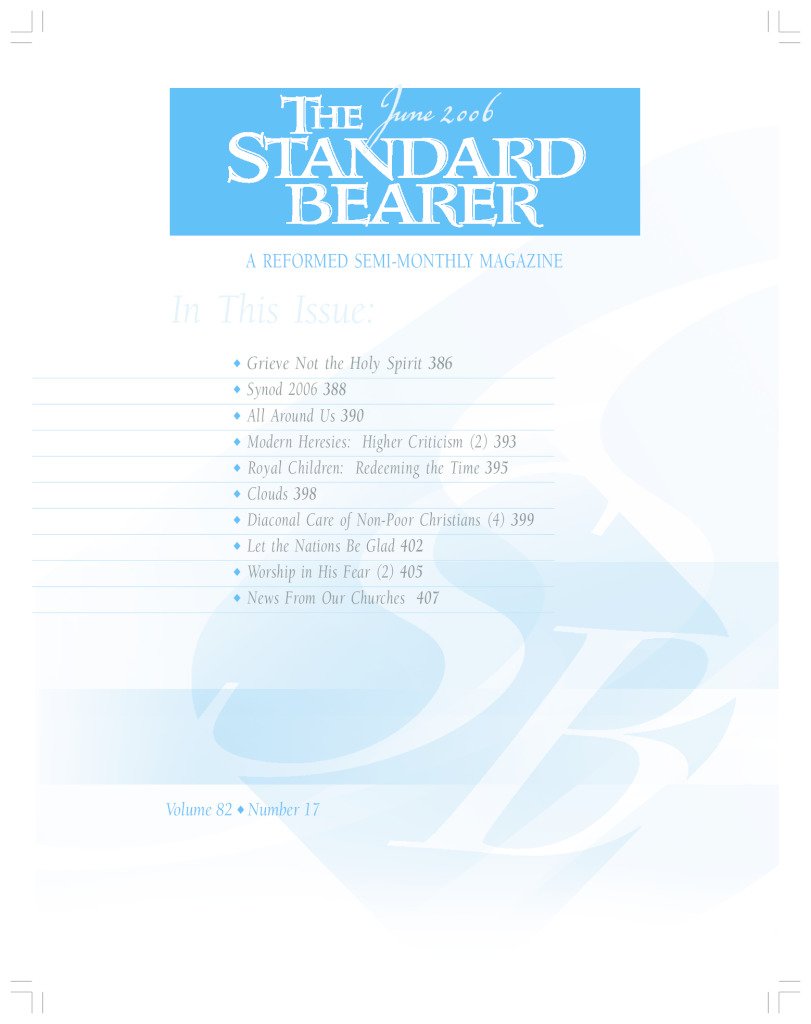