The Dutch have a proverb which goes as follows:onbekend maakt onbemind, that is, “unknown is unloved”!

Such is the case also when the Home Missionary does not keep the churches a bit informed about his whereabouts and labor. Not that I feel any particular guilt in this respect. That I did not write the last while in Loveland was simply because the official secretaries of Classis and Synod were keeping the people informed as to the status of Loveland. However, now we are in the Forbes-Isabel district. And, I believe, our people in our Protestant Reformed. Churches are desirous to hear about our labors and experiences, our joys and sorrows also in this field. We intimated the last time that we are spending five days in Forbes, N.D., and nine days in Isabel, S.D., every two weeks. The reason for this arrangement is that these two churches are approximately 150 miles apart. However, that distance is not as far as it might seem to be. With a good car one can drive this distance in three and one half hours without breaking the speed and traffic jaws. And the road is excellent. Forbes lies approximately one hundred and fifty (150) miles east from Isabel and about thirty miles north.

In Forbes the congregation meets in a little white schoolhouse, rather centrally located in the group at that place. Generally we have about 16 people in church on Sunday during the services, although we are happy to report that the past two Sundays two more families have worshipped with us, so that our number was twenty-two. And the past Sunday with relatives from Michigan visiting, the number was thirty.

Here in Isabel we have our little home. It is a small house. But it has all the modern conveniences that one finds in an average home here. We have lived here for three months now; we have a beautiful and productive garden, the house is neatly painted and all is very pleasant here at our “cottage home.” Flowers bloom at the corners. A good brother from Michigan, while here, remarked that it was an “echt oud-‘country’-sche tuin.”

Isabel has its own church. It is a little church, possibly a white school-house moved on to the large lot here in Isabel. Although it is rather primitive in design, it serves and has served the purpose for many years. In fact, Isabel was a congregation as early as 1919. Through many trials and vicissitudes the congregation continued to exist. It was especially since 1953 that Isabel began once more to experience a more vigorous life under the sound preaching of Rev. H. Mensch. Today Isabel numbers six families or 26 souls. These six families purchased a home for the minister in November of 1957. They make a payment of $30.00 per month, so that in ten years it will be paid. This symbolizes their faith in view of the future, we believe.

The Forbes-Isabel churches contribute the amount of $145.00 in cash toward our Mission fund per month, plus the $30.00 per month for our home in Isabel. And some of the brethren have expressed that they feel that possibly they could do a bit more. This means that to all practical extent our Mission fund receives enough money from these churches to put two programs per week on the radio for one year. This is a fact which possibly even all the members of the past Synod were not informed of. The undersigned was not requested to speak on his present field of labor. Synod evidently did not feel any need of this. However, the undersigned believes that our people are interested. And this interest should not wane! For when interest is on the downhill trend, grumbling and criticism (sometimes wholly uncalled for and ethically unfair) are on the upgrade! And evil communications corrupt good mariners!

The question may well be asked: why do these people seek the fellowship and church affiliation with the Protestant Reformed Churches? Do they do this because their “bread is buttered on that side”? Let us not be unrealistic. These brethren need our financial help too. Is that a sin? But what is a virtue, is, that they love the Reformed truth, and were willing to sever connections with the Eureka Classis without knowing whither to turn; whether they will be received by the Protestant Reformed Churches!

They passed through a “Sturm und Drang” period of transition. Not all hearts were equally brave. But the pillars in the church stood and others rallied about them. And they have no regrets, I am sure. They rejoice in the truth.

Next time we shall, D.V., tell you about the meetings which we conduct here and about the wonderful “field day” which these two groups enjoyed together at the Lake Hidden Wood Park near Selby, South Dakota. The latter was on the fourth of July.

May our motto ever be: ora et labora! 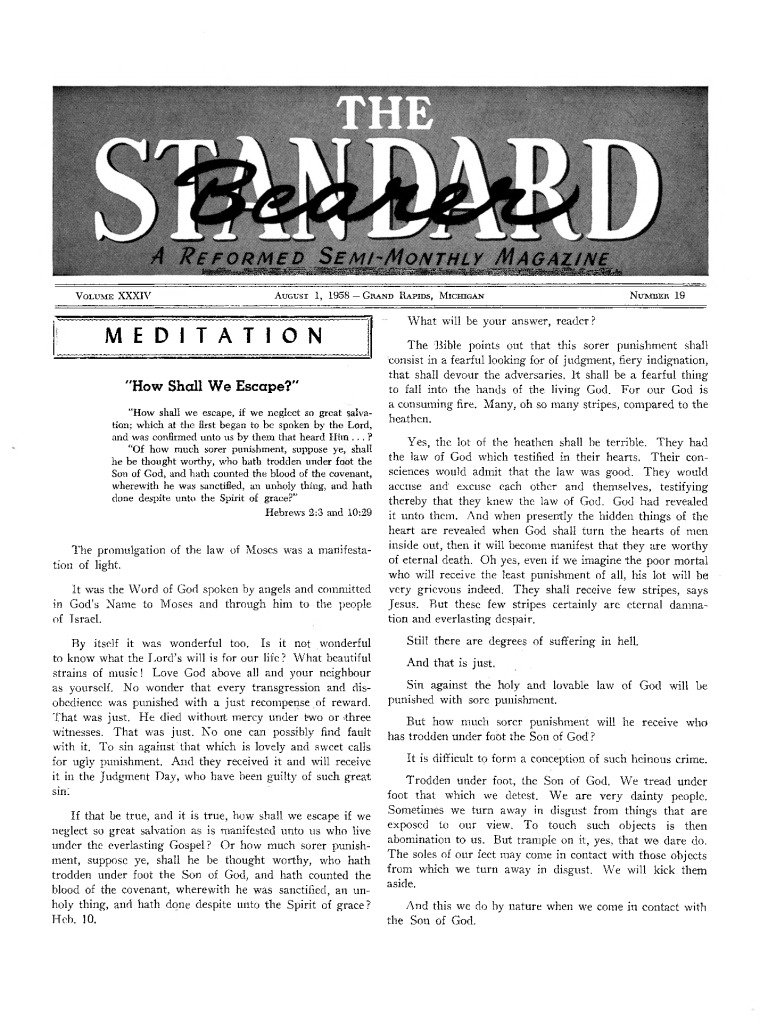