The year of our Lord, 1960, has come to a close. For the undersigned it was definitely a different year from the previous five that he might labor as the Lord’s servant as Home Missionary. During the first five years the lion’s share of the time was spent in Loveland and in Isabel and Forbes. How; ever, this year, although largely spent in and around Pella, was definitely quite different.

When reflecting upon the past year I think that I can say that it was a year characterized by “lecturing,” preaching and writing and visiting. According to the diary kept by. Mrs. Lubbers I see that, all told, I lectured no less than 13 times during these twelve months on such subjects as:

1. “Can You Quote the Ten Commandments?”

2. “The Serious ‘Confrontation’ in the Preaching of the Gospel.”

4. “Christian Stewardship in a Democratic Society.”

5. “Calvin and the Reformed Faith.”

6. “The Infallible Earmark of the Last Hour.”

It may interest the reader to know that your Home Missionary lectured once in Oskaloosa, Iowa, in the American Legion Hall; twice did he lecture in Pella in the American Legion Hall; twice he lectured in Prairie City: in the High School; once in Sully, Iowa, and once in Kilduff, Iowa, an adjacent town of Sully. A lecture was given in our churches on the above-named subjects in Loveland, Colorado, Isabel-Forbes, S.D., Randolph, Wisconsin, Hull, Iowa and Holland, Michigan.

Looking at the record I notice that some two thousand pieces of mail were sent out, Standard Bearers, brochures, pamphlets, Beacon Lights and leaflets, composed by the undersigned. It was also the privilege, upon request, to type out material for a pamphlet on the subject “God’s Unchangeable Marriage Ordinance.” It is hoped that this pamphlet will be from the press in the near future.

No less than 21 essays were written by the undersigned this year from “Holy Writ” which entailed a very fruitful research for the undersigned. Incidentally, I believe that it has not happened before that the Home Missionary of our Churches filled a rubric in The Standard Bearer for six years. The Lord gave strength all during this time. It did not happen, I believe, during all this time that sickness prevented me from preaching one sermon. And during the year 1960 I might preach not less than 105 times.

All during these labors, lectures, preaching, sending forth of literature I experienced the sustaining grace of God. His strength is made great in our weakness. It requires much strength in soul and spirit to preach for small audiences of people, ranging from “three or four” to about twenty-five. And, yet, the marvel of it is that they were and are joyful experiences. A day of “small beginnings”? Surely such it is for us in Pella. But a day of “small beginnings” is far better than a day of stark pessimism and fruitless speculation. Ever there are the “many” that say, “Who will shew us any good?” And, if ever any little group would be tempted to thus wail and whimper it would be those “two or three” in Pella! But when those who look at things “objectively” come and see things from afar in Della and then say to their soul (“who will shew them any good” in their lot, it is simply a marvel that they say, in hope against hope, “Lord, lift thou up the light of thy countenance upon us!”

What a joy to be present in a little group with strong faith, where none complain because they attempt not to walk by sight but by faith. For my own spiritual refreshment this morning I read what Spurgeon has to say on Psalm 4:6: “There were many, even among David’s followers, who wanted to see rather than believe. Alas! this is the tendency of us all! Even the regenerate sometimes groan after the sense and sight of prosperity, and are sad when darkness covers all good from view. As for worldlings this is their unceasing cry. ‘Who will shew us any good?’ Never satisfied, their gaping mouths are turned in every direction, their empty hearts are ready to drink in any fine delusion which imposters may invent; and when all these fail they soon yield to despair, and declare that there is no good thing in either heaven or earth. The true believer is a man of very different mould. His face is not downward like the beasts’, but upward like the eagles’. He drinks not from the muddy pools of Mammon, but from the fountain of life above. The light of God’s countenance is enough for him. This is his riches, his honor, his health, his ambition, his ease. Give him this and he will ask no more. . . . Oh, for more of the indwelling of the Holy Spirit, that our fellowship with the Father and with his Son Jesus Christ may be constant and abiding.”

That was also what we might enjoy in the year which has gone by.

In Pella the Reformed Witness Hour is heard each Sunday morning at 7:30. And many, many are they who listen to it and enjoy this hour. I have had abundant occasion to know this in my contacts with people in Pella and surrounding areas! The testimony of this radio ministry is simply wonderful for them. Dear reader, have you ever lived in such straits for your very life’s sake? Do you look forward with longing for the Reformed Witness Hour, or do you miss it (if you live around Grand Rapids, Michigan) due to your afternoon nap?!! I know people who wait for it with the breaking of the dawn, even as watchmen look for morning light.

Just this week I received a note from Pella: “Sunday we had services; the usual group was present.” This means that on Sunday afternoon about 8 people gather in the Legion Hall and listen to a sermon taped in First Church and are led in the services by elder C. Vander Molen. This is true when they have no classical appointment and when the undersigned is not present.

Yes, a day of small things.

Let them not be despised. No church is so small that it can be put in the class of “Plant No: 4” that does not pay off! 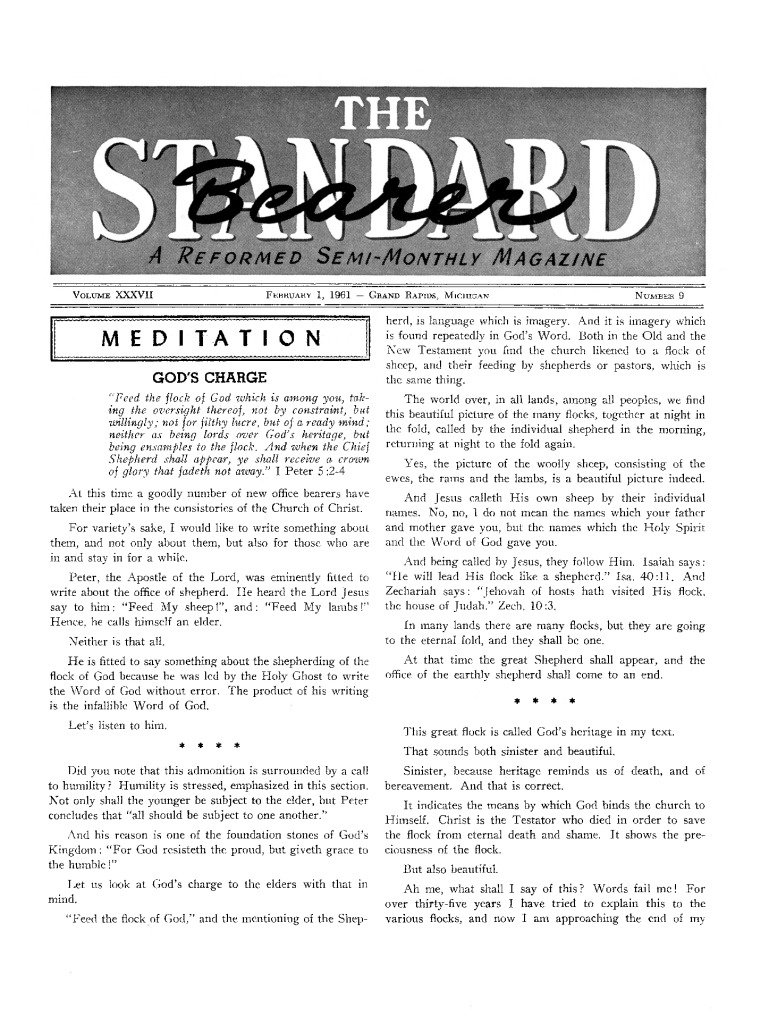