In the previous issue we discussed a bit of the history, the setting, and the audience to whom the Apostle Paul preached on Mars’ Hill in Athens (cf. Acts 17:16-34). In this issue it is our intention to examine the content and the fruit of the Apostle’s preaching (cf. verses 22-34).

According to verse twenty-two the Apostle “stood in the midst of Mars’ Hill.” Concerning the significance of this, John Peter Lange comments: “With all the confidence of faith he takes a position in the middle of the plateau on the hill.. . . He saw before him the Acropolis, which rose above him, and was adorned with numerous works of art; beneath the spot on which he stood, was the magnificent temple of Theseus; around him were numerous temples, altars, and images of the gods” (Lange’s Commentary On The Holy Scriptures). The Apostle was standing on the very throne of Anti- Christian philosophy, art, science, religion, and culture! Here he will proclaim the gospel of the sovereign God as revealed in the resurrected Christ. Seeing all this idolatry the Apostle proclaims: “Ye men of Athens, I perceive that in all things ye are too superstitious” (vs. 22). “Too superstitious” means “very superstitious.” Some commentators attempt to soften the blow by interpreting Paul to mean that the Athenians were very religious, even a God-fearing people (cf. Lange, A. T. Robertson, et. al.). This simply is not true. The Apostle points to the very heart of the problem of these Athenian philosophers. They were very superstitious. This means they were wholly given to idolatry and vain philosophy. They had turned from the living God, the one, true God to serve idols. The Apostle certainly does not compromise the gospel or accommodate himself to this heathen audience. He begins by pointing to their unbelief as that was manifest in their idolatry. This is where every missionary must begin. Paul simply tells them that in all of their affairs they are very superstitious.

As proof of all this superstition the Apostle cites: “For as I passed by, and beheld your devotions, I found an altar with the inscription, TO THE UNKNOWN GOD. Whom therefore ye ignorantly worship, Him declare I unto you” (vs. 23). Among the multitude of altars and shrines to the many gods was this one inscribed: “To The Unknown God.” Apparently the Athenians were concerned lest they miss one of the gods. They feared the anger of the god they might have overlooked. More than this, the altar to the unknown god indicates the weakness and the utter futility and foolishness of their idolatry. To this point our own Rev. George C. Lubbers wrote convincingly: “So morbid is their fear that they even have an altar erected to the UNKNOWN GOD. They had written that superscription on that altar. And it should be quite evident that Paul is not here teaching or suggesting that the Pagan was in real spiritual quest after the living God. They were not seeking God. Paul only cites this as evidence that the Athenians’ multiplicity of ‘gods’ shows that none of these are truly gods, for else they would not have still built an altar to another. Paul points to the ‘Achilles heel’ in their idolatry. It is here that he points to the deep spiritual-psychological bankruptcy of all the other ‘gods,’ and even this unknown god does not avail them aught. Notice well that Paul is here not merely engaging himself in some clever witticism, but is giving, by implication, a profound, basic and soul searching psychoanalysis of the basic problem of all their religiosity. With this one observation he points out the ‘Achilles heel’ of the vaunted invulnerableness of the religion of these Epicureans and Stoics!

“Paul is not engaging in a philosophical discussion of ‘comparative religions,’ that he may come to the ‘conclusion’ that the Christian religion excels that of paganism on certain points as to doctrine and ethics, being careful not to expose ‘Athens’ as being entirely corrupt and worse than useless, but he is preaching! He is preaching Christ here on Mars’ Hill: Jesus and the resurrection! And all the world must stand ‘under sin,’ and all the world must stand guilty before God, and every mouth must be stopped (Romans 3:19). The entire world must become…guilty before God. Also here in Athens on Mars’ Hill! Here the glories of the Graeco Roman world stand in the condemnation; the Greek moralist too is guilty; thus he stands in his own conscience. The altar to the UNKNOWN GOD attests to this fact. Thus Paul preaches.

“Have we not pointed out that Paul here too knows himself a debtor to the Greek as well as to the barbarian?

“Well, then, all the philosophic constructions with which the Greek attempts to bolster his idolatrous world with his ‘wisdom’ must be shown to have this one ‘Achilles heel.’ And here too Paul will be caused to triumph in Christ, making the savour of His knowledge known in every place, to the one the savour of death unto death, and to the other the savour of life unto life. For Paul is not as many, which corrupt the Word of God; but of sincerity, but as of God, in the presence of God he speaks in Christ! And in this preaching he does not find a spiritual-ethical good point of contact with these pagans. There is none. There is only a point of ‘apprehension’ for those who are ‘grasped’ by the Spirit of grace, and plucked out of this evil world. And these were but few here in Athens!

“Still Paul appeals here to the ‘conscience’ of these men, and evil conscience, a non-sanctified conscience! Thus we read in II Corinthians 4:1-2: ‘Therefore seeing we have received this ministry, as we have received mercy, we faint not! But have renounced the hidden things of dishonesty, not walking in craftiness, nor handling the word of God deceitfully, but by manifestation of the truth commending ourselves to every man’s conscience in the sight of God.’ Here is no mere sparring for advantageous position in debate, no cheap trafficking of the Gospel as done by ancient and modern ‘gospel hucksters,’ but a commending to the consciences of these haughty Epicureans and Stoics! These are weighed in their own consciences and found wanting. All their ‘gods’ are found wanting! The altar to the UNKNOWN GOD attests to this fact. And the imaginary impregnable fortress topples, as did Dagon of old when he fell prostrate to the ground” (The Standard Bearer, vol. 41, pp. 428,429).

Concerning this altar to the “UNKNOWN GOD” the Apostle continues “Whom therefore ye ignorantly worship, Him declare I unto you.” There is another reading of this sentence which is translated: “What therefore ye ignorantly worship, this declare I unto you.” This latter reading has the better support and we accept it as the correct one. It was not, therefore, as many commentators explain, that the Athenians ignorantly worshipped Jehovah by means of their altar to the “UNKNOWN GOD.” Not at all! What they worshipped in their spiritual ignorance and blindness out of the hardness of their hearts was not the Almighty God but an idol. They worshipped a conception of their own minds and that is an idol. In their spiritual ignorance they rejected God as He was plainly revealed to them in the things which are made. In the creation all about them those Athenians could see even God’s eternal power and Godhead. But they had changed the glory of the incorruptible God into the likeness of the image of corruptible man, and of birds, and four-footed beasts and creeping things (cf. Romans 1:18 ff.). This accounts for all their foolish wickedness and futile superstition. This is what I declare to you, says Paul. He speaks plainly of their spiritual ignorance and blindness. The Apostle did not, therefore, proclaim an idol unto them, nor did he commend them for seeking after the true God. He pointed them to their idolatry which came from their spiritual blindness and rejection of the one, true God. Paul proclaimed the sovereign God of heaven and earth, the Creator God.

Note well, Paul declared God to them. That word means: to announce, promulgate, make known, proclaim publicly, publish abroad. One thing it does not mean is: to offer or invite! The Apostle simply published abroad there on Mars’ Hill the glorious gospel of sovereign grace in God’s Christ. And Paul did that against the black background of the idolatry, vain philosophy, and foolishness of the learned Athenian philosophers. 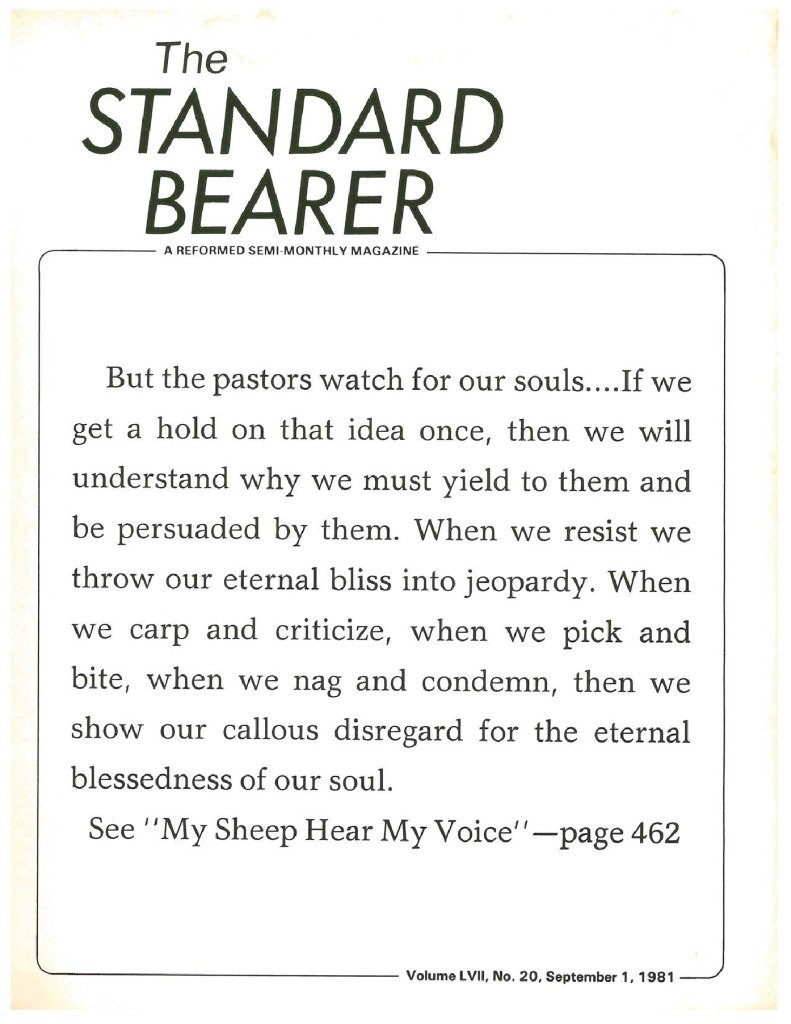