The Views of Henry Venn

The missionary methods of Henry Venn, Secretary of the Church Missionary Society (Anglican) in the mid-nineteenth century, may be summed as follows: 1) Converts are to be organized into groups called “Christian Companies”; 2) As these companies mature they are to be transformed into churches. This stage is reached when the missionaries determine that the group or company is able to support financially a native pastor; 3) The final phase is reached when groups of these “Native Pastorates” meet together regularly in a District Conference. At this point the native churches should be completely self-supporting, self-governing, and self-extending or propagating. When this stage or level is reached the “euthanasia of the mission” has taken place. The missionaries take leave of the native churches to engage in mission work in “regions beyond” as Venn put it.

As we noted in the previous article Venn’s views, revolutionary in his times, contain much which is commendable and from which we may learn. His methodology is complete in that it follows the development of the church through from the gathering of the first converts to its final manifestation, a denomination or federation of autonomous churches. The ideas of self-support, self-government, and self-extension are also worthy goals, provided they be understood in the biblical sense. In addition, it should be noted that according to Venn it is the mission and not the native church which decides when each of these three steps are to take place. Finally, advancement from the first stage (Christian Companies) to the second (Native Pastorates) is based on the criterion of self-support.

In spite of his warning against “missionary paternalism” there are weaknesses and problems with Venn’s methods. He saw, for example, self-government as a long-term goal. Before this level of ecclesiastical development can be reached, leaders have to be thoroughly trained and tested. Only after they have proved themselves are they to be ordained. The problem is that during this period of the training and testing of future officebearers the mission is in charge of the companies and native pastorates. Two questions arise: 1) Where is the biblical justification for a mission as an institution to stand over and next to the church? 2) Does not this practice promote the kind of “missionary paternalism” which Venn himself so vigorously opposed?

Answers to these questions do not come easily. With the first question one would be inclined to agree that there is no justification in the Bible for a kind of mission institution which stands over and next to the church. One finds nothing of the kind in the New Testament. On the other hand, the Bible certainly lays great emphasis on the necessity of sound instruction of converts. And, especially must future or potential officebearers be thoroughly instructed in the truth and in godliness. A young preacher of a young church is admonished by the Apostle: “Lay hand suddenly on no man . . . ” (I Timothy 5:22). This same preacher is taught that an elder (bishop) is to be “Not a novice, lest being lifted up with pride he fall into the condemnation of the devil. Moreover he must have a good report of them which are without; lest he fall into reproach and the snare of the devil” (I Timothy 3:6, 7). Concerning deacons, among other qualifications Scripture says they must “. . . first be proved . . . ” (I Timothy 3:10). The same is required of a teaching elder, the minister of the Word. They must be able to teach others (II Timothy 2:2). They are called to study the Scriptures so as to be able to interpret them correctly (II Timothy 2:15). Still more as spiritual leaders of the church, the ministers must lead exemplary lives (I Timothy 4:13-16; Philippians 3:17-21). Properly to train such leaders takes time. Circumstances on the field would certainly have a bearing on how much time this would take. Are the converts literate and rather civilized or are they illiterate and rather primitive? On one field all this might require a relatively brief period of time while on other, fields it might take years. In either case, however, the goal of an indigenous church must not be lost.

The Rev. Willem Berends, a missionary of the Christian Reformed Church to Nigeria, proposes an interesting answer: “The Biblical answer is that missionaries should take on the initial supervision of the new churches as representatives of these churches, and not as representatives of a mission. They should be members of the churches they serve, representing the church offices by virtue of their recognition and ordination by the sending church. As core members of the new churches they are to gather Christ’s people around themselves, admitting new members to the fellowship through baptism upon a confession of faith. They are to preach the Word, both outside and inside the church. They are to administer the Lord’s Supper, and to apply discipline where it is needed. They are to supervise the ministry of the church as it is carried out by all its members, both in service and in proclamation.

“In this way the new churches will be fully self-governing from their beginning. The first office bearers may not be indigenous in terms of race and culture, but they will belong to the church. And as the church grows and develops even its leadership will become more and more indigenous as the local people begin to participate. Those, who after training and testing are ordained to office, will become co-workers with the missionaries, equal in rank and standing” (The Indigenous Principle In Reformed Mission Strategy With Special Reference To The Nigerian Mission Of The Christian Reformed Church, Thesis for the Master of Theology degree, Westminster Seminary, copy available at the Christian Reformed Board of World Missions, Grand Rapids, pp. 87, 88).

What Berends writes certainly has merit. What he wishes to avoid, viz. missionary paternalism, certainly must be avoided. But some of the problems remain. Is Berends proposing that the missionaries hold some kind of dual church membership: membership in the newly organized mission church while maintaining their ministerial status in the sending church? To whom then are the missionaries accountable for their preaching, doctrine, and walk of life? There is no indication that the apostle Paul, who was sent by the Holy Spirit through the church at Antioch, became a member of any of the churches he organized. Would not the danger exist that the missionary become an autocrat in the young church? Is there any indication in the New Testament that a group may be instituted as a church without having elders and deacons who meet the requirements for those offices set forth in Scripture? We think not.

It would be better and proper that the missionary preach and teach without hastily organizing a church. When by means of the preaching and teaching suitable candidates for office emerge, these must be instructed in the duties and calling of the office of elder and that of deacon. Assuming that the group has reached an acceptable level of understanding of the Scriptures and the creeds of the church they can be properly organized as an indigenous church. Provision must also be made for the instruction and preparation of native pastors. These native pastors would indeed become coworkers with the missionaries, “equal in rank and standing.” At this point, in fact, the missionaries ought to leave the care of the church in the hands of the native pastor and his fellow elders and deacons. Just how long all this might take is a question that can be answered only on the mission field itself.

Once this level has been reached we agree with Berends when he writes: “This Biblical pattern fully recognizes the responsibility of all church members in terms of self-propagation. All members will participate in the ministry of the church. This will not just be a matter of evangelism, but a full ministry of service and proclamation. This ministry will grow as the Spirit equips the church through the gifts bestowed on its members. Bible studies like those proposed by Nevius, would ensure a Spirit-filled and mature congregation, able to minister not only to one another, but also to those outside the church.

“Self-support would also be a natural development. This could mean that the local people would contribute to the support of the missionaries. But as Paul pointed out, this is not essential, and it must not become a burden to the people. What is essential is that they should learn to participate in supporting the total ministry of the church. This may include participating in the building of church buildings and other facilities, contributing to the wages of new church workers, and providing what is necessary for the ministry of mercy” (The Indigenous Principle . . . , pp. 88, 89).

We shall continue these studies, D.V., with an examination of the views of Rufus Anderson, an American contemporary of Henry Venn. 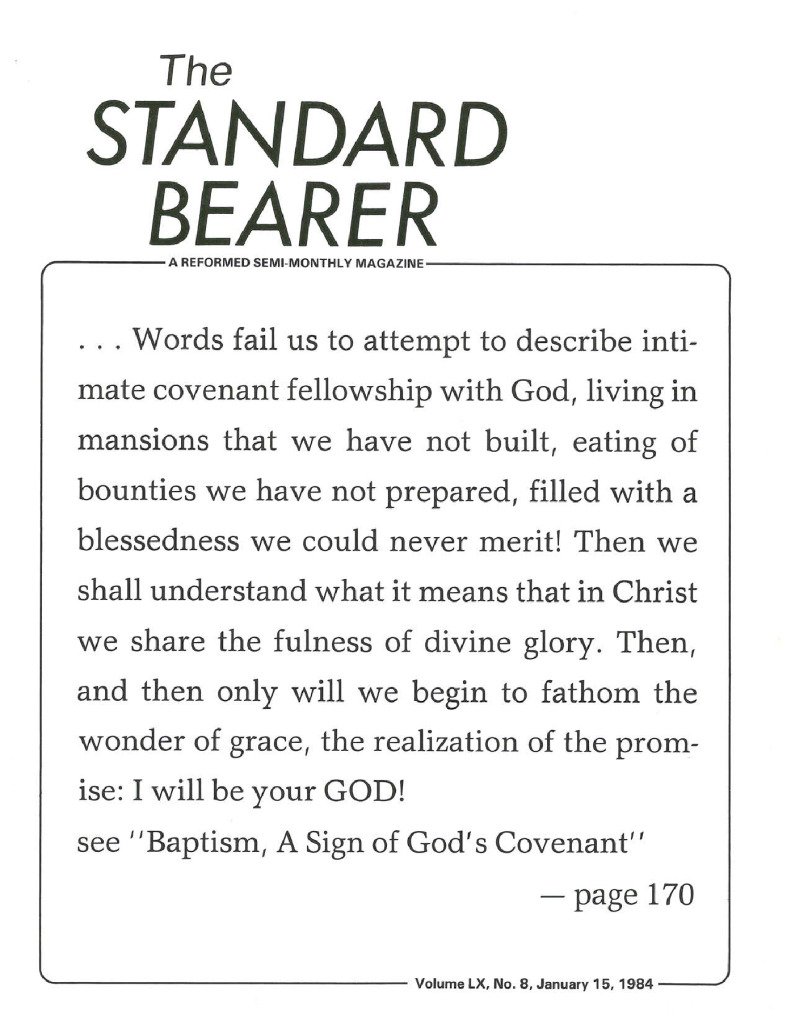